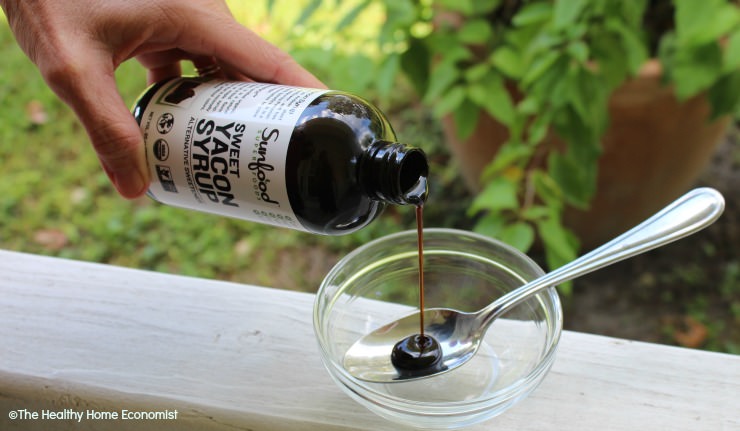 Yacon is a species of perennial daisy native to South America. It is a close relative of the sunflower and Jerusalem artichoke and has been cultivated and consumed traditionally from Colombia to northern Argentina since pre-Incan times.

Succulent, tuberlous yacon roots, not to be confused with the turnip-like legume jicama in Ecuador, have been used as food and a medicine by local populations for centuries, but its popularity has spread beyond its native range with availability in urban markets only since the year 2000.

The primary modern interest in yacon is for use as an alternative sweetener particularly for diabetics or those trying to lose weight.

The yacon tubers from which yacon syrup is made look like sweet potatoes but taste sweet like a fruit. The dark syrup of medium thickness made from concentrating the juice of yacon roots is very rich and tastes like a cross between molasses and maple syrup. In addition, yacon syrup has an ultra low glycemic index which means that it is absorbed much more slowly than other sweeteners which prevents a sudden insulin spike.

Below is a list of some of the most popular sweeteners in the healthfood community with their corresponding glycemic index. The lower the number, the less pronounced the insulin spike when consumed.

Clearly, yacon seems like a dream come true as an ideal sweetener given its extremely low glycemic index combined with a delicious, rich and very sweet taste.

In addition to a low glycemic index, yacon has a lower caloric content than other sugars. This is due to the special type of sweet tasting, low molecular weight carbohydrate called fructooligosaccharides (FOS). In fact, yacon has the highest concentration of FOS of any plant on the planet – up to 50%.

FOS are chemically composed of 1 molecule of glucose connected to between 2 and 10 fructose molecules. The bonds that connect the molecules of fructose are not broken down by enzymes present in the human digestive tract. FOS is therefore able to reach the colon without being broken down and digested by the body. It is for this reason that FOS have a low caloric value for humans (25-30% of the calories possessed by other sugars).

Besides being sweet and naturally low calorie, FOS is healthy for the digestive tract as well. It is considered a prebiotic, a type of soluble dietary fiber that encourages the growth of favorable intestinal flora. FOS does this by acting as food for these organisms similar to resistant starch. It is important to note that prebiotics are not alive like probiotics are. Prebiotics like FOS are a functional food, whereas probiotics are living organisms.

By nourishing these helpful microbes known as probiotics, a “prebiotic effect” occurs where there is an increase in the activity of healthy bacterial colonies such as bifidobacteria and lactobacilli. This strengthens the gut environment and provides resistance to invading pathogens thereby shoring up the immune system.

The great news is that prebiotics like FOS are not destroyed by heat, and so, to a large extent, remain unaltered during the cooking or baking process. It also ensures that they will reach the intestines unaffected by the digestive process in order to trigger the beneficial prebiotic effect.

Benefits of Yacon to Digestion

Other benefits of FOS to digestion include:

These combined effects are helpful in the prevention and control of constipation.

Other favorable health effects have also been associated with the fermentation of FOS in the colon including an overall strengthening of the immune system, higher absorption of calcium and other minerals, and inhibition of the production of toxins and other carcinogenic substances in the colon.

It certainly appears like yacon is a beneficial sweetener to use in the home as the compound responsible for its sweetness known as FOS does not increase the amount of glucose in the blood (low glycemic index) and it strengthens the gut environment and overall immune system. In addition, it is low calorie and totally natural to boot.

What about the processing?  Is that ok too? Let’s take a look.

When I first began investigating the use of yacon in our home as a sweetener, I was skeptical. I was primarily concerned that the processing would be similar to agave. Like yacon, agave is also touted as a healthy, natural, low glycemic sweetener that is helpful for those with blood sugar issues. In truth, however, agave nectar is a highly processed sweetener with no redeeming nutrient value whatsoever.

Here are some of the biggest issues with agave as a sweetener:

How Yacon is Processed into Syrup

What about the processing of yacon into yacon syrup? Here’s the process as I’ve determined by reading about it in detail:

Processing of the Roots

Processing of the Juice into Syrup

Is Any of This Processing Problematic?

After thorough review of the processing of yacon into yacon syrup, I really could not find a reason not to use it in moderation in my home. The processing is not excessive nor does it use caustic chemicals at least when an organic brand is selected (this is the one I’ve tried).  In fact, the processing of yacon tubers into yacon syrup seems to be something that could be done yourself if you have the wherewithal and access to a maple syrup type evaporator.

Of course, as with any sweetener, yacon should be used in moderation. FOS in large amounts can induce digestive distress as it is a fiber source. Just because it is low calorie and has a low glycemic index does not give license to overdo!

Yacon Syrup a Much Better Choice than Sugar Alcohols

Yacon has more than a little competition in the alternative sweetener department with the most popular known as sugar alcohols.

Sugar alcohols are interestingly comprised of neither sugar nor alcohol. The most familiar of these are xylitol, erythritol, mannitol, and sorbitol.

Consumers have been led by aggressive marketing to view sugar alcohols as healthy because they are not artificial like aspartame. Like yacon, these products have low glycemic indexes and are marketed to diabetics and those who wish to lose weight as ideal sugar substitutes because they are derived from natural plant based sources.

However, unlike yacon, sugar alcohols are highly processed, frequently come from genetically modified sources, and have the potential to negatively affect the intestinal environment for those who consume them. This occurs via disruption of the balance of beneficial intestinal flora by encouraging pathogen growth in the gut.

If you need a sweetener with an ultra low glycemic index that is also low calorie, yacon is the far better choice than any sugar alcohol on the market!

Yacon Tea Not a Good Choice!

While yacon does indeed appear to be a healthy alternative sweetener when used in moderation, if you regularly consume soy in your diet, it is best to skip it and choose another sweetening option. This is because the unusually high level of fructooligosaccharides (FOS) in yacon appears to increase the absorption of the isoflavones in soy which has the potential to disrupt hormonal balance over time. Remember also that the isoflavones in soy have been found via research to be present in the yolks of hens fed soy based feed so this is another source of these phytoestrogens that can easily go unnoticed (2).

How Bulletproof Coffee Shoots You in The Foot