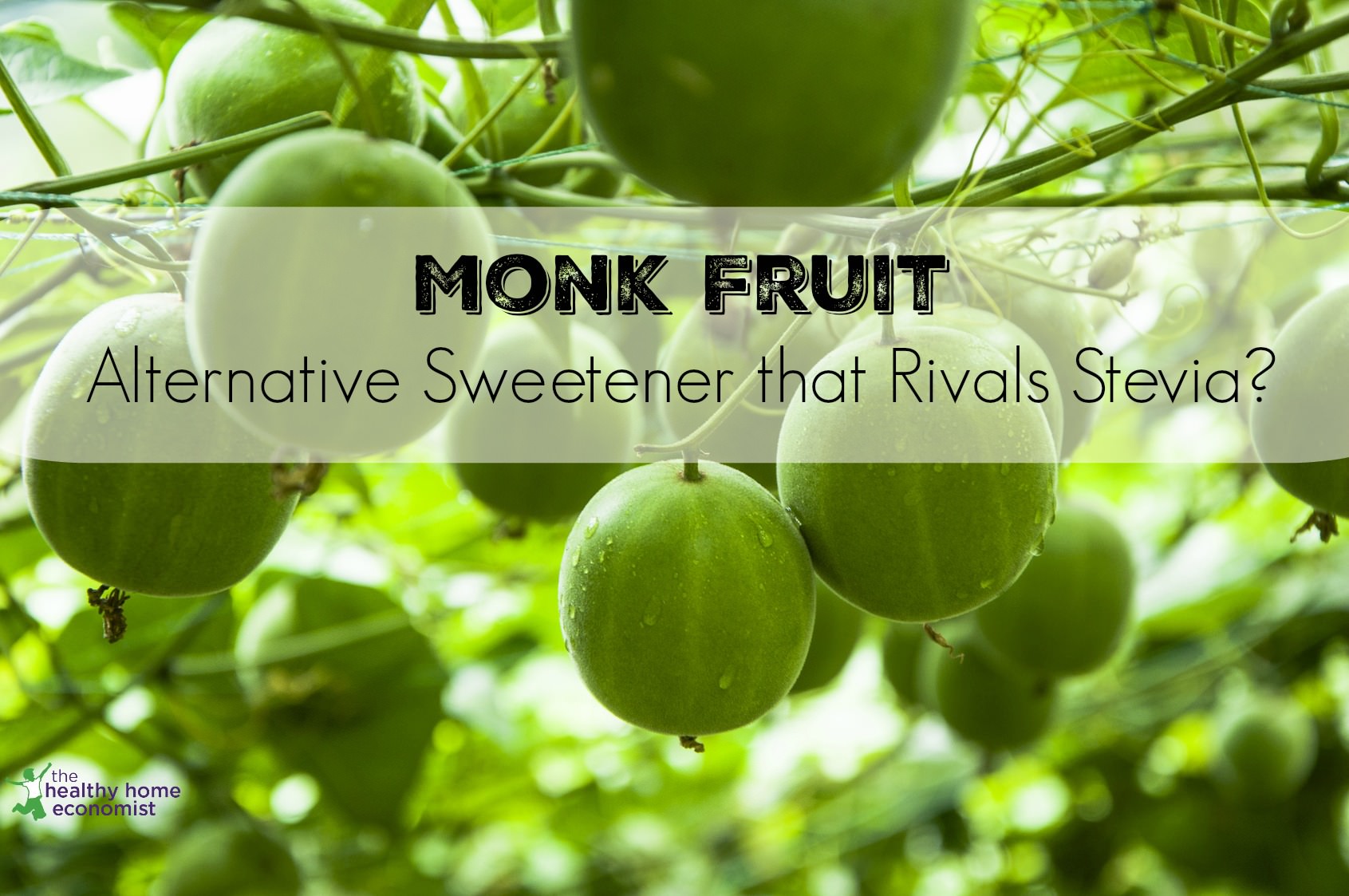 Do you like cucumbers? If so, its cousin monk fruit, also known as luo han guo, may interest you. You may have even eaten monk fruit extract without knowing it!

Monk fruit is a small, subtropical melon that grows on a herbaceous perennial vine of the cucurbit family. It is native to southern China and northern Thailand, where populations have cultivated it for hundreds of years.

Monk fruit has a long history of use as a low calorie sweetener and within Traditional Chinese Medicine (TCM). Modern monk fruit extract is 300 times sweeter than sugar with no calories. In addition, the glycemic index is zero making it suitable for diabetics. (1)

The powerful sweetening ability combined with no caloric value or glycemic index makes it very similar to stevia.

What makes the extract so sweet? While monk fruit contains glucose and fructose, these are not what give monk fruit its magic. Rather it is a family of chemicals called mogrosides.

These substances are similar to those found and stevia. They are intensely sweet with a very slight aftertaste. This makes monk fruit extract similar to stevia extracts, albeit with a very different flavor. The two alternative sweeteners are often compared and contrasted for this reason.

Monk fruit has a long history of safety for both adults and children. Unlike some other new, low to no calorie sweeteners such as Swerve or xylitol, it has no known side effects or negative health impacts when used in moderation. (2)

How Luo Han Guo is Made

Monk fruit was discovered by the West in the early 1900s. The process for making and using it was fairly simple back then. Moreover, artisans could make it by hand.

Let’s compare and contrast the old fashioned versus modern methods of creating a sweetener from monk fruit.

Farmers collected the monk fruits when very ripe. The next step involved a slow, thorough drying, usually in ovens. This helped to remove certain unpleasant aromas.

Artisans sold the monk fruit in this brown, dried form. Unfortunately, the traditional drying technique also creates a number of bitter and astringent flavors. While helpful for medicinal use in teas, soups, and a few other applications, these competing flavors restrict the fruit’s use for sweetening.

Procter and Gamble was the first to secure a US patent for extracting the intensely sweet mogrosides from monk fruit. Details about the patent and extraction process are outlined in detail here.

A few things stand out without getting too deep into the modern manufacturing process.

The process of claim 3 in which the juice is acidified with an acid selected from the group consisting of citric acid, malic acid, lactic acid, tartaric acid, acetic acid, phosphoric acid, sulfuric acid, hydrochloric acid and mixtures thereof to a pH of from about 3.8 to 4.2.

Whatever all this industry-speak means, it should make us wonder about the purity of the final extract. Similar to many other traditional foods processed using factory methods, the problem isn’t that they don’t have traditional roots, but that modern processing contaminates and pollutes them with all sorts of non-traditional and potentially toxic substances.

Hence, while modern processing of monk fruit is generally fast and consistent, it may not be clean and healthy. Buyer beware and do your homework by investigating the particular processing used by the brand you buy.

While Proctor and Gamble holds the first patent for monk fruit processing in the United States, an Australian company currently claims to control as much as 90% of the market. The company also states that they have a way to extract and process the fruit using only water. If true, this gives monk fruit extract a significant advantage over stevia extracts. The company notes:

Only water is used in the extraction/processing. The mogrosides are separated from the fresh-pressed juice of the monk fruit that contains carbohydrate sources, fructose and glucose. And that could be a key advantage over stevia. A true “natural” claim for some stevia could be questioned, as some suppliers of that plant-based sweetener use solvents to extract the steviol glycosides. (3)

If the claims of this company are fully accurate, monk fruit extract should be the first choice of consumers seeking to limit caloric sweeteners in their diet. While green stevia powder and stevia extract made at home would be equally good choices as well, factory processed stevia extracts are frequently not a good choice.

Where Do You Find Monk Fruit Sweetener?

Finding the whole, natural monk fruit as pictured above is unlikely in most American grocery stores as of this writing. An increasing number now carry monk fruit extracts, however. These extracts are normally not pure fruit, however.

It is more likely that you will encounter monk fruit sweetener in a number of low or no calorie and low or no sugar products. One such example is Norbu, an Australian sweetener comprised of monk fruit and erythritol. (4)

Many processed and prepared goods that target health conscious consumers contain it too.

Other examples of specific product brand names containing monk fruit sugar or a blend with other alternative sweeteners include: (5)

Since so many new companies now manufacture monk fruit sweeteners, it is important to find out what methods they use for extraction and processing.

Some are now even using fermentation for the extraction of the mogrosides instead of solvents. This is a very promising trend!

However, it is always best to assume nothing. Since the industry is new, always ask questions before purchasing!

Also, note that many products marry alcohol sugars to luo han guo to form a blended sweetener. This may or may not be clear on the label, so be sure to check ingredients carefully!

Thus, while monk fruit itself is generally safe, these other less desirable sweeteners are known to cause issues in some people especially if over consumed. If the label doesn’t make it perfectly clear what the product contains, don’t purchase it!

Monk Fruit Extracts: To Use or Not to Use?

First, note that one reason people are trying to find low or no calorie sweeteners is because we are so HOOKED on sugar.

Foods that should contain no sugar and never did traditionally now contain it. This is known in the culinary arts as the “sweet savory wall”.  Examples include foods like salad dressings, vinegars, condiments, savory dishes, and so much else. Over the past forty years, food processors have continued to breach the sweet savory wall with consumers becoming unwitting sugar addicts. You can learn a whole lot more about this on this recent radio show.

The use of a safe, water extracted monk fruit sweetener can be a helpful tool to help reduce our reliance on these processed sugars. It can also serve an important role for those with health conditions that require them to reduce their sugar and carbohydrate consumption.

But culturally, we need something more! We also need to work to regain appreciation for the other flavors real foods provide – sour, bitter, savory, and so many others – not just sweet.