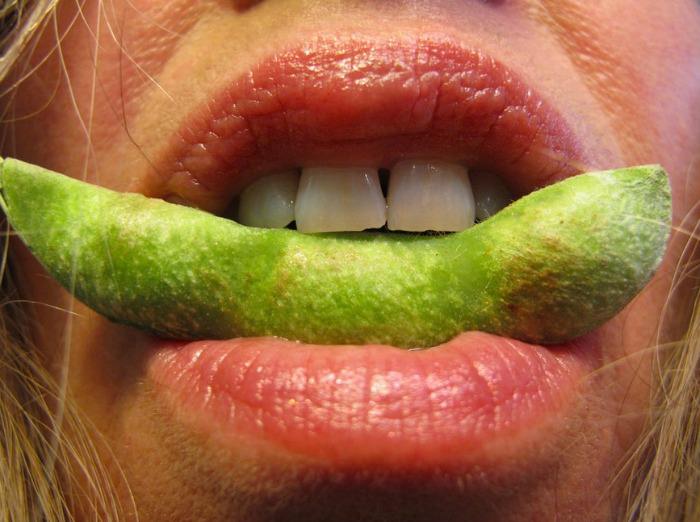 With all the loads of scientific data available that soy (even edamame) is not a healthy part of anyone’s diet, it shocks me how many folks are still on the “soy is good for you” bandwagon – even people who should know better like your doctor!

I just got an email from a reader the other day who had been to multiple doctors, both holistic and conventional, and all but one of them were telling her that plenty of soy in her diet would help her menopause symptoms.

I had another shocking conversation recently with a doctor of Internal Medicine who had no idea soy was a potent goitrogenic food and actively suppressed thyroid function.

Be careful folks.  It’s dangerous out there! You really need to do your research and be on your toes at all times when it comes to nutritional advice even from someone in a white coat!

For those of you who just sat down because you are so taken aback by the notion that soy is not actually the healthfood you thought it was, here are 170 scientific reasons to back up this assertion.

Fermented Soy Fine in Small Amounts for Some People

Please note that fermented soy in small, condimental amounts as practiced in traditional Asian cultures is fine for those who have healthy thyroid function. Only miso, tempeh, natto and traditionally brewed soy sauce fall under this category. In addition, if you want to sprinkle a few edamame on your salad or have a few small cubes of tofu in your miso soup from time to time, that is fine too. A little soy lecithin in a nonGMO snack food from time to time isn’t necessarily a problem either. Just don’t make it a regular part of your diet!

If you have any sort of thyroid issues going on, however, it is really the best policy to avoid all soy all the time as soy is a potent goitrogen (thyroid suppressor) even if fermented.

Still think munching on edamame instead of popcorn is a healthy habit?

Six premenopausal women with normal menstrual cycles were given 45 mg of soy isoflavones per day. This is equivalent to only 1-2 cups of soy milk or 1/2 cup of soy flour!   After only one month, all of the women experienced delayed menstruation with the effects similar to tamoxifen, the anti-estrogen drug given to women with breast cancer (American Journal of Clinical Nutrition 1994 Sep;60(3):333-340).

Estrogens consumed in the diet at low concentrations were found to stimulate breast cells much like DDT to increase enzymatic activity which leads to breast cancer (Environmental Health Perspectives 1997 Apr;105 (Suppl 3):633-636).

Don’t eat soy when you are pregnant ladies!  Scientific research has shown that the developing male fetus which is exposed to soy phytoestrogens may suffer from higher susceptibility to prostate cancer later in life (Prostate 1994;24(2):67-78).

Keep that soy away from your daughters!   Dietary genistein (soy phytoestrogen) in developing female rats had the effect of significantly accelerated puberty (Toxicol Sci 1999 Oct;51(2):236-44).

Hey guys! Soy protein powder strips your masculinity!  A study of 12 men aged 18 years and older experienced a 19% drop in serum testosterone in only 28 days when supplemented with 56 grams of soy protein powder over that same time period (Prev 2007;16:829—33).

Do NOT feed soy formula to your babies!  Female newborns who are orally exposed to genisin, the glycosylated form of genistein (soy phytoestrogen) experienced harm to the reproductive system in the form of “delayed vaginal opening… abnormal estrous cycles, decreased fertility, and delayed parturition.” (Environmental Health Perspective 2009 Dec;117(12):1883-9).

More information on the dangers of soy infant formula even if organic can be found in this article.

Convinced yet?   I don’t know about you, but ten reasons is plenty for me!   Still interested to see the remaining 160 reasons?  My friend Dr. Kaayla Daniel, author of the must read The Whole Soy Story, has compiled the rest of the list for you if you click here.

The Dangers of Estrogenic Food, Herbs and Supplements to Breast Health

Komen (Not) for the Cure

Even Organic Soy Formula is Harmful for Babies

Is Your Egg Allergy Really a Soy Allergy in Disguise?

7 Healthy Ways to Use Matcha in the Kitchen