Beet sugar is one of the most cultivated sweeteners in the world and one that the food industry relies on heavily for processed food production. How smart consumers are avoiding it at all costs, and which healthier and safer alternatives they are choosing instead. 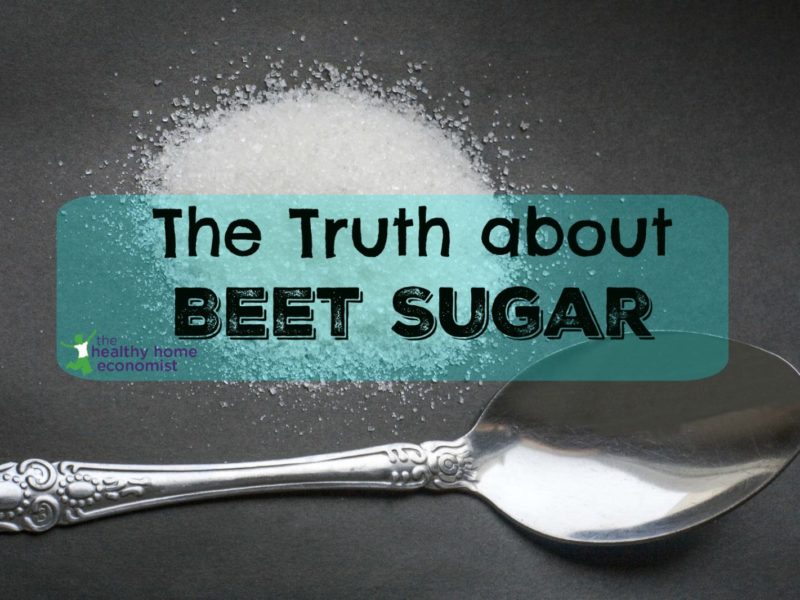 When it comes to natural sweeteners, beet sugar seems like an excellent choice. I mean, sugar coming from vegetables? We all need to eat more of those, right?

Beets are certainly one of the most nourishing and detoxifying of the root vegetables. The traditional tonic known as beet kvass comes to mind here. Maybe the sugar from them would be healthful too?

The trouble is, beet sugar is one of the very WORST sweeteners on the market today. And if you eat anything processed in North America that contains added sugar, you are probably eating it whether you know it or not.

That’s why out of all the sweeteners on the market today, you should “Just  Beet It” far, far away!

How did we end up with beet sugar?

How did a healthful vegetable like beets ever become a major player in the processed sugar industry? Well, it all comes back to the lowly sugar beet. Unlike its more earthy brothers and sisters, the sugar beet has a very special power – accumulating sucrose in its roots. As far back as the late 1700s and early 1800s, people were growing them and trying to extract the sugar from them.

Today, sugar beets account for HALF of all refined sugar production in the United States, and around 20% of all sugar in the world! Cane sugar and beet sugar are the two processed sweeteners that most of the world’s processed food industries are built upon. (1)

While beets are a nutritional powerhouse, especially in fermented beverages like beet kvass, beet sugar isn’t. The processing of the beets results in the same end product as sugar cane processing – pure white sugar. Once refined, it has no nutritional value beyond the calories it contains. Calories are not something most people need more of! Incidentally, visually and taste-wise, beet sugar is completely indistinguishable from refined cane sugar.

You can read more about how beets are processed into sugar here and here. In sum, sugar from beets mimics other modern food production. It is a chemical, machinery, and energy-intensive enterprise that requires extensive processing and numerous steps to create a foodstuff with no nutritional value and a high (64) glycemic index. Suffice it to say that creating beet sugar in your kitchen would be next to impossible!

Is brown sugar from sugar beets a healthier option to white beet sugar like it is for cane sugar? Unfortunately not.

You see, the molasses from sugar beets is not fit for consumption. It is eliminated during processing. Hence, when you see brown beet sugar, it is actually white beet sugar with added molasses from cane sugar! It isn’t any less processed at all!

In fact, much of the conventional brown sugar on the market actually is white beet sugar in whole or in part mixed with cane sugar molasses. This is due to poor labeling requirements in North America that do not require identifying GMOs.

You see, sugar beets aren’t just another commodity feeding the industrialized food beast. They are one of Monsanto’s GMO foods par excellence, and one that has crowded out any and all other types of sugar beet production in the United States.

Beet sugar is GMO sugar. You can take that one to the bank. And when it comes to Monsanto shareholders, they do! 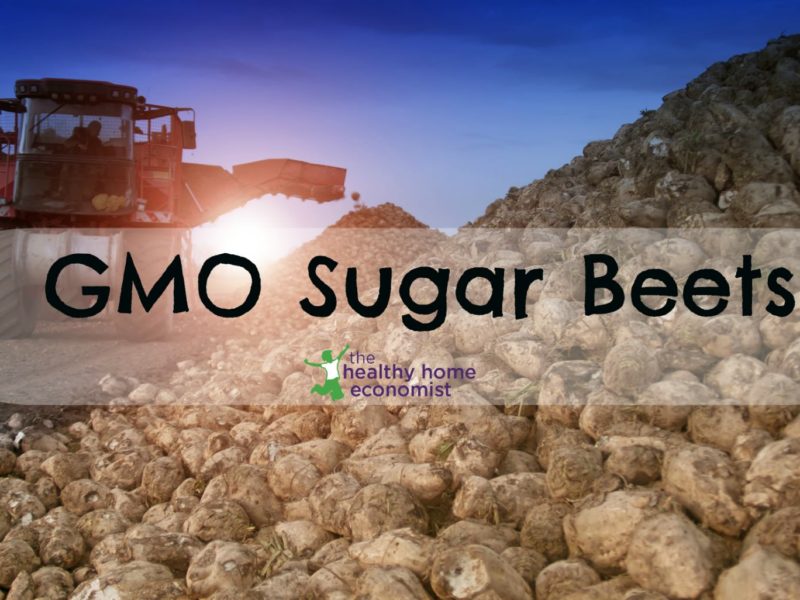 The species [of sugar beets] at issue (Beta vulgaris) is one of the few vegetable crop species that is wind pollinated. Some insect pollination occurs in beets, but wind accounts for most pollination events. Furthermore, beets are self-incompatible, meaning each plant must have pollen from a genetically different individual to produce viable seed. Table beets and chard have large numbers of flowers per plant and produce large amounts of pollen.

Crops within the Beta vulgaris species are fully sexually compatible and mating between any two of these crops will occur if they flower in proximity to one another, as pollen from one will readily fertilize any of the other’s flowers, resulting in viable offspring that produce viable seed. Research shows that beet pollen can travel for miles. There’s no realistic distance that completely isolates two cross-pollinating crops 100 percent of the time, especially in a highly concentrated seed production location like the Willamette Valley [Pacific Northwest], where OSA has ongoing breeding projects with farmers. (3)

What other crops do sugar beets contaminate? Other varieties of beets for one (both red and gold), but also chards. Both of these vegetables are organically and conventionally grown in abundance in the same areas as GM sugar beets. The two states Washington and Oregon account for over 80% of US chard and table beet production. What’s more, 50% of the world’s chard and table beet production comes from this area as well.

Thus, many varieties of nutritious beets and chard now run the risk of GM contamination.

GM beet production has adversely impacted hundreds if not thousands of other farmers, including organic ones. As for me, I don’t care to support any industry whose existence causes the destruction of other people’s farms and businesses!

While glyphosate via Monsanto’s Roundup-Ready sugar beets causes other farms to go away, it doesn’t do it to itself! Numerous recent studies show that glyphosate persists in soil and food far longer and in far greater amounts than what the makers, manufacturers, and processed food industry want people to know.

Glyphosate residues were detected in 29.7 percent of all food samples, with 1.3 percent containing residue levels above MRLs [Maximum Residue Limits]. For the grain products tested, 3.9 percent had residue levels about MRLs. (4)

In other research, analysis of close to 8,000 foods from Canada and tested by the Canadian Foods Inspection Agency (CFIA) indicates that seed-based foods produced in North America contain worrisome concentrations of glyphosate. The highest in the world, in fact. Provinces in or near the Pacific Northwest, where GMO sugar beets are grown in abundance, produced foods with the highest concentrations of foods collected elsewhere in Canada. (5)

Also note, glyphosate is just one residue in foods treated with this herbicide. As it breaks down, a number of metabolites with known and unknown health risks, especially aminomethylphosphonic acid or AMPA, also persist in the food. They are now showing up in drinking water too.

Unfortunately, it appears no one is testing for these metabolites regularly! Certain groups are trying to raise the alarm, but the GM food industry led by Monsanto and regulatory branches in the US and Canada appear unwilling to care or act. (6)

Ultimately, it is up to the consumer to reject GMO beet sugar and anything made with it to force the industry’s hand with plummeting profits. When it comes to sugar, buying organic is critically important for the planet as well as our own health!

The only good news about GM beet sugar is that the candy industry has started to say, “just beet it!” to them! But this silver lining isn’t all it seems. Cultivation is a choice between glyphosate and a chemical cocktail “witches brew” as sugar beet Farmer Beyer describes it:

Beyer says that he and his fellow sugar beet farmers are thinking about going back to growing non-GMO beets. They couldn’t do it quickly; right now, there aren’t enough non-GMO seeds to go around. And they would prefer not to do it. Planting genetically modified sugar beets allows them to kill their weeds with fewer chemicals. Beyer says he sprays Roundup just a few times during the growing season, plus one application of another chemical to kill off any Roundup-resistant weeds. He says that planting non-GMO beets would mean going back to what they used to do, spraying their crop every 10 days or so with a “witches brew” of five or six different weedkillers. (7)

Now, as a farmer myself, this strikes me as insanity. The only way to grow sugar beets is either with multiple applications of glyphosate or multiple applications of other dangerous chemicals? Unfortunately, this is how a lot of conventional farmers think. They are married to a broken approach to food and farming. A safe, alternative way to produce food without harming those who eat it and the environment in the process is not even considered as a possibility!

We have a long way to go folks! 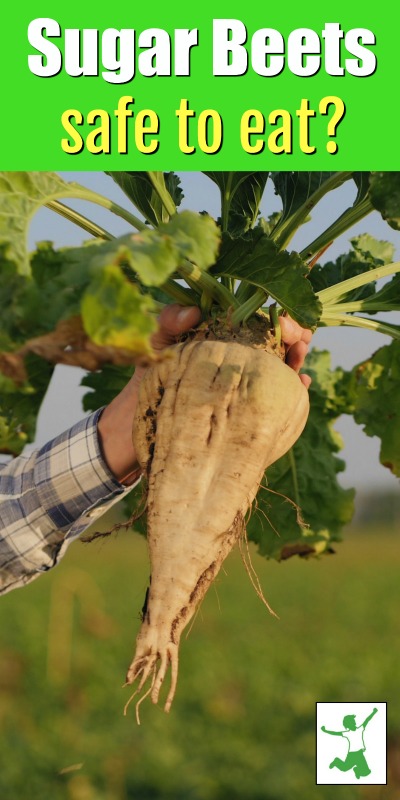 Perhaps it is true that sugar beets just can’t be grown without chemical agriculture to prop them up. But that just shows that we shouldn’t be growing them for sugar in the first place. This is especially true when we have so many other awesome options available that don’t need intensive chemical agriculture!

As a consumer, it is important to be informed and spend your food dollars on natural sugars that aren’t just healthy – their cultivation shouldn’t harm the environment in the process either. Consider truly healthy, delicious, and sustainable alternatives instead such as date sugar, raw local honey, dark maple syrup, cane or coconut jaggery and coconut sugar.

This is not enough, however, Be sure to buy organic when it comes to sweetened processed foods. Otherwise, you are almost certainly supporting the sugar beet industry with your hard-earned dollars.

Remember the words of Farmer Beyer above. Even if economic pressure forces sugar beet producers to go back to non-GMO, this doesn’t mean natural. It doesn’t even mean more environmentally friendly. No matter what, you should just keep saying “just beat it” to sugar beets and beet sugar!