Brown rice syrup is widely considered a healthy alternative to white sugar and high fructose corn syrup. It is a common ingredient in gluten free and organic foods. Scientific research and analysis of the manufacturing process uncovers reasons to be cautious with its use, however. 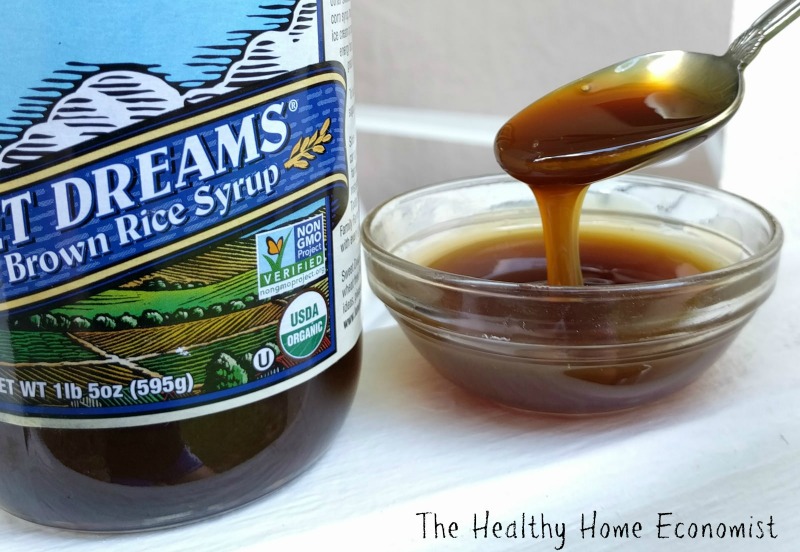 The average person consumes around a cup of refined sugars every single day. This is 16 tablespoons per day and adds up to just shy of three pounds per week, or 152 pounds per year! In 1970, Americans ate 123 pounds of sugar per year, and 100 years ago, it was half that amount (1).

With so much scientific research demonstrating the health disaster of eating this much sugar every day for months and years on end, food manufacturers are cashing in on people’s attempts to avoid it. This trend is most especially pronounced in processed foods at the health food store. Brown rice syrup or organic brown rice syrup (OBRS) is a sweetener frequently used as an alternative to white sugar and high-fructose corn syrup (HFCS) in organic and health food products.

For example, organic infant formulas rely heavily on brown rice syrup, sometimes exclusively, as the sweetener. This is a headscratcher considering that human breastmilk contains lactose in amounts higher than goat or cow milk! Fortunately, parents are starting to wise up, eschewing these organic yet unhealthy concoctions. A strong trend toward making homemade baby formula continues to gain ground with well-researched parents.

Infants and babies aside, is brown rice syrup really a problem for older children and adults in small to moderate amounts? Is it a better ingredient than high fructose corn syrup and white sugar usually of GMO origin?

Let’s take an in-depth look at this source of sugar in the Western diet that is widely considered to be healthy. There is much we need to know about brown rice syrup (BRS) before buying foods containing it.

Looking at brown rice, one wouldn’t initially think it’s a great candidate as a sugar source. A super-high starch content coupled with modern chemistry and commercial techniques make it so. The starch in rice is exposed to particular enzymes, which break it down into various sugars. Generally, the resulting process creates maltotriose (52%), maltose (45%), and glucose (3%).

While the first two sound fancy, they are just joined-up glucose molecules (three for maltotriose and two for maltose). Chemically speaking, brown rice syrup is basically pure glucose with a glycemic index (GI) of 98 out of 100! (2)

Once broken down, the impurities are filtered out. At this point, no one would be able to identify that the syrup came from rice. Where did we ever get the idea to make this stuff?

Surprisingly, some traditional cultures actually did use brown rice to create a sweet rice syrup. But the process looked very different, as did the end product.

The traditional practice added a small number of sprouted barley grains to cooked brown rice in a solution of heated water. The enzymes supplied by the barley digested the carbohydrates, proteins, and lipids in the brown rice to produce a sweet solution. This mixture was high in simple carbs with small amounts of amino acids and lipids remaining.

The grains were then strained out and the liquid boiled to remove the water and create a thickened mixture that looks a lot like yacon syrup. Unlike modern brown rice syrup, the traditional version contained very little glucose and up to 10% protein. (3)

Thus, as traditional food, BRS retained most of its nutritional value when prepared carefully. It was also consumed in small amounts. This versus an industrialized version that is highly refined and often added as a primary ingredient to addictive processed “health” foods and organic baby formula.

How does the nutritional value compare?

While brown rice has a fair nutritional profile, brown rice syrup is almost fully devoid of nutrients. This is surprising given that the color is dark brown giving the impression that it is loaded with minerals like maple syrup, blackstrap molasses, or malted barley.

It is quite a shock to learn that it also has a very high glycemic index (GI). Coming in at a staggering 98 out of 100, it ranks higher than almost every single other processed sugar. This includes refined white sugar with a GI of 80 and high fructose corn syrup with a GI of 87!

While BRS definitely qualifies as empty calories, this is not the worst of it. These empty calories, unfortunately, come with a killer sidekick – arsenic. Studies show that modern brown rice syrup keeps nearly all the arsenic in brown rice, but little else. (4)

So, with brown rice syrup, we get a simple sugar with none of the nutritional benefits. In other words, calories at a high metabolic cost (high GI). And to top it all off, a load of toxic arsenic!

Why are food manufacturers putting this junk in organic baby formula? Lest you might think that the “organic” somehow makes it healthier, know that researchers discovered arsenic in brands of organic baby formula at levels 6 times that considered safe in the water supply by the EPA.

For people who are exposed to arsenic in their environment via well water, drinking water, or other avenues, this news is especially concerning. Doubly so for their children if they are mixing baby or toddler formula that contains brown rice syrup, even ORGANIC.

Organic brown rice syrup is no better than conventional when it comes to arsenic contamination.

Soy and arsenic, ugh! Is this really what we want to be giving developing babies???

Brown rice syrup is a favorite sugar in many other foods, including so-called healthy foods like cereal and energy bars and some sports and energy drinks. Correspondingly, those same foods show elevated levels of arsenic when tested. Researchers found the following after testing 3 commercially available brown rice syrups, 29 cereal bars (18 with OBRS), and 3 high-performance “energy shot blocks” with OBRS.

All 29 cereal bars tested contained some arsenic, but those without any rice-based ingredients had the lowest levels. Nearly 60% of the others contained inorganic arsenic. The three energy shot blocks contained enough inorganic arsenic that if an individual were to consume the manufacturer-recommended four servings during a two-hour workout, they would ingest the equivalent of drinking a liter of water containing 10 µg/L arsenic; total arsenic would be twice that. (7)

Why (IN THE WORLD) is Rice Syrup Considered Healthy?

With all the hubbub about Americans consuming too much sugar, a lot of attention has been given to the types of sugar we consume. Fructose started to receive special attention as a sweetener that was possibly more damaging to our health than others. So, some companies started looking for alternatives to fructose based sugars, opting for those made primarily of glucose, like brown rice syrup.

Even worse, brown rice syrup is pure sugar served with a side of arsenic. A true double whammy to our well being.

Seek to minimize your exposure to brown rice syrup. Just like any other processed and refined foods, even if organic, it is ultimately a factory food not manufactured according to traditional wisdom.

Let’s add a practical caveat to all this gloom and doom.

An occasional organic food that contains BRS is probably of little concern. However, as an ingredient in something you consume moderately on a regular basis, a habit change is prudent to reduce exposure. And, watch out for those popular cereal bars containing rice syrup packed into your children’s lunchboxes!

If you already like to consume rice on a regular basis, make sure you are following the recommendations on how to reduce your arsenic exposure in rice. Switching to more nutritious wild rice is a good first step. 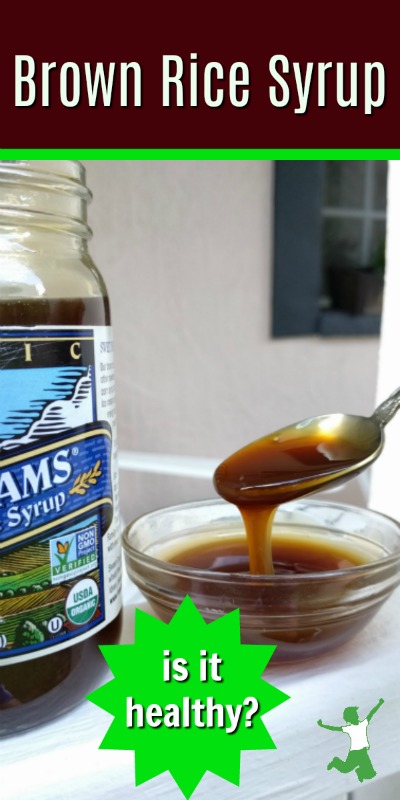 If you are gluten-free, realize that your total arsenic exposure could be a lot higher than you realize. A few gluten-free prepared foods each week, a few servings of rice, a few foods that contain brown rice syrup, and you could end up with significantly elevated levels of arsenic in your body. This warning goes double and triple for small children and pregnant and nursing moms!

As a final note, traditionally prepared brown rice syrup may not be pure, empty calories like the modern version. However, it will still probably contain elevated levels of arsenic depending on the source of the rice. Given this, I see no reason to keep it on hand or recommend it.

Many other sweeteners are much safer, nutritious, and widely available. The best of these include coconut sugar, stevia leaf, maple syrup, jaggery, date sugar, molasses, and raw honey. Consuming one like BRS that contains dangerous contaminants, even if organic, in our heavily polluted world doesn’t make any sense.

What do you think about this information about rice syrup? Do you choose to avoid it?

Cook From Scratch! Here’s Why