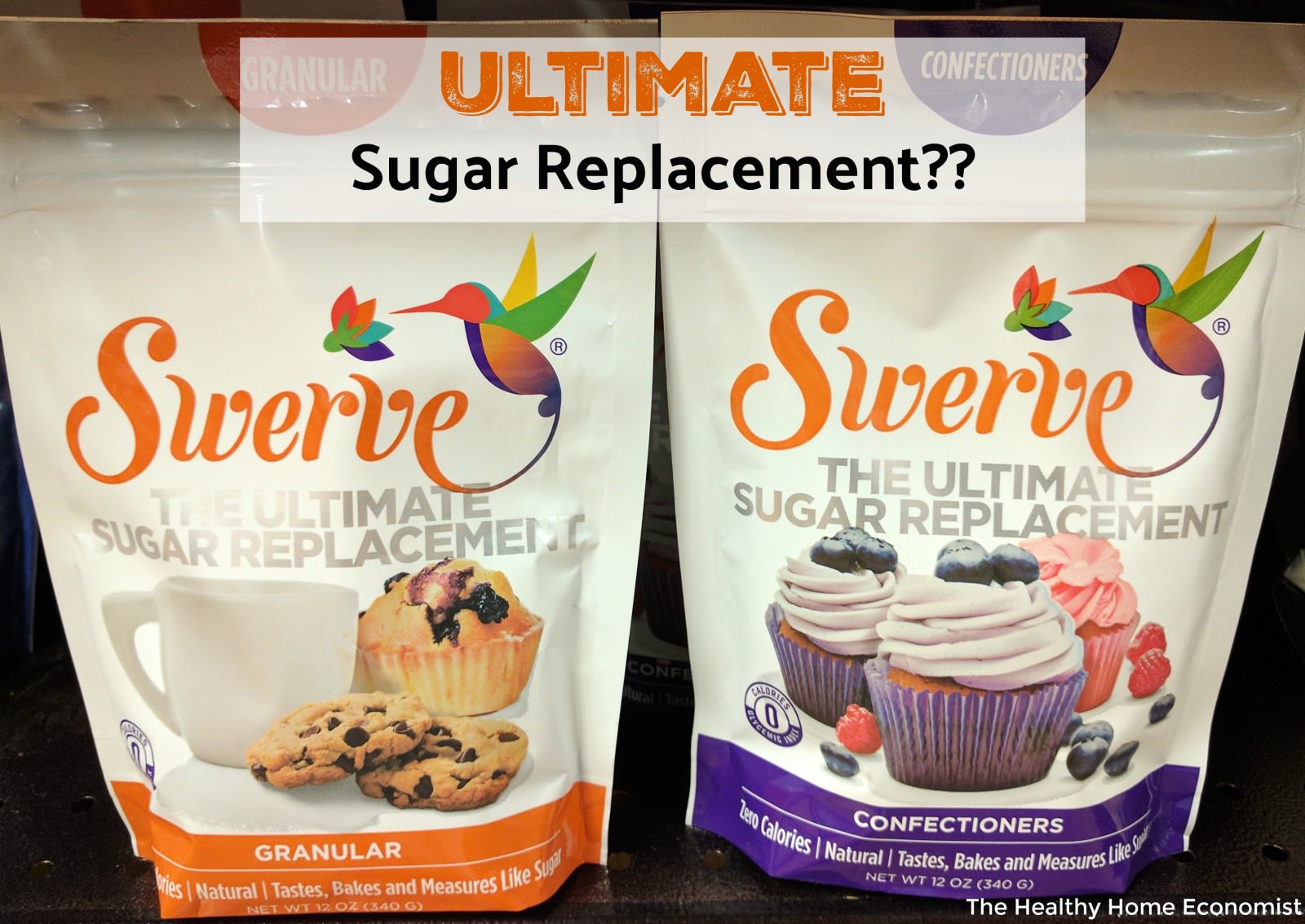 Go into a supermarket or healthfood store these days and you will be hard pressed to find products that are NOT labeled as natural. Natural is everywhere, even when a product is clearly not. Attractively presented bottles of GMO canola oil loaded with Roundup residue?  Natural!

Ice cream with added rat poison antifreeze to make it easily scoopable right out of the freezer?  Natural! Highly processed sweeteners totally foreign to anything found in Mother Nature? Natural!

So what do we do with the “ultimate” natural sweetener like Swerve that is sometimes confusingly placed right next to jars of raw honey in healthfood stores? Let’s start with its website.

What is Swerve Sweetener?

Here’s what the company that makes Swerve says about its product:

Swerve is a delicious natural sweetener that measures cup-for-cup just like sugar! Swerve is made from ingredients found in select fruits and starchy root vegetables, and contains no artificial ingredients, preservatives or flavors. It’s zero-calorie, non-glycemic and safe for those living with diabetes, since it has no effect on blood glucose or insulin levels. (1)

Wow, this sounds really cool. If I was a newbie to the healthfood store scene, I would buy this stuff in a heartbeat. Fruits and vegetables, we need more of those, right?

The problem is … the marketing spin doesn’t reveal anything about what makes Swerve Swerve. So let’s do a bit more digging.

The secret to our zero-calorie sweetness is a combination of erythritol, oligosaccharides and natural flavors. (1)

So what is erythritol? It is just another sugar substitute in the slew of sugar free, low or no calorie sugar substitutes. The trend seems dominant in the food industry over the past ten years or so. Basically, the stuff is a chemistry experiment – fermented glucose turned into an indigestible carbohydrate that is actually an alcohol. Hence the classification as “sugar alcohols”. Here’s a rundown on how food manufacturers make these chemicals.

At the industrial level, it is produced from glucose by fermentation with a yeast, Moniliella pollinis. Erythritol is 60–70% as sweet as sucrose (table sugar) yet it is almost non caloric, does not affect blood sugar, does not cause tooth decay, and is partially absorbed by the body, excreted in urine and feces. (2)

Notice that Swerve isn’t just erythritol. It contains unknown oligosaccharides and “natural flavors.” More on that below, but let’s take a moment to talk about sugar alcohols.

How do you provide sweetness without sugar and with little to no calories? Alcohol sugars. These chameleon like carbohydrates will neither make you drunk or make you fat, though some may make your teeth a bit more resistant to dental decay or give you diarrhea. Discovered in nature in a number of fruits and starchy vegetables, they are now available in unprecedented amounts to modern people who are being duped into consuming them in large, decidedly unnatural, amounts!

Alcohol sugars are another part of the “sugar free food” rage. Popular in a culture plagued with rapidly increasing rates of diabetes, they have invaded the health food and supermarket alike. A wide array of low carb and so called health foods and related products contain them from chewing gums to toothpaste to cookies and candies. They are even mixed with some products labeled as stevia. This fact only appears in the fine print of the label apparently in the hope that consumers won’t notice.

The Food and Drug Administration (FDA) chose to bless them with Generally Recognized As Safe (GRAS) status. In reality, this honestly doesn’t mean much. These chemicals including erythritol can cause stomach pains, headaches, and even diarrhea in sensitive individuals. The majority of people will suffer symptoms if they get a big enough dose. This is easy to do as these chemicals hide in a wide variety of foods to reduce the number of sugar grams on the label. This is very attractive to consumers.

The carbohydrates in Swerve come from the erythritol and oligosaccharides. Erythritol is somewhat of an anomaly in the carbohydrate world, since it’s non-caloric. Erythritol is absorbed in the small intestine and then eliminated by the body, so it’s never metabolized and can’t contribute calories to the diet.

Erythritol’s rapid absorption means very little makes its way to the large intestine. For this reason, it’s less likely—compared to other sugar alcohols like xylitol and maltitol—to cause gastrointestinal distress. (3)

Erythritol Compared to Other Alcohol Sugars

Erythritol differs from other sugar alcohols in a number of key ways. It is non-glycemic, non-carcinogenic, and non-allergenic. Also, it is far less likely than other forms of sugar alcohol – again like xylitol and maltitol – to cause gastrointestinal issues. But it does share one thing in common with its other alcohol buddies – minimal nutritional benefits. Unlike traditional sweeteners that often contain beneficial minerals, nutrients, and other substances, such as maple syrup and honey, alcohol sugars are truly empty carbs, minimally absorbed by the body, and otherwise nutrient-less.

Chris Kresser L.Ac has this to say on the issue:

Erythritol is probably the best-tolerated sugar alcohol, and a few human trials have found that if the amount of erythritol is gradually increased and doses are spread throughout the day, many people can tolerate large amounts (up to 1g/kg of body weight) of erythritol without GI distress. (4)

Additionally, Kresser notes that they may even have a beneficial, prebiotic effect, among other possible positive health benefits. Don’t jump to any conclusions, though, as far more research is needed.

How Does Swerve Affect Absorption of Nutrients

Another question I sought answers to without success is how these pseudo-carbs like erythritol impact nutrient absorption of other foods.

I couldn’t find any studies on whether sugar alcohols improve or hinder nutrient absorption of the processed foods they are found in or meals they are paired with. I found this surprising, given their main claim to fame is how they are minimally absorbed by the body or if absorbed, often left undigested. Hopefully, someone will either come across good research on this subject or realize it’s importance.

How is Swerve Made and From What?

So, while it appears that erythritol is somewhat safe, don’t you wonder how factories produce it? That is where things get a bit dicey. First, it appears that food manufacturers use waste streams to create most sugar alcohols. Here’s the list of common raw materials which vary by manufacturer (5):

I am all for recycling, but a lot of this stuff is compost, not cuisine!

Second, what are the details of the factory process that makes Swerve once the raw materials are secured? Solid data on this aspect of sugar alcohols is lacking, but like a lot of industrial foods, it appears the devil is in the processing.

Erythritol is produced industrially beginning with enzymatic hydrolysis of the starch from corn to generate glucose. Glucose is then fermented with yeast or another fungus to produce erythritol. Other methods such as electrochemical synthesis are in development. Chemical and fermentative processes have been introduced for large-scale production of erythritol. Erythritol can be synthesized from dialdehyde starch by high-temperature chemical reaction in the presence of a nickel catalyst. This process has not been industrialized because of its low efficiency. Large-scale production of erythritol uses fermentative processes with pure glucose, sucrose, and glucose from chemically and enzymatically hydrolyzed wheat and corn starches. Erythritol can be produced by microbial methods that utilize osmophilic yeasts and some bacteria. (7)

The above information is concerning. Nickel catalysts used to manufacture erythritol? This heavy metal is carcinogenic and has zero benefits to human biology. Incidentally, another common source of potential nickel contamination is preparing acidic foods like bone broth or tomato sauces in stainless steel cookware or appliances like the Instapot.

Is any heavy metal residue left in the erythritol itself? Do any of the toxins from manufacturing processes make it into the final product? What about residual glyphosate or other agricultural chemicals and their metabolites when GMOs are used as raw materials? Unfortunately, little information exists on the purity of sugar alcohols.

These concerns are not fear mongering or far fetched. It is common for industrially produced foods to contain residual processing agents, sometimes heavy metals, sometimes hexane and other solvents and chemicals. Many foods and food additives, like soy or rice based food additives like brown rice syrup, have been studied in this regard. Unfortunately, the data is currently nonexistent on sugar alcohols.

Swerve to the Left or to the Right?

Generally the real food community seems okay with sugar alcohols. For example, it is featured heavily in the recipes and meal plans of diets like Trim Healthy Mama.

From a scientific viewpoint, they seem neutral to possibly beneficial. In my view there is insufficient research or information at the present time to conclude they are totally safe.

From a real food standpoint, though, these are pretty far from anything resembling real food! While they naturally occur in many vegetables and fruits, the amounts are incredibly small, and they get there by natural processes. Modern, industrial versions involve multi-step, massive industrial systems, sometimes taking inedible waste streams and through the magic of modern chemistry turning them into “food.” The risk of dangerous residues in the final product is very real though at the present time, unstudied.

In moderation or on occasion, I see no reason to be concerned currently. But if you find yourself eating foods every day enhanced with sugar alcohols or zero calorie sweeteners like stevia or monk fruit extract, then I would give pause. Are you possibly using convenient, tasty alcohol sugar enhanced processed foods at the expense of unprocessed nutrient dense foods?

If you are getting a lot of exposure to Swerve and erythritol in general, it is probably safe to say that you are on the wrong dietary track. Changes are likely in order to keep you and your family well nourished.

Swerve Away from SWERVE?

Let’s finish up with some final thoughts on Swerve. It appears that chicory is the source for the other oligosaccharides in Swerve. While this is not problematic, the “natural flavors” in Swerve are a big no-no. These ingredients are a mystery mix that can include all sorts of industrial additives that companies don’t have to disclose on labels. Manufacturers produce many of these using toxic processes and dangerous chemicals and solvents. (8)

So, while it seems safe to consume sugar alcohols on occasion (like Peelu chewing gum), when it comes to Swerve, it is best to stay away from a product where the manufacturer purposely does not disclose some of the ingredients, choosing instead to hide behind loose regulations for “natural flavors”.