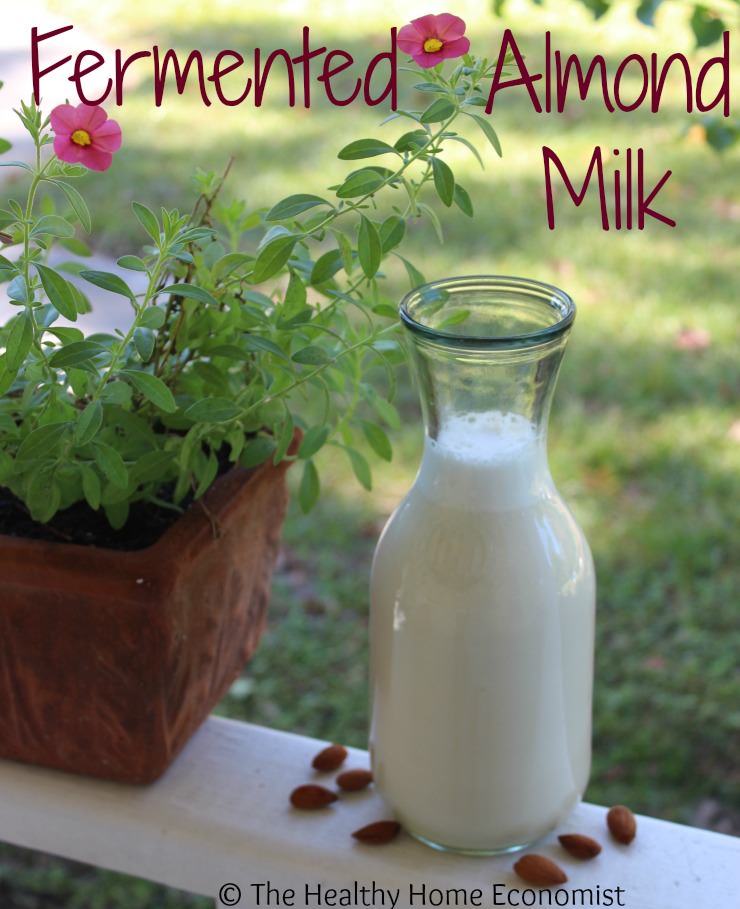 A healthy milk substitute such as homemade almond milk is an important drink to know how to make yourself in light of the skyrocketing cases of dairy allergies today.

Almond milk made at home can also be fermented to add probiotics and beneficial enzymes that enhance the digestive process and boost the immune system in much the same way as grassfed raw milk. While homemade almond milk is high quality, nutritious and digestible, industrialized versions at the store even if organic should be avoided. The reasons for this are threefold:

First, Vitamin A Palmitate is typically added, the synthetic version of Vitamin A. Synthetic vitamins are the chemical mirror images of the real, natural versions. They can cause imbalances over time. Even small amounts of the synthetic fat soluble vitamins like Vitamin A can prove toxic and should be strictly avoided.

The Organic Consumers Association warns that isolated vitamins such as those produced synthetically cannot be recognized or metabolized by the body in the same way as the natural version. On the other hand, large doses of natural vitamin A are well tolerated by the body as established by researchers decades ago. Traditional diets contain 10 times or more of the RDA of this nutrient with no ill effect. However, synthetic vitamin A is associated with birth defects and bone fractures. It has no benefit in the diet whatsoever.

The second dangerous synthetic vitamin that is commonly found in store bought almond milk is vitamin D2. Vitamin D2 is a form of the wonder vitamin that you should take great pains to avoid. It does NOT help resolve vitamin D deficiency!

In all known cases of Vitamin D toxicity where the dose was intentional, Vitamin D2 was the culprit. By comparison, Vitamin D3 is much less toxic and requires an enormous or even an accidental dose to produce any toxic effect. Synthetic Vitamin D2 as added to foodstuffs is manufactured industrially by irradiating yeast. It is dangerous for D2 to be added to any food product particularly if this product would be given to children, where toxicity symptoms would appear at much lower dosages.

A common additive to commercial almond milk, rice milk and other milk substitutes is carrageenan. Innocuous enough at first glance, carrageenan is derived from seaweed. Food manufacturers add it as a fat replacer and stabilizer to many lowfat and nondairy products. It is even allowed in organic almond milk!

Dr. Andrew Weil has been telling people to avoid carrageenan since 2002. Carrageenan is incredibly toxic and inflaming to the human digestive system. Think IBS, Crohn’s, ulcerative colitis, etc. As a result, the International Agency for Research on Cancer (part of the World Health Organization) classifies it as a potential human carcinogen.

The hype from the carrageenan industry claims that “food grade” carrageenan is different from the low molecular weight, i.e., degraded carrageenan that is toxic to human cells. This spin fails to mention that not a single sample of products containing carrageenan that were tested could be said to be free of the degraded form. Some samples contained as much as 25% low molecular weight carrageenan. This testing was conducted as part of a 2003 ruling by the European Commission’s Scientific Committee on Food. This judgment required that a processed food contain a maximum of 5% degraded carrageenan. Another problem is that research available since the early 1980′s indicated issues for food grade carrageenan too. Evidence suggests that it is probably converted during the digestive process to the degraded, highly toxic form.

More recent research sponsored by the National Institutes of Health (NIH), pinpointed the exact metabolic process by which carrageenan triggers inflammation.  Shockingly, this biological event was found to mirror the way pathogenic bacteria such as salmonella wreak havoc in the gut.

Consumer advocate Debra Lynn Dadd, author of Toxic Free, reveals the truth about aseptic packaging. Also called tetrapaks, they are made from paper (70%), polyethylene plastic (LDPE) (24%), and aluminum (6%). In addition, a tight food-grade polyethylene (plastic) layer lines the inside which touches the food.

The food that is packaged in these multi-layered tetrapaks is sterilized via a flash-heating process. The temperature reaches between 195° and 295°F. The FDA considers food grade polyethylene plastic to be one of the safest plastics to come in contact with food. Consequently, manufacturers promote to consumers that little to no leaching of toxic chemicals occurs. However, actual research suggests otherwise. In a study published in the Journal of Agricultural and Food Chemistry, researchers measured the presence of nonylphenol (NP), bisphenol A (BPA) and bisphenol A diglycidyl ether (BADGE) in two brands of milk packed in aseptic, tetrapak containers.

Note that one of the benefits of these containers within the industrialized food system is that they are designed to stack on pallets. After that they perch on store shelves for potentially weeks or months. This long storage time in possibly hot warehouses takes a toll. All samples contained measurable levels of endocrine disrupting substances that leached from the “nontoxic” plastic or lining of the containers.

The researchers noted that the levels of the endocrine disrupting compounds in the samples studied did not achieve “the maximum leached level allowed by law”. However, they concluded that “. . . the impact these compounds may have on organisms and human beings needs to be further studied”. This concern is of special importance with regard to “accumulation, degradation and possible effects within the endocrine system”.

It is best to make your own homemade almond milk?  I would say so if just to avoid the packaging concerns let alone issues with additives and synthetic vitamins!

Enjoy homemade almond milk chilled and served in a glass or try making this blueberry banana almond milk smoothie instead for a healthy breakfast on the go. 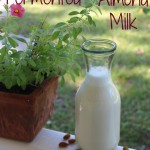 Recipe for homemade almond milk that is lightly fermented to add probiotics and additional nutrition.

Use almond milk starter culture if you wish to avoid using liquid whey.

Use sprouted almonds for an even more digestible and nutritious beverage.

Why Almond Milk from the Store Should Be Avoided

How to Make Coconut Milk