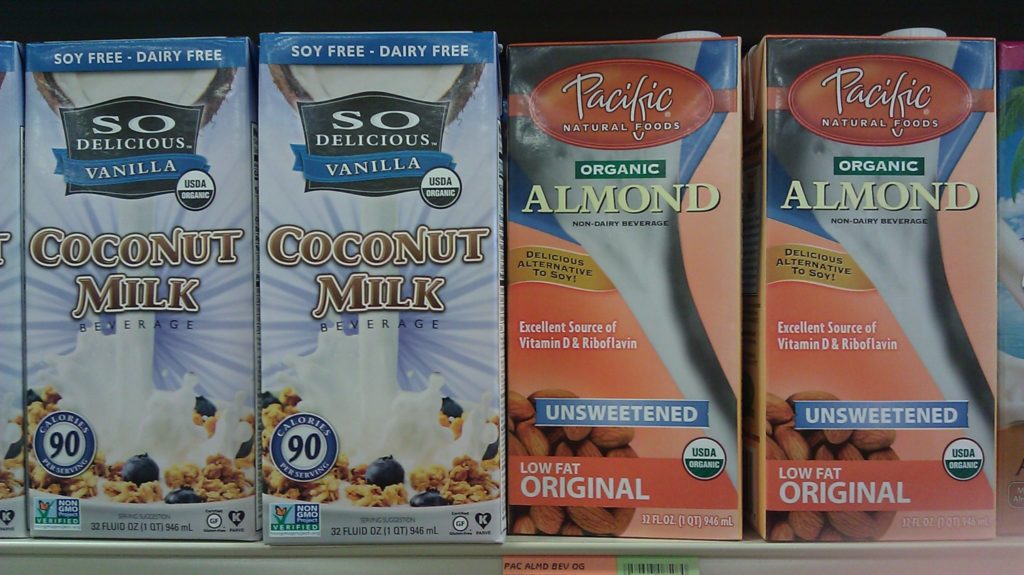 Organic coconut milk and almond milk are common purchases at the health food store by those with dairy allergies. Usually, these people are savvy consumers who know enough nutritionally to avoid soy milk with its endocrine disrupting isoflavones and gastric inflaming phytates. Rice milk is also steadily declining in popularity as it is really not much more than a glass of sugar water nutritionally speaking.

Organic, unsweetened coconut milk and almond milk in cartons seem like great alternatives at first blush, but are they really as “healthy” as people believe?

Let’s take a look at the labels.   I was shocked at what I found.

Check out the labels of the three brands I photographed.  I checked all the brands, by the way, and they all contained the same dangerous additives I’m about to describe. 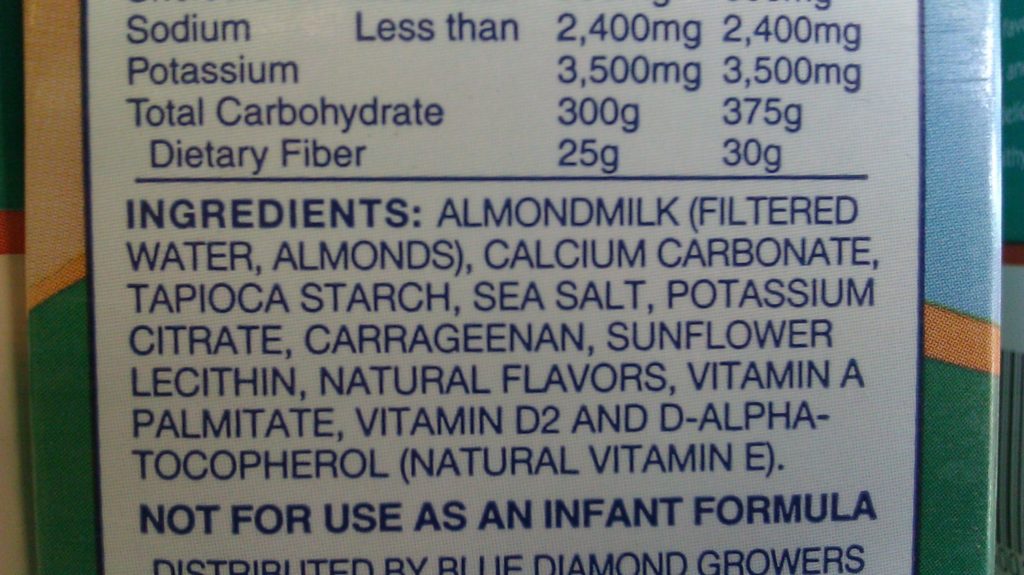 Synthetic vitamins are the chemical mirror images of the real, natural versions. They can cause imbalances over time. Even small amounts of the synthetic fat soluble vitamins like Vitamin A can prove toxic and should be strictly avoided!

The Organic Consumers Association warns that isolated vitamins such as those produced synthetically cannot be recognized or metabolized by the body in the same way as the natural version. 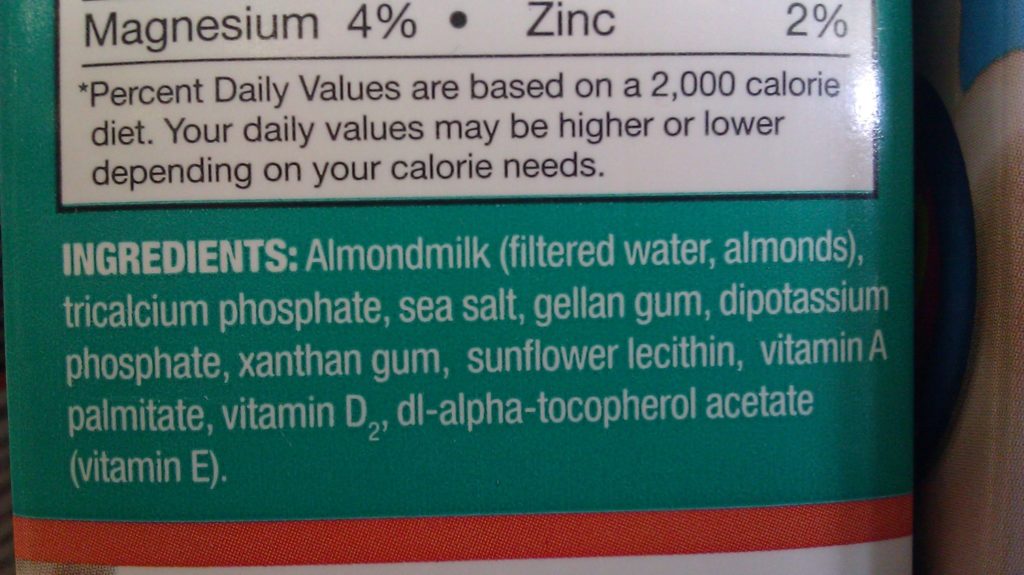 Large doses of natural vitamin A are well tolerated by the body as established by researchers decades ago, however.  Traditional diets contain 10 times or more of the RDA of this nutrient with no ill effect.  However, synthetic vitamin A is associated with birth defects and bone fractures.  It has no benefit in the diet whatsoever. 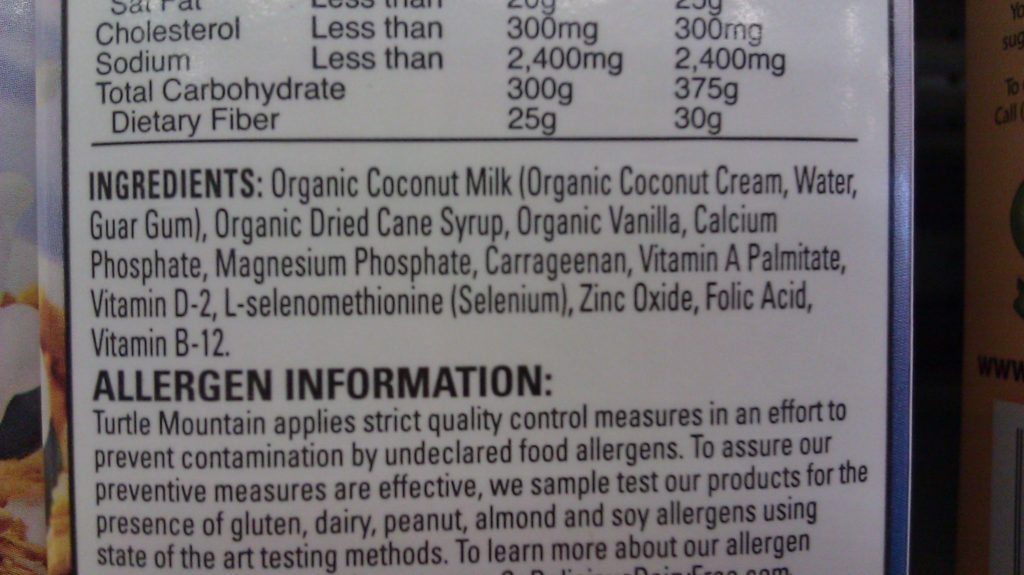 The second really bad additive in these organic cartons of coconut milk and almond milk is Vitamin D2.  Vitamin D2 is a form of the wonder vitamin that you should take great pains to avoid.

In all known cases of Vitamin D toxicity where the dose was intentional, Vitamin D2 was the culprit.  By comparison, Vitamin D3 is much less toxic and requires an enormous or even an accidental dose to produce any toxic effect.

Vitamin D2 is manufactured industrially by irradiating yeast.   It is dangerous for D2 to be added to any food product particularly if this product would be given to children, where toxicity symptoms would appear at much lower dosages.

None of the store brands of cartoned coconut milk or almond milk were free of these dangerous and synthetic versions of the fat soluble vitamins!

Notice also that carrageenan is present in 2 of the 3 products as well!  Dr. Andrew Weil has been telling people to avoid carrageenan since 2002.

Carrageenan is so toxic and inflaming to the human digestive system that this food additive is formally classified by the International Agency for Research on Cancer (part of the World Health Organization) as a potential human carcinogen.

In my view, it would be a mistake to purchase and consume these items.  They are in no way health promoting or beneficial, particularly for growing children!

Healthy Alternatives to Coconut Milk and Almond Milk in Cartons

Coconut milk and almond milk should be healthy and they can be if they are produced at home without these dangerous additives. I wrote an in depth post on how to easily make these nondairy beverages yourself. This recipe for wild rice milk is a good option as well.

Believe it or not, even organic coconut milk in BPA free cans would be a better alternative to cartons of coconut milk based on my label inspection!

Check out my video on homemade coconut milk and my article on how to make healthy DIY almond milk, fermented to add probiotics and enzymes to boost immunity and improve digestion.

From Seafood to Sunshine: A New Understanding of Vitamin D Safety

Vitamin A on Trial