Why Soy Formula (even organic) is So Dangerous for Babies 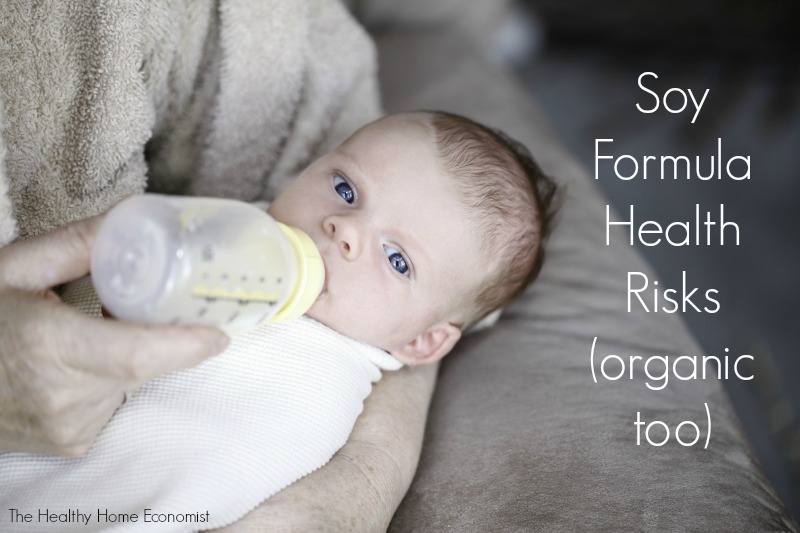 Today’s generation of children could aptly be called Generation A where the “A” stands for allergies. Food intolerances and of all kinds are rampant with the very first frequently becoming apparent when a formula-fed infant demonstrates an allergy to commercial milk-based formula. The typical recommendation by a conventional doctor in this case? Put baby on a soy formula such as Isomil or ProSobee immediately.

About 25% of American babies are fed soy infant formula according to the website of Dr. Sears.

Elemental infant formula might also be suggested, but these are usually reserved for preterm infants and those with specific medical problems such as severe allergies to both milk and soy. Elemental formulas also tend to be foul-tasting compared with milk or soy-based formula and babies tend to reject them for this reason.

Many parents make the switch to soy formula in haste hoping to ease the digestive discomfort their child is experiencing on commercial milk formulas not realizing the full implications of their decision.

In some cases, parents may never even try a dairy formula at all if a milk allergy already runs in the family. There is no evidence that using soy formula reduces the risk of a dairy allergy later, however.  For this reason, the Committee on Nutrition of the American Academy of Pediatrics recommends against the use of soy formula in infants who are potentially allergic to cow’s milk. A milk-based formula should still be the first choice even in those situations.

The Three Reasons Why Soy Formula is So Bad for Babies

These are proteins found in plentiful amounts in soybeans that inhibit digestion and absorption of nutrients. They are large in size and require the application of high heat for appreciable periods of time to neutralize.

The industrialized process of producing soy infant formula deactivates the majority of trypsin inhibitors. Unfortunately, some remain and even in low amounts, they have been found to prevent normal growth in rats. Given that a baby’s brain grows at its most rapid rate the first year of life, growing to about 75% percent of adult size (it is 25% of adult size at birth), even slight retardation of growth could be devastating to the development of the brain and nervous system.

Note that protease inhibitors in soy are also an issue, as they greatly hinder the digestion of protein. Potential harm to the pancreas is another grave risk.

Phytic acid is an organic acid, which like trypsin inhibitors, is present in large amounts in soybeans. Phytates are present in the outer portion of all seeds and block the absorption of critical minerals like calcium, magnesium, iron and particularly zinc. Phytic acid is also extremely irritating to the digestive tract.

Unlike other seeds, soybeans have extremely high amounts of a type of phytic acid. This anti-nutrient is particularly resistant to deactivation. Researchers testing soy formula in 1967 found that soy formula caused zinc deficiency in every single infant who received it. Again, this is due to the mineral blocking effect of phytates within the digestive system.

Zinc is known as the intelligence mineral because it is critical for the optimal development and functioning of the brain and nervous system. As a result, deficiency of this nutrient in infants at a time when the brain is growing at its most rapid rate could have lifelong implications and possibly reduce IQ.

Phytoestrogens represent the most serious problem with soy infant formula. These estrogen-like compounds have the potential to disrupt the baby’s hormonal system for life.

According to the Weston A. Price Foundation:

Toxicologists estimate that an infant exclusively fed soy formula receives the estrogenic equivalent of at least five birth control pills per day. By contrast, almost no phytoestrogens have been detected in dairy-based infant formula or in human milk, even when the mother consumes soy products. A recent study found that babies fed soy-based formula had 13,000 to 22,0000 times more isoflavones in their blood than babies fed milk-based formula.

Flooding of an infant boy’s bloodstream with female-like hormones has the potential to cause serious developmental problems at puberty.  During the first few months of life, a baby boy has testosterone levels that could be as high as that of an adult male. This “testosterone surge” readies the baby boy’s hormonal system for puberty both for normal development of the sexual organs and also patterns of male behavior.

Could soy infant formula be responsible for the increasing problem of boys where physical maturation is delayed or even completely absent with retarded development of the sexual organs?

Those girls identified as early soy-fed via soy infant formula had a 25%  increased risk of menarche specifically in early adolescence.

Early sexual development in girls can herald serious problems with the reproductive system later in life such as unexplained infertility and breast cancer.

Research from 2012 published in Biology of Reproduction’s Papers-in-Press describes the effects of plant estrogens found in soy on the mouse oviduct. The study was specifically designed to model the effects of soy-based baby formula on human infants. The results of the study suggest that exposure to estrogenic chemicals in the womb or during childhood has the potential to negatively affect a woman’s fertility as an adult.

Some parents mistakenly believe that genetically modified soy is the main problem and that buying organic soy formula is protective for their infant.

Nothing could be further from the truth. While organic soy formula does indeed provide a better quality source of soy, organic soy still has the same problems as GMO soy.  Trypsin and protease inhibitors, high levels of phytic acid, and large amounts of hormone-disrupting plant estrogens can devastate the baby’s digestive development and hormones potentially for life!

Parents wishing to provide the highest quality formula for their baby should breastfeeding not be an option should consider a homemade formula made from grass-fed raw cow milk.

If cow milk is a problem, goat milk formula can be tried instead. Goat milk has a slightly different fat composition and protein profile that is easier for some babies to digest. Please note that powdered goat milk is not recommended. The powdering process denatures the fragile proteins in goat milk. Powdered goat milk is not as nutritious as whole raw goat milk. Moreover, the chances are high that it will cause an allergenic response in the baby at some point.

If all dairy even if unprocessed and grass-fed is still problematic, a homemade nondairy formula based on homemade bone broth can be utilized instead.

Thousands of mothers have successfully used these homemade formulas with their babies in recent decades with excellent results!

One more point of note. When your child is ready to be weaned off homemade formula at one year old, skip the soymilk! Soy as a food or beverage is not any more appropriate for toddlers than it is for babies! If your child is allergic to raw milk from pastured animals (best choice), wean him/her onto a nutritious milk substitute instead.

Governors Team With Hallmark to Pressure Parents to Vaccinate

How the Varicella Vaccine Damages a Child’s Immunity (for Life!)