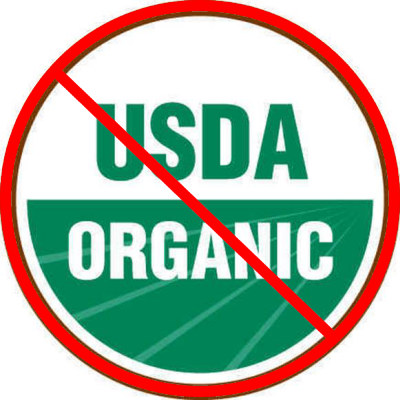 Why would the average consumer decide to switch to organic food? Typical reasons include food of higher quality that is hopefully more nutritious although conventional produce grown locally and picked at the peak of ripeness would no doubt rival the nutrition of organic produce picked early and shipped long distances. Consumers also generally assume that any food labeled as USDA Organic will not contain any dangerous ingredients or chemicals like carrageenan.

After all, buying certified organic food is still the only way to avoid genetically modified ingredients as GMOs are regularly slipped into healthfoods labeled as “natural” and even those containing organic ingredients but less than 70% organic overall.

Based on these assumptions, consumers would likely be surprised and even shocked to learn that a likely human carcinogen that triggers massive gastointestinal inflammation and symptoms in many people continues to be allowed by the National Organics Standards Board (NOSB) for inclusion on the list of ingredients permitted in certified organic food – food bearing the USDA Organic label!

This dangerous ingredient, carrageenan, which most consumers are unaware is lurking in so many of their beloved organic products, seems harmless enough at first glance.

Derived from seaweed, carrageenan is a highly processed food additive that has no nutritional function whatsoever.

What it does do is act as a fat replacer or stabilizer in certain types of dairy products, commercial dairy substitutes like soy milk, coconut milk, hemp seed milk, almond milk, and other processed foods.

As you can see, buying lowfat is not a good idea and not just for the fact that you are losing the valuable whole fats that satiate and steady the blood sugar.  By opting for lowfat or alternative dairy products, consumers are choosing instead to consume a toxic additive that is a likely carcinogen!

Even Dr. Andrew Weil has been telling people about carrageenan dangers since 2002.

Carrageenan is so toxic and inflaming to the human digestive system that this food additive is formally classified by the International Agency for Research on Cancer (part of the World Health Organization) as a potential human carcinogen.

Scientists first discovered that carrageenan causes gut inflammation as far back as the 1960’s.  Inflammation is a very serious condition as it is a primary symptom in IBS, Crohn’s Disease, ulcerative colitis, and colon cancer as well as dozens of other diseases.

The hype from the carrageenan industry claims that “food grade” carrageenan is different from the low molecular weight, i.e., degraded carrageenan that is toxic to human cells.

This spin fails to mention that not a single sample of products containing carrageenan that were tested could be said to be free of the degraded form. Some samples contained as much as 25% low molecular weight carrageenan. This testing was conducted as part of a 2003 ruling by the European Commission’s Scientific Committee on Food which required that a maximum of 5% degraded carrageenan be contained in a processed food which includes the additive.

Another problem is that research available since the early 1980’s indicated that even food grade carrageenan is probably converted during the digestive process to the degraded, highly toxic form.   More recent research sponsored by the National Institutes of Health (NIH), pinpointed the exact metabolic process by which carrageenan triggers inflammation.   Shockingly, this biological event was found to mirror the way pathogenic bacteria such as salmonella wreak havoc in the gut.

The takeaway for consumers from this very discouraging NOSB ruling is to not take anything for granted just because a product is labeled USDA Organic.  It still could be extremely damaging to your health!

Avoiding lowfat dairy and processed dairy substitutes is a very wise course of action. If you have a dairy allergy, learn to easily make healthy milk substitutes at home that are free of carrageenan dangers!

Be aware that most commercial pet food is loaded with carrageenan too. Check the labels to be sure your furry friends don’t suffer from its unhealthy effects as well.

The Cultivator, News from the Cornucopia Institute, Summer 2012

How the NO Word Preserves Your Health

All About Organ Meats (and why to eat them!)