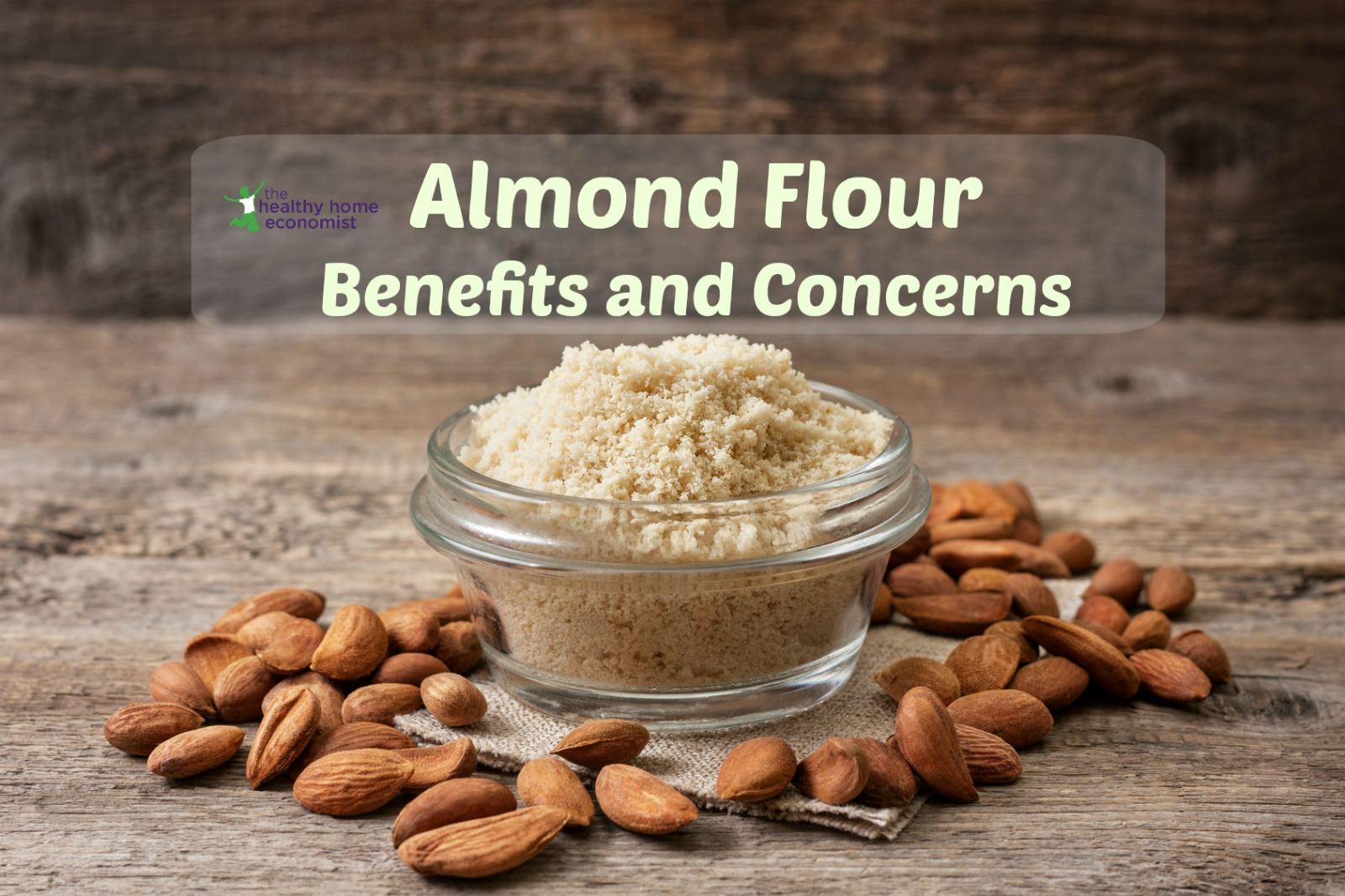 While humanity has enjoyed almonds for millennia, almond flour as a replacement for grains in baking is relatively new on the scene.

Its popularity is traced back to the early 2000s. During this period, awareness of Celiac, gluten intolerance, and digestive problems aggravated by wheat started to grow.

Gut healing diets became popular around the same time. The GAPS protocol, for example, recommends the avoidance of all grains temporarily to heal and seal the gut wall to resolve autoimmunity issues.

The grain-free primal and paleo diets became popular as well with sizable numbers of followers and growing worldwide awareness.

Popularization of Almond Flour for Baking

The trouble is, people who either wanted or needed to go grain-free in those early days had very, very few options for baking. In short order, almond flour and almond meal filled the void, soon taking primacy among paleo and gluten-free eaters.

By 2010, when gluten-free went gangbusters, almond flour took the top spot as the go-to alternative. Rice and to a lesser extent, coconut flour also rose in popularity. (1)

This continues today even with the plethora of grain-free options now available such as cassava, gram, arrowroot, banana flour, and others. Acorn is another substitute with the big advantage that it is very cheap to make as gathering these nuts to make flour is usually a cost-free foraging activity.

Popular doesn’t necessarily equate with healthy, however. In fact, much of the time, if a new food is popular, it is prudent to consider running the other way!

Does this contrarian approach suit almond flour, though? It is certainly well established and easily available now. But is it a good idea to consume? It is rather expensive if you buy it, and making homemade almond flour isn’t much cheaper.

Let’s examine whether such an expensive replacement for grain-based flour is nutritionally superior or problematic in any way.

Almonds and America have an interesting history. Almond trees are native to the Middle East, the Indian subcontinent, and parts of Africa. When they arrived in the United States, it wasn’t long before someone discovered that California’s climate was ideal for their cultivation.

Almond growing now takes up a million acres in California! Most people have no idea that almonds are America’s number one export crop, valued at over 5 billion dollars per year.

Shockingly, US production is estimated to account for 80% of the entire world’s almond supply! (2)

This intensive almond growing led to the infamous “raw almond rule”. It was approved after a salmonella outbreak traced back to raw almonds made major headlines. This rule requires that almonds cultivated in the United States, even if labeled raw, must be pasteurized with few exceptions. This is done sometimes via steam, but sometimes via chemicals. (3)

The USDA, at the request of the Almond Board of California, began requiring in 2007 that raw almonds be treated with a process generously described as “pasteurization.”  The rule mandates either the gassing of the raw nuts with a toxic fumigant (propylene oxide) or treatment with high-temperature steam-heat. (4)

Between the almond rule and California’s water woes, almonds are now a contentious issue among both the health-conscious and environmentally aware. The recent heavy rains in California for a time have allayed the latter, but what about the former? Are almonds a health food, even in concentrated, processed flour form?

If you eat anything gluten-free or make such things yourself, you are probably either using or consuming almond flour. So what should you know about it before embracing in your home?

Almonds are a traditional food, with an excellent overall nutritional profile. High in fats, almond oil is over 50% monounsaturated, the kind found in olive oil and avocado oil.

They are an excellent source of vitamin E, choline, copper, and many other minerals and nutrients. They are not just traditional but merit the label nutrient-dense.

Research led by the professor David Jenkins, research chair in nutrition and metabolism at the University of Toronto, suggests that almonds benefit the heart due to vitamin E, monounsaturated fats, fiber, and numerous antioxidant phytochemicals including phenols, flavonoids, proanthocyanidins, and phytosterols. This is just a partial list of the pluses of eating almonds.

Jenkins work is a follow-up to a large Harvard study that found eating nuts decreased mortality rates by 20 percent. It further builds on Jenkins’ own work from 10 years prior which suggests, in the American Heart Association’s journal Circulation, “Almonds used as snacks in the diets of hyperlipidemic subjects significantly reduce coronary heart disease risk factors.” (4)

It appears that an almond a day may keep the doctor away! But the keyword here is “may”.

Before you go replacing all your grain flours with almond, however, there are a few important things to consider.

Almonds are Very High in Calories

Almond flour from blanched almonds contains about 650 calories per cup. This is 50% or more calories per cup than many other flours, such as wheat. If you thought eating grain-based flours was fattening, you perhaps hadn’t considered a nut-based flour like almond.

Eating a serving of whole almonds is around 23 whole nuts. This is about a handful (1 ounce). Eating a serving of almond flour easily doubles this. It is common for almond-based grain free recipes to require 1 ½ cups of almond flour or more, tallying a whopping 135 nuts. This amount of nut flour may make as little as two to three servings. That is over 40 almonds in a single serving!

In short, eating even a few meals a week where almond flour is substituted for more traditional flours can add up calorie-wise quickly.

Types of Fat in Almonds

While almonds contain good monounsaturated fats, they also contain plenty of polyunsaturates (PUFAs) that trigger inflammation when they exceed a small percentage of fat calories consumed per day. This isn’t generally a problem for those who eat whole almonds in moderation as part of a traditional foods diet. But toss in a few almond flour or almond meal based baked goods and you quickly increase your PUFA intake to possibly problematic levels.

Another issue is that the PUFAs in almonds are almost entirely omega-6. Hence, anyone who consumes almonds, almond flour, or almond meal regularly needs to make sure they are getting adequate omega-3 fats for balance. Cod liver oil and small amounts of walnut oil included in salad dressing would fit the bill here.

Unlike whole almonds, whose PUFAs are relatively protected by the integrity of the nut and skin, processing into almond flour exposes these delicate, rancidity prone fats to both heat and air.

This leads to oxidation of the fats. Then, almond flour is exposed to further heating by the end-user – you and me during the baking process. This degrades the PUFAs even further. How much?

Well, that is a subject of strong debate. Only one study has really looked into this issue, but it was on flax and showed that only a small portion of the fats oxidized during cooking. (5)

While this study has answered the concerns of a few, I still have my doubts and questions. For instance, it appears that in flax, certain chemicals such as polyphenols protected the PUFAs from oxidation. But with almonds, most flours have the most skin-rich polyphenol part removed. Why are we to assume that almond flour will act the same as flax when they are such different foods and handled and processed in such different ways?

What I would like to see is a study that traces how much total oxidation different nut and seed-based flours and food products suffer over their entire life cycle, from harvest to final consumer. Until we see such research, I personally am leery of almond and other nut flours. Those already struggling to keep PUFA intake in balance and under control would be wise to be cautious as well.

The problem with almond meal is that the texture tends to be quite gritty. This is not desirable when a light, smooth feel on the tongue is the desired outcome of a baked good. On the positive side, the skin protects the PUFAs in almonds from oxidation. This combined with the extra nutrition from the skin makes almond meal nutritionally preferable for baking to almond flour.

Research suggests that almonds have prebiotic benefits for gut health, and this is at least partly due to the skins. (7) This is certainly very positive.

However, many almond products use blanched almonds with the skins removed, so eaters aren’t getting these protections and benefits. Instead, we are getting a fair amount of PUFAs along with a load of kidney stone inducing oxalates and phytic acid from unsoaked nuts, since few if any products are prepared to minimize this or any other anti-nutrients in the almonds.

With almonds in particular and nuts in general, it is very easy to overconsume. This is true when whole, but when they are turned into flours, it is hard to avoid. A good rule of thumb is no more than a handful of nuts per day whether eaten whole or ground into flour. The trouble is, when you apply this to almond flour baked goods, it’s about the size of a small muffin!

Similar to the problem with rice (many gluten-free people are getting far more rice than they realize), if you are eating whole almonds but also eating gluten-free foods that contain almond flour, it is quite easy to consume far more than is beneficial. Thus, if you use almond meal or flour for baking, best to choose other types of nuts for snacking.

Almond flour, especially organic, is quite expensive. Combine this with high consumer demand for almond products including almond milk and the cost climbs quickly. The expense, in my mind, is a good thing. Hopefully, it will naturally limit too much reliance on this healthy, but over-hyped and frequently over-consumed, health food.

As an occasional ingredient, I wouldn’t have any concerns. But many people go far beyond eating a handful of almonds as one part of a varied, traditional, nutrient-dense diet. For those people, I would suggest looking at reducing your reliance on almond flour and almond meal. Consider the many other options now readily available and eat as wide a variety as possible.

You will find a number of recipes using almond flour and almond meal on this site using soaked and/or sprouted almond flour (excellent brand for baking). Using properly prepared nuts, you can enjoy the grain-free benefits of almond flour on occasion without the downside. Here are 9 recipes to try!