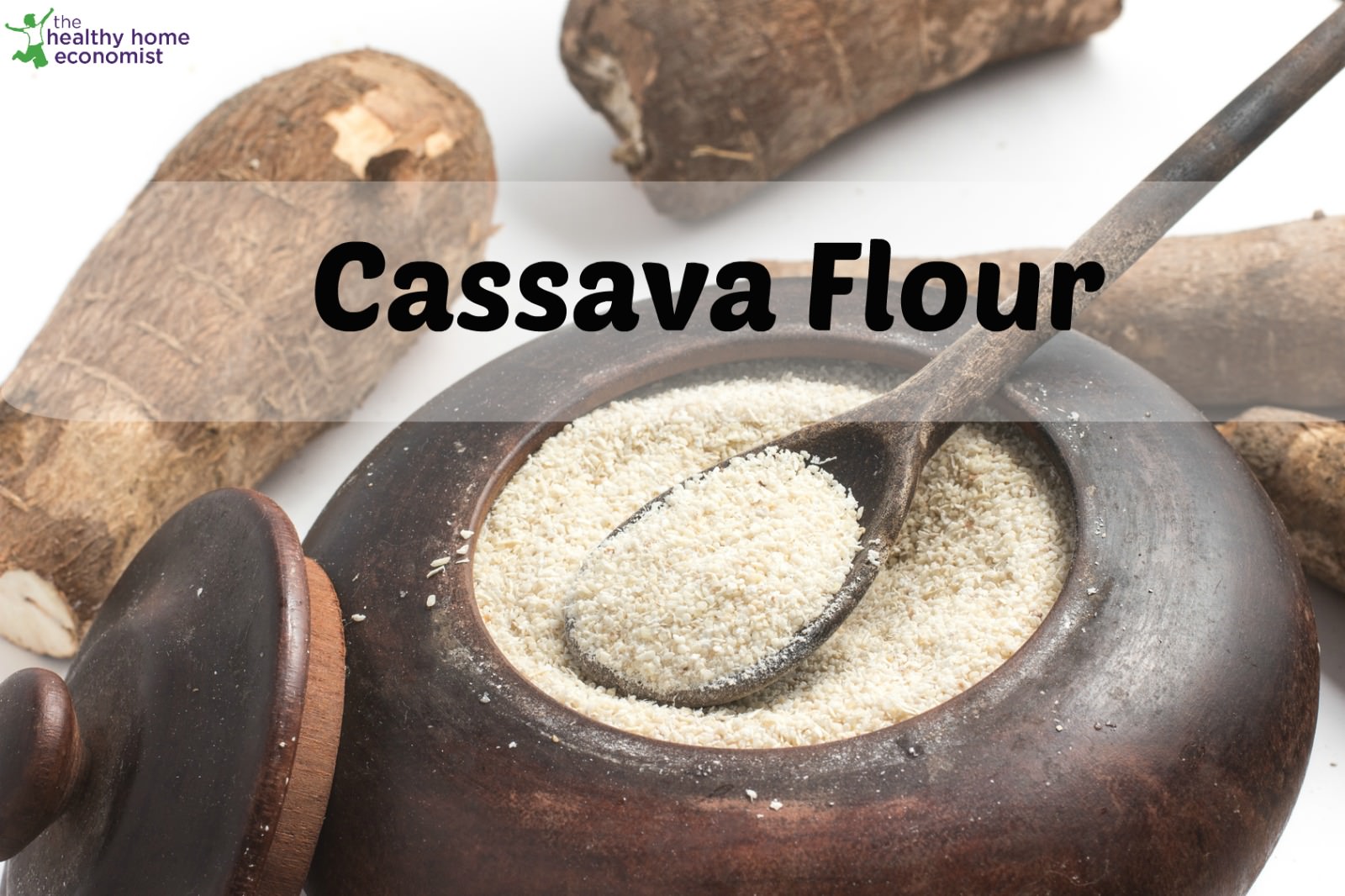 We recently added a new gluten free flour to our family’s menu – cassava. Soon after, I noticed that there is a bit of debate about it within the health community.

How debated is it? On one hand, in 2010, Time magazine listed it as one of the 10 most dangerous foods as identified by the American Academy of Pediatrics. (1)

A few years later, Time ran yet another article, this one praising the weight loss benefits of resistant starch found in foods like cassava! (2)

Then, I saw an article where chef and certified nutritionist Ariane Resnick said the following about this starchy root.

As a chef and nutritionist, I definitely don’t use cassava flour in my work. I like to encourage others to eat well, and this is not an example of eating well to me. I prefer other whole-food flours like coconut and almond flour, or garbanzo or brown rice flour for higher-carbohydrate, non-Paleo, gluten-free baking needs — all of these offer more nutrition than cassava flour. (3)

Cassava Compared with other Paleo Flours

The problem is, all the other alternative flours listed by Chef Resnick contain large amounts of anti-nutrients. Coconut flour has other issues/problems. Here’s the rundown:

In addition, none of the above flours have neutral flavor and texture profiles. So while cassava may not be super nutritious, the benefits of some of these others flours are overstated or the dangers and problems ignored.

Further, numerous other food and health authors praise and use it, or mention no real issues with it.

So let’s take a more in-depth look at cassava and try and sort out what makes the most sense about it.

Cassava: Traditional, Nutritious, and Not So Dangerous After All

Around the world, cassava goes by a number of names including yuca (unrelated to yucca), manioc, and Brazilian arrowroot. The large, starchy edible roots of this woody shrub native to South America serve as the third largest source of carbohydrates after rice and maize in the tropics.

Cassava flour is made from the tuberous root. Most Americans are already familiar with the slightly more processed form of cassava starch – tapioca. But much of the world is familiar with its root, starch and flour form. In fact, almost a billion people consume and depend on yuca as a dietary staple! Consumption of yuca goes back many thousands of years, and some ninety countries depend on it as a foodstuff. (3)

How Cassava (Manioc) Flour is Made

Cassava or manioc flour is made through a number of simple processes. It all starts with removing the roots from the ground and cleaning them thoroughly. Then, the roots are either soaked or fermented to remove anti-nutrients. Sounds very traditional, doesn’t it?

If the roots are fermented first, they are subsequently peeled (further removing certain problematic compounds), dried, and finally milled into flour.

If not fermented, the roots are peeled and ground into flour first. After that, flour is soaked in water, squeezed dry several times, and toasted to remove the problematic compounds. Other approaches to producing the flour are used, but they are similar to the ones given above.

11 Benefits from Baking with Cassava Flour

Here is a roundup of the benefits of using either plain or toasted cassava flour for baking. While not particularly nutritious, it has plenty of advantages over other grain free flours.

There are a few concerns with cassava. First, while it is true cassava contains naturally occurring cyanide compounds (many other foods do as well, such as almonds and spinach), there are removed during processing and deactivated by cooking. As long as you are getting your flour from a reputable source, I don’t find this concern compelling. It does contain some other anti-nutrients, especially goitrogens like millet, but these also appear to be significantly reduced from root to flour by proper processing. (4)

Good producers ferment or otherwise process the yuca roots to break down and remove the anti-nutrients that they contain. Once fermented, the root is peeled, dried, and ground to produce the flour. Also note, most of the cyanide occurs in the peel, which is removed during processing and discarded. (5)

Cassava has the potential to cause an insulin spike in some individuals. This is especially true if prepared without added protein or fats, or as part of meals that are low in protein and fat. While its glycemic index is moderate at 46, it packs a lot of calories and carbs per 100 gram serving. (6)

I also don’t find the second issue overly concerning, especially for Americans who tend to have access to ample fat and protein in their diets. Most recipes that use cassava include a fair amount of fat and protein (such as cassava waffles or pancakes), and are eaten as part of a larger meal, especially since a lot of people pushing cassava are Paleo, who tend to have little fear of meat or fat.

It is important to note that those with latex allergies should avoid all forms of manioc. This is due to issues with cross reactivity such as gluten and coffee.

Conversely, the very small number of people who are sensitive to the cassava plant itself are more likely to have a latex allergy too. (7)

The one fair criticism of cassava is that it is relatively low in nutrients. While calorie dense, it is not nutrient dense. Cassava flour is low in both vitamins and minerals, having a modest amount of vitamin C, but only small amounts of every other major nutrient. Neither vitamins nor minerals are found in abundance in this food.

Thus, cassava is an excellent flour (especially for gluten free people) to use in moderation as part of a nutrient dense diet. Cassava waffles blended with ghee and pastured eggs are exceptionally nourishing. Topped with even more ghee and a drizzle of maple syrup to boot and accompanied by pastured pork sausage or bacon make it a nutrient dense meal.

But a diet built around cassava starch would lead to all sorts of deficiencies. It is helpful to note that while cassava scores low on nutrients, this is true of most starches and starchy foods. (8)

When It Comes to Cassava, Quality Matters

One other reason for negative reviews of this tuberous plant may have to do with its growing popularity. Like with any food, not all sources are produced, handled, and distributed equally well.

Any food that is experiencing a lot of interest and growth inevitably ends up with a few companies that don’t do a good job with the processing and handling. This can result in bad experiences for consumers that has nothing to do with the food itself. So make sure that you get your preferred form of cassava starch from a good, reputable source, such as Otto’s Naturals.

Our family enjoys having cassava as another gluten free option, especially for making waffles and pancakes. It makes for excellent cookies, brownies, and more too. Bonus: using cassava flour for baking doesn’t require soaking or fermentation first. As mentioned above, processing removes the anti-nutrients. This makes it a highly convenient choice as well.

While it isn’t a staple on our menu, we do consume it three to four times a month, generally as a side or dessert. We all thoroughly enjoy the two days in a row we have pancakes or waffles made from this traditional food. It is always married to nutrient dense partners like ghee, butter, eggs, and maple syrup! Interestingly, cassava syrup isn’t such a great choice pared with baked goods made with the flour unless fructose malabsorption issues are present.

In sum, I see no reason not to enjoy it in moderation. For those looking for an affordable, gluten, grain, and nut free flour, cassava may be just the thing to bring some of your baking back to tip top form.