Using Nutritious Arrowroot in Your Kitchen and Home 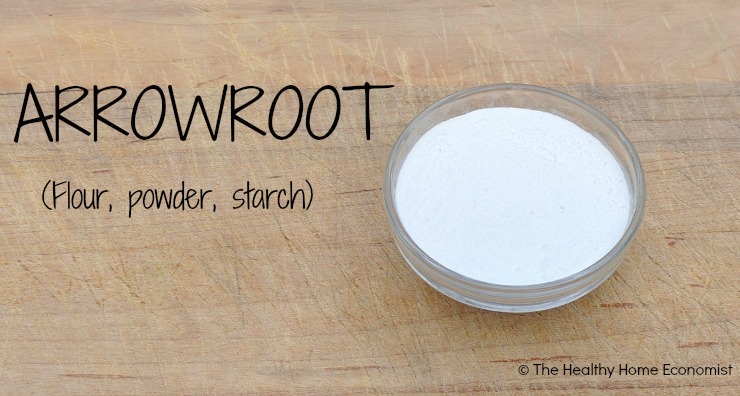 In recent years, food manufactures have released numerous alternatives to grain based flours and thickeners, particularly those made with wheat or GMO corn. Once expensive and hard to find, consumers can now easily source dozens of gluten free flours. Of the numerous choices available, arrowroot powder is among the most popular due to its versatility and impressive nutritional profile.

The Origins of Arrowroot

It seems hard to believe in this day and age of hybridized and genetically modified foods that arrowroot is actually relatively unchanged from its genetic origins about six thousand years ago similar to einkorn. Over that period of time, traditional peoples from many parts of the world consumed this highly prized, nutrient rich starch. Few foods can match the historical “roots” of arrowroot flour!

This starchy tuber similar to cassava root is classified with the Marantaceae family of plants. Native peoples from the Caribbean, South America and the Philippines cultivated it for thousands of years. Above ground, the arrowroot plant produces a dense foliage which makes an excellent animal feed (1).

This valuable starch, considered one of Mother Nature’s finest carbohydrates, gained the attention of the West in the early 1900s. This occurred from greater export importance for the island of Saint Vincent, especially as the sugar industry collapsed. Today, Saint Vincent produces only a fraction of the arrowroot it once did. Cheaper alternatives such as cornstarch replaced this more nutritious tuber.

With consumers increasingly seeking alternatives to GMO corn compounded by a rapid rise in wheat and corn allergies, however, arrowroot is making a strong comeback of late.

One of the beauties of arrowroot is found in its cultivation. Small farms still primarily grow it using traditional, often organic methods even if not so certified. The arrowroot plant is a perfect fit for such farming. It is exceptionally hardy and easy to grow, especially on windswept slopes of Saint Vincent island where it began its journey into the modern world.

The tubers themselves require proper handling before consumption. The extraction process, like the plant’s cultivation, highlight the food’s highly natural bent.

Thus, this traditional food comes straight to us uncontaminated by so many modern agrochemicals such as gut destroying glyphosate.

Besides the benefits of being a nontoxic food, it offers much nutritional value as discussed below.

Compared to wheat and corn based thickeners, arrowroot is the clear winner nutritionally. Like many rhizome root tubers, it packs a nutritional punch. It is high across the B-vitamin complex, including folate (not to be confused with synthetic folic acid) and a number of minerals, such as potassium. Arrowroot powder is also slightly superior to tapioca in terms of overall nutrition, but soil and growing conditions probably matter more than the plant species in this regards (2).

While arrowroot is very nutrient rich, it is low in protein. The protein profile is also incomplete with several important amino acids missing.

The starch portion of arrowroot is exceptionally easy to digest and completely gluten free. This makes it ideal as a common food for babies and small children. The sick and elderly find it easy on the digestion as well, which is one reason it was so highly valued by cultures who came to rely on it as a primary food source.

Arrowroot Flour and the GAPS Diet or SCD

Despite arrowroot flour’s ease of digestion, gut healing protocols such as the GAPS Diet, Specific Carbohydrate Diet and Autoimmune Paleo do not allow it. This is due to the high starch content. Those with an imbalanced gut tend to have trouble fully digesting starch molecules. Hundreds of monosugars connected in long branchlike strands comprise each one. Undigested starch molecules serve as the perfect food for pathogenic yeasts, bacteria, fungi and other pathogens to thrive upon compounding the problem.

However, once a person’s gut is healed, arrowroot is a perfect choice as one of the very first starches to reintroduce!

Is Arrowroot a Resistant Starch?

Arrowroot contains low levels of resistant starch, a type of carbohydrate that resists digestion and is turned into energy boosting, inflammation reducing, short-chain fatty acids by beneficial intestinal bacteria. Instead, arrowroot is like most starches in that it is easily absorbed by the small intestine as glucose.

Arrowroot is especially popular because its thickening power is TWICE that of most flours. It is also gluten free and thus widely used in the growing range of gluten free and grain free Paleo foods.

Arrowroot is both a gluten and grain free option and substitutes for corn starch at a 2:3 ratio. Two teaspoons of arrowroot powder replaces one tablespoon (3 teaspoons) of corn starch.

For wheat flour, the substitution is a 1:3 ratio. A single teaspoon of arrowroot powder replaces an entire tablespoon of wheat flour.

Arrowroot is a strong cooking binder

Arrowroot is superior to cornstarch or grain based flours in most cooking applications. It is a stronger binder, which means acidic ingredients do not weaken it. In addition, it will not discolor your dishes like other thickeners might.

It also does its magic at a lower temperature as well as having a more neutral taste. For frozen foods, arrowroot is once again the clear winner. It endures freezing and reheating far better than other options including tapioca.

Where Not to Use Arrowroot Powder

One place it does not work well is with dairy, where it creates a thick slime. The one exception is homemade ice cream, where it prevents the formation of ice crystals. Unfortunately, commercial ice cream manufacturers opt instead for cheap propylene glycol, or edible antifreeze.

Arrowroot flour is not ideal for baking pies or similar creations exposed to prolonged high heat. In such situations, tapioca (cassava) or banana flour are better as a thickening substitute for grain flour or cornstarch.

Arrowroot, like a number of thickeners, requires careful use, as overheating will cause it to breakdown. This results in a loss of thickening power. To avoid this problem, mix it first with a cooler liquid (such as a set aside portion of a soup or stew), then add to the larger mixture after removing from the heat.

The strong binding nature of arrowroot means it is useful in more than just the kitchen.

Arrowroot isn’t just a food, but has many other traditional uses too. Ancestral cultures used it to treat poisonous bites and wounds. This is due to it ability to rapidly absorb substances and toxins of an undesirable nature. More modern uses include problems like athlete’s foot or other conditions caused by excess moisture.

Arrowroot is ideal for homemade personal care items such as natural deodorants or bath bombs. It is a great addition to cosmetics because of its nourishing and beneficial qualities. It also helps improve absorption of lotions and creams. Given the growing concern over the dangers of talc, arrowroot based formulations especially for babies are a safe alternative.

The popularity of this tuber continues to soar given all of these practical uses. So where do we get this nutrient rich, versatile, traditional food?

Sourcing and Storage of Arrowroot Starch

In the past, manufacturers have been known to adulterate arrowroot flour with cheaper lookalikes such as potato starch. This is a similar pattern to other foods. For example, store bought honey is frequently adulterated with high fructose corn syrup.

Olive oil, organic or not, is usually “blended” with low quality oils such as canola or other cheap vegetable oils and sold as pure olive oil.

This risk is still very real! The danger of buying fake arrowroot flour will continue given that most consumers remain uneducated about food manufacturer tricks of the trade!

Like with so many foods and products today, make sure to purchase arrowroot flour from a reputable source. This ensures that you are getting true, genuine, 100% arrowroot powder, not some blend or imitation product. Since farmers generally cultivate arrowroot with little to no agrichemicals, it is not necessary to pay a premium for organically certified in most cases.

How to Know Your Arrowroot Starch is Real

Thankfully, it is easy to know if you are getting the real thing. True arrowroot starch is a fine, light, odorless white powder. See the picture above for a visual.

To test, whisk together 1/4 cup arrowroot starch with 1/4 cup room temperature water. Add to 2 cups boiling water and blend well. Once cooled, the mixture should form an arrowroot jelly that is perfectly smooth in consistency.

If not, the arrowroot flour is not authentic or has lost its potency and needs to be replaced.

It is extremely important to store arrowroot powder in a cool, dry, dark place in an airtight container. If it comes a bag, reseal in a second, larger airtight bag (like a ziplock). Alternatively, enclose it in a container with a tight fitting lid. This serves the dual purpose of keeping the arrowroot starch fresh and keeping pantry bugs out. These critters seem to love the stuff!

If you live in a humid environment, it is best to store in the refrigerator. Old arrowroot starch sometimes fails to thicken properly after a few months stored in the pantry. If stored unrefrigerated in a dry, dark, cool pantry, arrowroot will retain its thickening potency for about two years.

Do you have any other uses for arrowroot? Arts and crafts? Homemade cosmetics? Share them below!