How to Go Green with Banana Flour 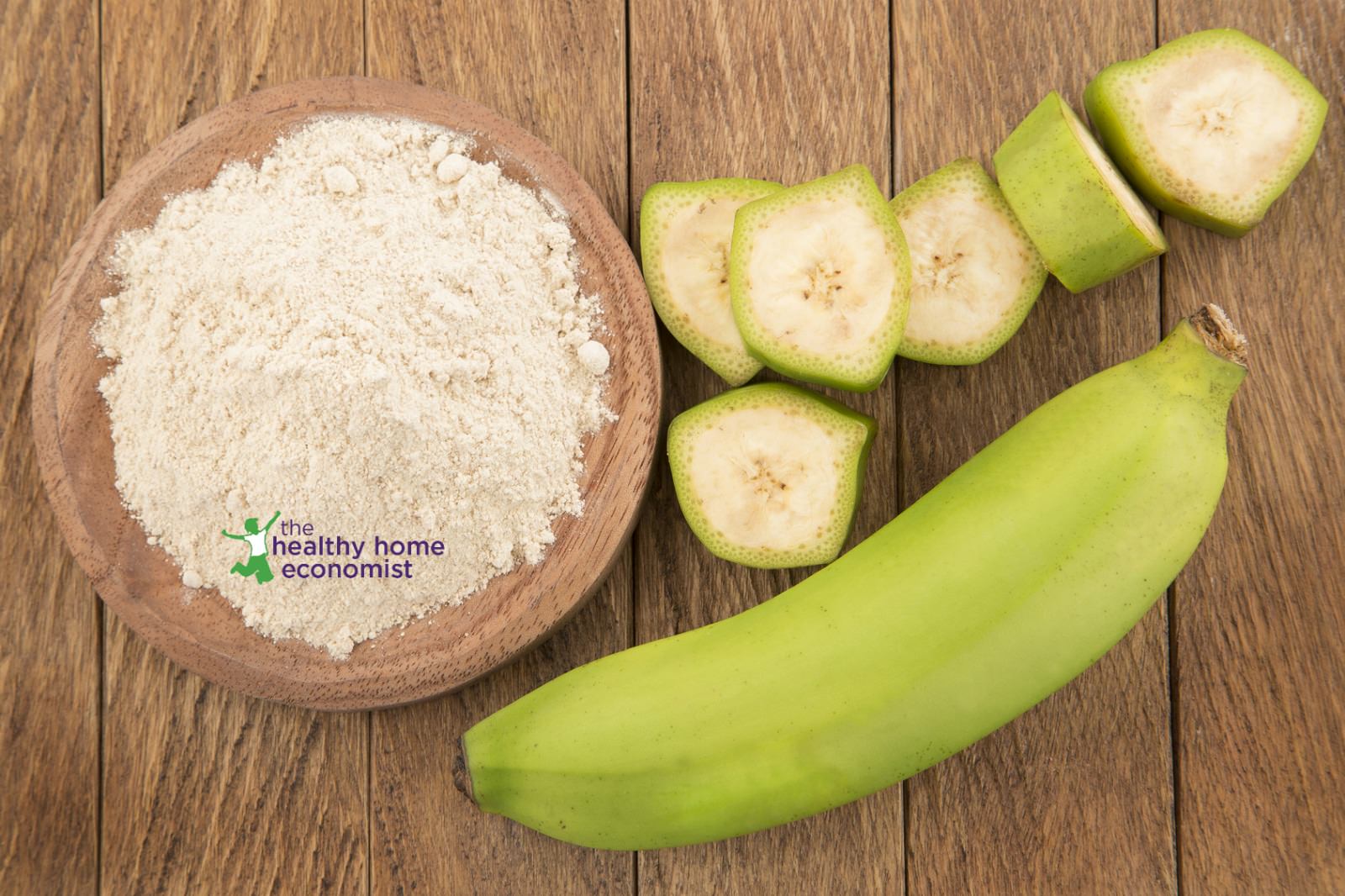 It seems there is an endless array of gluten-free grains and paleo flours now flooding the market. This isn’t a bad thing, but it can be bewildering for consumers. One that is really catching on comes from the most popular fruit in North America. Yes, that’s right, banana flour!

Let’s take at a look at this traditional food turned flour.

How is Banana Flour Made?

Banana flour is pretty appealing from a processing standpoint, comprising minimal steps which require little to no use of chemicals.

It is “made by simply gathering unripe green bananas before the sugar content has fully developed, followed by peeling, slicing, drying, grinding, packaging.” (1)

Thus, banana flour generally contains no additives, preservatives, or really anything else, save bananas. The big thing to note is that banana flour is generally made from green bananas, not ripe ones. But who, when, and why did people think of doing this to delicious bananas?

Did Ancestral Cultures Use Flour from Bananas?

While traditional cultures did not appear to use banana flour, that probably isn’t a problem. The discovery of drying and grinding bananas into flour came about in the late 1900s, especially in Jamaica and Africa. People used it and the very similar plantain flour as an alternative to higher-priced wheat flours.

Unlike ripe bananas which are soft and very sweet, green bananas are firm and low in sugar and flavor. When used in cooking, they retain little to no banana taste.

Does this make it bad or problematic? Not especially, since bananas themselves go back hundreds upon hundreds of years.

Though some food philosophies demonize starch, the truth is that not all starches are the same. Most are broken down long before they reach the large intestine. Not so with resistant starch, also referred to simply as RS. It escapes the small intestine and makes its way to the large, where it feeds the gut flora in highly beneficial ways.

Gut Bacteria Thrive on It!

For starters, resistant starch increases the population of beneficial microorganisms in the lower digestive tract or bowel. Specifically, it helps encourage the butyrate-producing bacteria. Butyrate has many benefits, including possibly protecting us from colon cancer.  (2)

One research paper sums up the benefits of resistant starch in unripe bananas this way:

RS II breaks down into short chain fatty acids & raise the pH level of large intestine which creates adverse conditions for pathogenic bacteria while favour the growth of beneficial bacteria. Butyrate, one of the short fatty acids inhibits the development of malignant cells which can become cancerous. It increases faecal bulking which promotes colon health and also acts as a rehydrating agent for those suffering from diarrhoea. It helps in slow digestion of blood glucose and insulin level.

Low insulin level triggers the use of body fat and helps in prevention of type II diabetes and manages obesity. It binds bile acids, cholesterol in digestive system and prevents their absorption from blood stream. Apart from these it also helps in prevention of osteoporosis by increasing the absorption of calcium and other minerals including magnesium iron etc. It also serves as a carrier of probiotics to the large intestine where they can maximize their benefits which include boosting the immune system. (4)

This is a long list of benefits from a little banana!

Where did all the RS go?

The modern, Standard American Diet (SAD) contains very little resistant starch, mostly found in potatoes. The RS in potatoes and other foods breaks down rapidly at temperatures of 160 degrees or higher, however. So don’t sit down with a bag of organic potato chips and think you are getting your RDA of RS during a relaxing evening on the couch! (5)

Since potatoes are problematic and even dangerous to consume raw, green banana flour with its resistant starch may become the go-to option for those wanting to see if it helps improve their health.

The resistant starch in cooked banana flour appears to resist breakdown slightly better than the resistant starch in potatoes, but more research is needed. Both in potatoes and green bananas, after cooking, the starches begin a process of turning back into RS. Unfortunately, only a small portion of the original will complete this process. Since you can consume it raw, this gives banana flour a distinct edge over many other RS sources.

Banana flour is lower in calories than most other flours per cup. At the same time, it packs an immense amount of potassium per serving, along with some iron, calcium, vitamin A, and vitamin C. (7)

The high potassium content makes adding banana flour to homemade electrolyte drinks a smart way to get both potassium and RS at the same time. This could be an easier remedy for those who experience leg cramps from low potassium status than eating unripe bananas, which some people find unappealing.

However, beyond the resistant starch and potassium, there isn’t much about banana flour that makes it noteworthy nutritionally.

Worth it to Go Organic?

While bananas generally don’t make the dirty dozen or other similar lists, I still will only consume organic ones. While bananas have a skin that is generally discarded, studies have shown that the highly toxic chemicals used on plantations – and that are known to injure workers – make their way into the fruit inside. (8)

Also, if you make compost, or use the banana peels to fertilize your flowers or garden, do you really want those chemicals and their residues spread to the rest of your food?

Another concern is the coming of GMO bananas. Yes, the frankenbanana is on the horizon and currently undergoing tests. You can be sure that when it hits the market, it won’t be labeled just like it’s other genetically modified cousins, primarily soy, corn, beet sugar, and canola.

Green banana flour may help alleviate some environmental issues inherent in banana production. Many unripe bananas are culled and discarded currently. Instead, with the growing market for green banana flour in developed nations, producers could turn this into a new, profitable product while reducing waste.

This is similar to what occurred with the development of avocado oil.

Banana flour is also replacing lower quality ingredients in animal feeds. For instance, it serves as a valuable addition to milk replacer for calves. (9)

How to Best Use Green Banana Flour

Banana flour has many uses. It gives yet another gluten-free flour for thickening sauces, stews, gravies, puddings, and other similar foods. In dishes that use wheat flour, the substitution rate is generally ¾ cup banana flour for each 1 cup of wheat flour. (10)

Because it is so new, there are limited recipes available that substitute banana flour in more traditional recipes. You will find many online, but only time will help sort the good from the bad! In good news, banana flour generally has a very mild flavor that often goes away during cooking. It won’t drive you or those eating your food bananas!

This recipe for green banana flour muffins is an easy one to try. You can also use banana starch in this recipe for plantain waffles and this one for grain-free biscuits.

If you wish to try adding some green banana flour to your smoothies or juices, it is best to start slow as the beneficial effects on the gut can trigger a detox reaction at first. Gas and bloating are common.

Start with a small amount like a half teaspoon or so to avoid this unpleasantness and work up from there to 1-3 tablespoons per day. This amount adds approximately 10-30 grams of resistant starch to the diet, which is the level studies show is most beneficial for weight loss, insulin control, and other health improvements. (11)

A few banana flours are now available in the US. Some grocery stores even carry them. If you can’t source locally, you’ll reliably find them offered by online retailers.

How does it compare in price to other non-gluten flours? You can find it for around $10/pound for organic options. This is a good brand to try that is widely available at health food stores.

Alternatively, you can make your own homemade banana flour quite easily with a bunch of green bananas. Per pound, this is a much less expensive option. The linked article provides a detailed recipe.