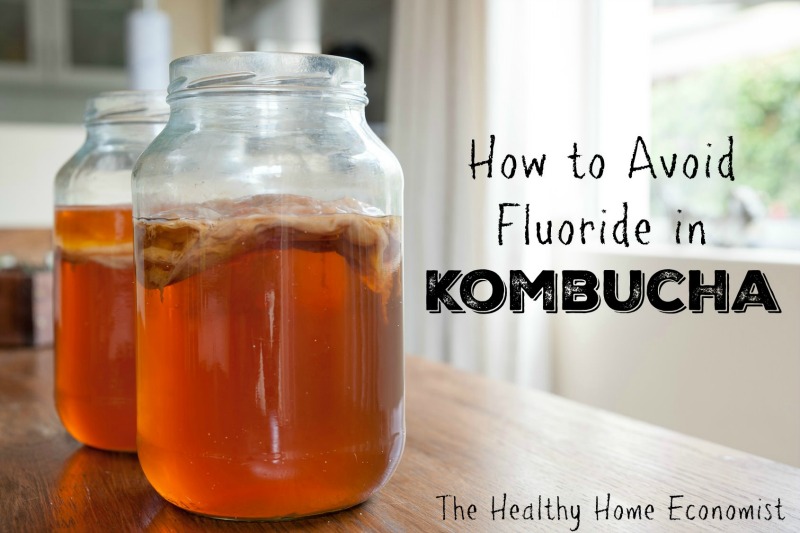 Does homemade kombucha contain too much fluoride to risk drinking it? How about commercial brands? Will they eat away at the enamel on your teeth and cause dental issues over time?

Given the devastating health effects that fluoride can wreak, particularly on growing children, it is certainly right to be troubled about the potential for high fluoride levels in kombucha, a traditional Russian drink made from fermenting plain black tea (or a combination of black and green tea) and sugar.

The Fluoride Action Network lists black and green tea consumption as the sixth top reason for fluoride overexposure. Consumption of fluoridated water is #1. The reason is that the leaves of the tea plant tend to accumulate high levels of fluoride which they take up from the soil.  Excessive intake of tea, particularly bottled or instant tea, has been known to cause a painful bone disease called skeletal fluorosis.

I am no stranger to the devastation of skeletal fluorosis. The picture above is of a cow crippled by fluorosis in Polk County, Florida just a few miles from where I live.

The cause of widespread fluorosis in cattle in Central Florida in decades past resulted from the creation of phosphate plants in the 1940s.

Raw phosphate contains high concentrations of fluoride estimated between 20,000 and 40,000 parts per million or 2-4% of the ore.

When raw phosphate ore is processed into water-soluble phosphate via a chemical reaction with sulfuric acid, large amounts of fluoride are vaporized into the air which can contaminate surrounding land with toxic fluoride in the form of hydrogen fluoride and silicon tetrafluoride.

As a result of the land contamination from the phosphate industry, the cattle population of Polk County, Florida dropped by 30,000 between 1953 and 1960. Farmers fearing for the health of their herds caused an estimated 150,000 acres of cattle land to be abandoned.

According to the former President of the Polk County Cattlemen’s Association:

“Around 1953 we noticed a change in our cattle… We watched our cattle become gaunt and starved, their legs became deformed; they lost their teeth. Reproduction fell off and when a cow did have a calf, it was also affected by this malady or was a stillborn.”

With one of phosphate’s primary uses being the production of commercial fertilizers, the possibility of fluoride residues being absorbed by commercial tea crops being repeatedly treated with phosphate-based fertilizers is a very real concern. It is already known that dairy cattle can suffer the effects of severe fluorosis simply through the use of mineral supplements made using mined phosphate.

In addition, commercial crops are treated with an array of pesticides and herbicides, 150 of which include fluoride according to the Organic Consumers Association.  The category “Fluorine Insecticides” includes Cryolite, Barium hexafluorosilicate, Sodium hexafluorosilicate, Sodium fluoride, and Sulfluramid and the herbicides Trifluralin, Fluometuron and Benefin (Befluralin) (EPA, Aug 97).

What about organic tea?

While studies on fluoride levels in organic tea are sparse, the results are very encouraging.  In tests performed on organic tea by the Weston A. Price Foundation, levels of fluoride in organic tea were found to be very low compared with commercial tea and even lower in kombucha brewed with organic tea.

According to the USDA, commercial black tea was found to contain fluoride at levels of 3.37 parts per million (ppm) in 2005.

Tests on organic tea made with filtered water by the Weston A. Price Foundation found fluoride levels nearly 75% lower at .94 ppm and even lower in kombucha brewed with organic tea (.9 ppm). The testing was performed by Soil Control Lab, Watsonville, CA.

These results suggest that fermentation of the sugar tea water into kombucha may potentially remove some of the fluoride from the tea perhaps via absorption from the kombucha culture itself.

How Does Kombucha Compare with Fluoridated Water?

Probably article statement from Orawellness generated the most concern:

One 16 ounce serving of kombucha can contain as much fluoride as 6 gallons of fluoridated water.

I’m comfortable challenging this conclusion in that the article only addressed the worst of all possible scenarios and did not include available data on organic tea. I’d like to provide some balance by providing you with a simple layout of the Orawellness data contrasted with a best case scenario using data on fluoride in organic tea published by the Weston A. Price Foundation. 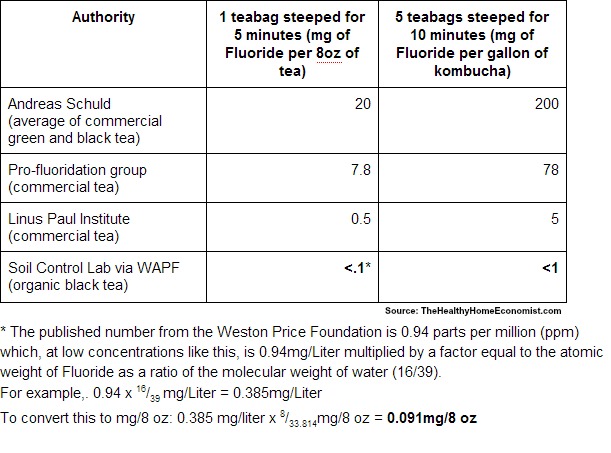 In summary, the worst-case scenario of 200 mg of fluoride per gallon of kombucha estimated by OraWellness translates to 25 mg of fluoride per 16 oz serving. While this is indeed high, two other sources measured significantly less even when commercial tea was used.

The Weston A. Price Foundation measured an even smaller amount of fluoride when organic black tea was used to brew the kombucha.

So does a 16 oz serving of kombucha contain as much fluoride as 6 gallons of fluoridated water?

No, not if organic black tea is used.

And, if organic white tea is used, the already low levels of fluoride are reduced even further as white tea is made up of the buds and very young leaves of the tea plant and contain less fluoride than even organic green or black tea.

How to Drink Kombucha Safely

The Fluoride Action Network says that the ideal goal of consuming tea safely without excessive levels of fluoride is an attainable objective.

The key is for consumers who drink tea and fermented teas like kombucha to be aware of how to source and brew these healthful beverages. This is not such a different task than learning to source quality meats, vegetables or dairy.

Ultimately, enjoyment of the many anti-oxidant, enzymatic, and probiotic properties of fermented kombucha tea is the goal. At the same time, minimizing excessive fluoride exposure is very important.

With that in mind, here are 10 ways to brew your kombucha and drink it too.

10 Ways to Avoid Fluoride in Kombucha

I will stay abreast of any further testing on the amount of fluoride in kombucha and various types of tea as it becomes available.  For now, I consider home-brewed kombucha made with organic tea to be an extremely safe beverage. The benefits of kombucha far outweigh any risks from fluoride provided proper precautions are taken to source high-quality tea and brew it properly.

How Green is Your College?