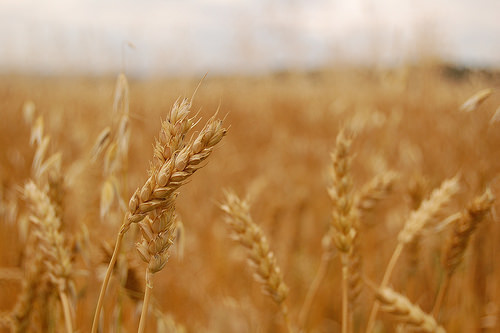 Is wheat good or bad? The recently published book Wheat Belly has caused a number of folks to mistakenly believe that genetically modified wheat has already invaded our food supply.  While it is true that GM wheat is currently being tested in the UK (not for commercial production supposedly), it has not become part of the human or animal food supply as of now.

The warnings against wheat in Wheat Belly are in reference to hybrid wheat strains which is a very different thing from genetic modification or GM wheat which, as of this writing, does not exist in the consumer marketplace.

When a plant is hybridized, the basic plant DNA is not mixed with the DNA of another, completely unrelated plant species or even the DNA of animals or bacteria which is what happens with genetic modification.

The Difference Between Hybrid Wheat and GM Wheat

Hybridization of plants has been practiced for centuries and the truth is that most of the plant foods we consume everyday are hybridized in some form or fashion. Hybridization typically occurs through selection of desirable and inheritable characteristics that are either dominant or recessive genetic traits.

In other words, hybrid wheat is not GM wheat.  Does this mean that hybridized wheat is bad for your health?

Not at all.  I personally have no problem eating high gluten hybrid wheat. Note that heirloom wheat varieties such as durum used to make traditional foodstuffs like bulgur are usually better tolerated though. I don’t feel this is the primary reason for the big belly problem that many Westerners suffer from today as claimed in Wheat Belly.

There are plenty of people who are wheat or gluten free that suffer from the same belly issues!

The real crux of the problem is the complete mess that the vast majority of Westerners have made of their gut environment with all the processed foods, sugar, rancid vegetable oils, antibiotics and other pharmaceutical use.   An imbalanced gut environment will most assuredly not be able to digest wheat that is high in gluten and undigested food rots in the gut producing excess gas, bloating, growth of pathogens, and breakdown of the gut wall that results in – you guessed it, “wheat belly” as well as autoimmune symptoms such as food allergies or gluten sensitivity.

However,  is wheat the real problem?

Fix the gut and hybrid wheat digests just fine in most cases .. particularly if you prepare the wheat properly by sprouting, soaking or sour leavening as practiced by traditional societies which breaks down gluten into more digestible form.

So if you want to avoid modern strains of wheat because you don’t digest it well, that is fine.  Just know that it really isn’t hybrid wheat that is the problem.   Getting gut health in order is the real key to solving any food digestion or sensitivity problems over the long term!

For more information about how to reverse gluten sensitivity and other food intolerance issues which go a long way toward flattening that “wheat” belly, check out these previous posts on the GAPS Diet.

Now, if and when GM wheat is introduced into the marketplace, that is a whole new ballgame as it is unknown what effect this would have on human physiology and digestion in particular.

Overwhelmed by the GAPS Diet?  Help Has Arrived!