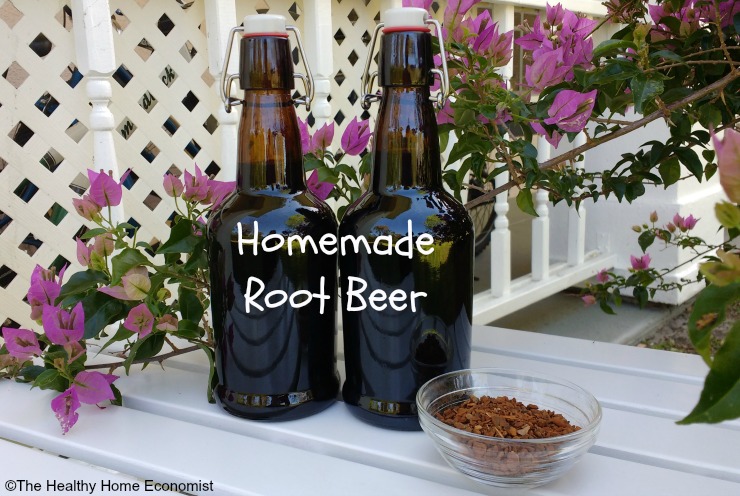 A favorite fermented beverage in our home is homemade root beer.

Root beer is a healthful and very traditional North American beverage. Enthusiasts typically brew it with sassafras bark (Sassafras albidium) or sarsaparilla (Smilax ornata). If you like hiking in the Great Smoky Mountains, you will find sassafras trees growing wild nearly everywhere you go. A handful of sassafras root bark is shown in the picture above.

Of course, modern versions of this traditional beverage don’t contain any beneficial herbs let alone the enzymes and probiotics like from centuries past.

Investigation of traditional cultures from around the world reveals that all of them utilized various types of fermented foods and beverages to assist digestion. Strong digestion keeps immunity strong. Of course, these cultures did not understand the science behind it. They only observed that by eating these foods regularly they stayed healthier. In other words, they didn’t easily develop chronic diseases and were less likely to contract infectious ones.

Fermented food and drink were also a very practical method of preservation.

We now know that traditional ferments contain an abundance of beneficial bacteria, enzymes, and nutritional co-factors not present in the non-fermented versions of the same food. Regular consumption of ferments can help you and your family sail through flu season with nothing more than a mild sniffle! These foods also encourage optimal digestion and assimilation of nutrients. In addition, they encourage healthy gut flora as they are loaded with probiotics.

You aren’t what you eat; you are what you digest!

Traditional ethnic beverages are a fun way to begin the process of incorporating fermented foods into your home. Kombucha was the first traditionally fermented beverage I started with nearly 2 decades ago. It is still a regular fixture in our refrigerator. I’ve included links to the other fermented beverages I make regularly at the end of the article.

The sassafras tree is native to a wide area of  North America primarily east of the Mississippi river. It is a medium-sized, moderately fast growing, aromatic tree that is little more than a shrub in northern areas like southwestern Maine, New York, and southern Ontario. In the south and particularly in the Great Smoky Mountains, the sassafras tree grows largest (25-39 feet/6-12 meters) providing an important food for wildlife. Deer browse the twigs in the winter and the leaves during spring and summer.

Sassafras has historically provided a variety of commercial and domestic uses for humans as well. Sassafras tea is brewed from the bark of roots, while the leaves are used in thickening soups. The spongy, orange-brown colored wood has been used in centuries past to construct barrels, buckets, fence posts and furniture. The oil is considered of value for adding fragrance to soaps and perfumes and flavor to candy.

Agriculturally, the sassafras tree is considered beneficial for restoration of depleted soil for farmland. In Indiana and Illinois, it was considered superior to black locust or pine trees for this purpose (1).

Sassafras tea has been a popular beverage for over three centuries in the lower Mississippi valley. It was first introduced to the explorer Ponce de Leon in 1512 and later to pioneers by the Cherokee people. Native Americans used sassafras as a natural blood thinner, blood purifier, and to treat skin diseases, rheumatism, and other ailments.

Root beer has also been traditionally made using sarsaparilla, a perennial trailing vine with prickly stems that is native to Mexico and Central America. It can grow to over 50 yards (46 meters) in length!

Like sassafras, sarsaparilla was valued by Native Americans for a variety of medicinal properties including gout, wounds, arthritis, cough, fever, hypertension, pain, and indigestion.

While sarsaparilla can be used to make homemade root beer, sassafras is arguably the more popular herb for this purpose in North American heritage.

With sassafras tea popular for so many centuries, it is easy to see how fermentation of the tea into root beer came to pass with the simple addition of sugar and a probiotic starter. With the Industrial Revolution so came the artificialization of root beer, starting with the pharmacist Charles Hires.

Hires apparently discovered the herbal tea base for his commercial root beer creation while on his honeymoon. It blended over twenty-five herbs, berries and roots. He introduced this proprietary root beer beverage using carbonated water at the 1876 Philadelphia Centennial exhibition. Commercial abandonment of fermented root beer soon followed. The Hires family manufactured root beer for decades and introduced and distributed bottled root beer beginning in 1893.

Root beer has no standard recipe. However, the common ingredients for modern commercial versions include sugar (GMO in North America) and artificial sassafras flavoring. Hormone disrupting soybean protein is sometimes used to create a foamy quality. Caramel coloring, a potential carcinogen, is used to make the beverage artificially brown.

You can see why the trend to homemade root beer is making a comeback with such nasty ingredients! While some versions call for processed extracts made in a factory, it is more healthful to make it the traditional way using unprocessed herbs and roots. The result can be alcoholic or non-alcoholic, carbonated or not.

The recipe I am sharing with you below is the very simple one I use that is non-alcoholic and mildly sweet with only slight carbonation from the natural fermentation process. If you wish a more bubbly beverage, you can do a secondary fermentation using sealed bottles to further enhance enzyme and probiotic activity.

The first thing you must have before brewing your own homemade root beer is a starter “bug”. The starter is the beneficial bacterial culture used to inoculate the fermentation. This is what triggers the brewing process to begin. You only have to make a starter culture one time. For subsequent batches, a few ounces of the previous batch serves as the starter.

The linked article plus video demonstration details how to make a homemade soda starter.

Note that teaching children basic cooking skills is very important. One of the key lessons is how to make tasty, healthy fermented beverages such as root beer. This will help keep them from developing a soda habit when they leave home.

Once you have your soda starter ready, you can brew your own healthful root beer. This recipe makes approximately 2 gallons (7.6 liters). This homemade root beer recipe is particularly hydrating and is very refreshing after hot, summer yard work.

Note that while I recommend sucanat as the sweetener as it is widely available, jaggery is also a very healthy option.

*Please note that sassafras is contraindicated for pregnancy and breastfeeding. 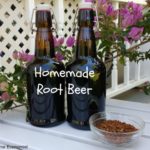 Easy recipe for root beer that is made with real herbs and cultured starter to ferment into a healthy, probiotic and bubbly beverage.

How to Make a Soda Starter “Ginger Bug” (+ Video)

How to Make “Quick Whey” (no straining)