Digestible, nourishing stuffing recipe made with sprouted bread in accordance with traditional practices that is a healthy addition to your holiday meal.

For many people, choosing the perfect stuffing recipe is critical to the success and full enjoyment of a holiday meal. The challenge is making this very important side dish in a manner that is easily digestible for all. This includes a gluten-free option for guests that might have an intolerance to this hard to digest plant protein.

If you choose to prepare a stuffing based on bread, the most digestible choice is whole grain baked traditionally. This means the grains were either sour leavened (sourdough) or sprouted prior to baking.

Unfortunately, the emphasis of conventional nutritionists to consume whole grains is without caveat. This is neither complete nor optimal advice. Traditional societies never prepared their whole grains in modern fashion as quick rise yeasted bread, granolas, pasta, and other rapidly cooked grain dishes. Moreover, they did not consume grain-based foods in excessive quantities like today.

Traditional cuisines and pre-industrialized peoples from around the world took great care to soak, sprout and/or ferment their grains before consuming them. Prior to the introduction of commercial yeast, used to make bread rise quickly, Americans and Europeans alike made slow rise bread from fermented dough starters. (1)

Such bread is commonly known as sourdough (but watch out for fake sourdough!)

How to Make Healthy Stuffing

Science has demonstrated the wisdom of these careful preparation methods. All grains and legumes contain phytic acid, an organic acid that blocks mineral absorption in the intestinal tract. Grains also contain lectins, another group of anti-nutrients.

As little as 7 hours of soaking neutralizes phytic acid. Water forms the base with small amounts of an acidic medium such as lemon juice or cider vinegar. Simple cooking or baking deactivates lectins. Soaking also neutralizes enzyme inhibitors present in the hulls of all seeds. The process also adds beneficial enzymes that increase the nutrients present especially natural B vitamins.

For those with gluten intolerance, soaking or sprouting gluten-based grains breaks down this difficult-to-digest plant protein. This is important even for nonhybridized forms of wheat such as einkorn or heirloom wheat varieties like farro.

Traditional prep also significantly improves the digestibility of gluten-free grains such as millet and teff too. Even if gluten is absent, plenty of anti-nutrients such as phytic acid can still be present.

Fermentation accomplishes the same. In some cases, this thoughtful preparation permits the consumption of grains even gluten-containing ones without triggering autoimmune symptoms.

When choosing the traditional preparation technique where the bread will be used for stuffing, I have found that sprouted bread produces the best results. Sourdough works well too, but not quite as well.

My husband always makes the stuffing, dressing and homemade gravy for our holiday meals. I thought I would share his recipe for sprouted stuffing in case this is something you would like to try to improve the digestibility and nutrient density of your Thanksgiving feast.

I recommend that you cook your turkey filled with sprouted stuffing in a (covered) charcoal grill. The slightly smoky flavor is amazing and it roasts quite a bit faster this way than in an oven.

If you would like to serve this grain-based dish along with a grain-free keto stuffing option to satisfy the dietary needs of your holiday guests, check the link for the recipe! 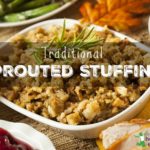 This digestible, nourishing stuffing recipe made with sprouted ingredients is a healthy addition to your holiday meal that won’t leave you feeling sluggish.

Do not use any types of Ezekiel sprouted bread as they contain vital wheat gluten, a potent anti-nutrient and cheap additive.

A loaf of sourdough bread or the equivalent in crusts may be substituted for sprouted bread as desired.

Alternatively, contact the Weston Price Foundation for a copy of its annual Shopping Guide for a list of artisanal bakers that will ship to your door.

How to Make Fresh Cream Cheese