Healthy Home Economist / Healthy Living / All About LECTINS in Food. Good or Bad?

All About LECTINS in Food. Good or Bad?

When to eat and when to avoid lectins, a class of potent anti-nutrients in many common foods. Lectins bind to carbohydrates and can contribute to inflammation and other health problems. You don’t really need to follow a lectin-free diet, just be educated on how to avoid their effects. 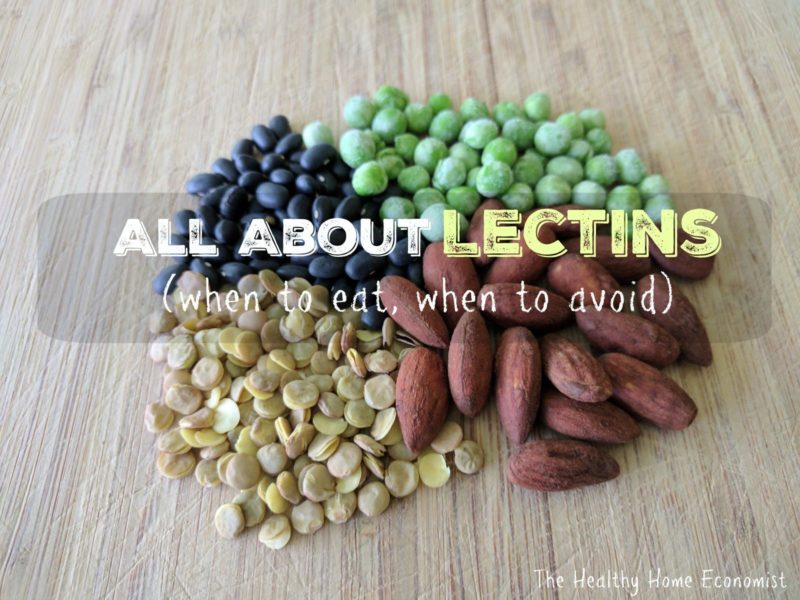 Lectins are a class of proteins that bind to carbohydrates. They aren’t to be confused with leptins, which are “peptide” hormones produced almost exclusively in fat tissue.

Lectins play a wide and varied role in all sorts of biological systems, from within the human body itself to plants, animals, bacteria and even viruses. They may appear in non-food items too, such as latex. And yes, this is the reason why some people are allergic to latex!

Lectins are anti-nutrients much like phytic acid that interfere with the absorption of vitamins, minerals, and other nutrients. They can also cause indigestion, bloating, gas and even rashes for some people.

The more problematic lectins are found primarily in the single food group known as legumes. This food classification includes various beans such as kidney, cannellini, black, fava, navy, and so forth. It also includes chickpeas, lentils, and peas. However, a wide variety of foods contain lectins, not just legumes.

Some foods are moderately high in lectins, such as some cereal grains, potatoes, seeds, and nuts. Peanuts contain a large number of lectins, including peanut oil. However, peanuts are not really nuts at all; they are legumes. The lectins in peanuts are the subject of a fair amount of discussion and debate over their healthful versus the harmful impact on people. (1)

Plant lectins actually survive digestion. Why is this noteworthy? Because it means they have the ability to penetrate cells lining the digestive tract and cause a loss of gut epithelial cells. This, in turn, damages the membranes of the epithelium lining, alters the composition of intestinal flora, and potentially initiates an autoimmune response. (2)

It sounds scary, doesn’t it?

Truth be told, nearly every type of food – including some fruits and vegetables, fungi, and more, have varieties that contain lectins. Thus, going “lectin-free” or on a “lectin avoidance diet” is a daunting task, to say the least! It leaves very few foods on the “ok to eat” list.

The bigger question is this. Is such rigid avoidance even necessary or is a more moderate approach just as effective for those sensitive to these anti-nutrients?

Why are Lectins a Big Deal?

Some people think lectin avoidance is the next gluten-free fad, a health craze waiting to happen. With baiting lines like this, “Americans spend billions of dollars on gluten-free diets in an effort to protect their health. But what if we’ve been missing the root of the problem?” it wouldn’t be surprising that desperate people would bite. (3)

Given the possible dangers of lectins, and food manufacturers’ seeing dollar signs by capitalizing on people’s fears, this is predictable. But should we be scared of lectins? Are they actually something to be concerned about? Or is it another case of a lot of hype without any real hope?

Here’s the bottom line for those of you who wish to read no further.

For most people, lectins are not something to be concerned about at all.

It is certainly true that some people are sensitive to lectins (more on that below). However, for the majority of people, most types of lectins in our foods present no issues with proper preparation and simple cooking.

To start, cooking almost completely neutralizes the more problematic types of lectins. But how completely? Is it really enough?

As little as 15 minutes of cooking or under 8 minutes of pressure cooking almost completely inactivates the lectins in food. In properly cooked lectins, no residual lectin activity remains according to research (4).

Important caveat: Lectins are resistant to DRY HEAT such as what would occur in baking. (5) Thus, cooking with legume flours for bread and similar foods is neither traditional nor prudent if the legumes aren’t soaked or sprouted first.

Also, most foods or meals provide a second line of defense against lectins – carbohydrates. Remember lectins bind to carbohydrates quite readily. The small amounts of lectins left after cooking interact with the free carbs in the foods and stomach and are effectively deactivated. Since many lectin-rich foods also supply ample carbs, and almost all these foods are commonly cooked, there is little to be concerned about. (6)

Also, many food pairings in traditional cuisines supply additional carbs. Rice and beans are one common example that perhaps points to the innate wisdom of cultures that consumed these foods without ill effect.

Lectins by Land, Sea, and Air

Lectins are truly natural, biologically important, and widespread. They are generally not something to be concerned about except in beans and other legumes. In these foods, their concentrations and types can pose real risks to our well being if consumed raw or improperly prepared!

Let’s dig into that aspect a bit more. 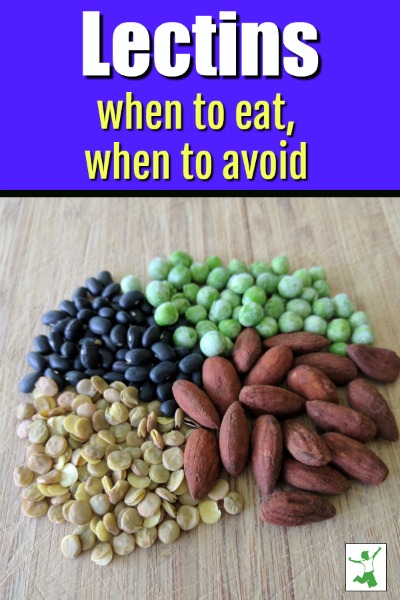 Not all Lectins are Created Equal!

Lectins, like many classes or types of chemicals, are not all the same or equal. Just like the world is full of thousands of strains of E.coli with only a few actually harmful to human health, so too with lectins. There are hundreds or more types, but only a few pose any real danger, and often, only under certain circumstances.

Some lectins, like the kind found in red kidney beans, are very dangerous. Here’s one extreme example:

In 1988, a British hospital served its staff a special lunch for “healthy eating day”. One dish contained red kidney beans. A medical journal recounts the aftermath. At 3:00 p.m. a surgical assistant vomited in the operating room. Over the next four hours, the hospital staff was rocked by vomiting and diarrhea. I can end the description there.

So much for the “healthy eating day” experiment!

Fortunately, everyone recovered by the next day, Tests didn’t reveal any of the common causes of food poisoning. Eventually, the incident was traced to the red kidney beans, which have an especially high concentration of phytohaemagglutinin. This is a harmful lectin that’s known to be dangerous and highly irritating to the digestive tract. It’s why people read that kidney beans are harmful when eaten raw. (8)

How dangerous is this particular lectin? It’s a big deal, folks. As few as four raw red kidney beans can bring on symptoms, especially in kids!

A few others, such as ricin, as even more deadly. This lectin was weaponized for military use and has even been used in assassinations and murders!

This simple story shows us when and where we truly need to be concerned about lectins. It’s in a limited number of foods, and only problematic when consumed raw. Or, of course, if we happen to be an international spy of some sort who might face lethal lectins in our line of work!

Who Should Be Concerned About Lectins?

Soaking, sprouting, sour leavening, slow cooking, curing, pickling, water swapping and the like. These techniques are important and ignoring them is unwise as it can cause health problems over time.

Many foods that are high in lectins have a long, traditional food history to go with them. Hence, the argument that they shouldn’t be consumed is misguided. (9)

It’s not just about the food, it’s about the preparation!

Following the lead of ancestral peoples provides the roadmap for consuming these foods safely so their nutritional benefits can be enjoyed without peril.

Secondly, individuals who should be concerned about lectins are those who for genetic reasons are extremely sensitive. Those suffering from conditions known to be possibly related to or exacerbated by lectins are wise to tread lightly with legumes too. More on this below.

The only tangible downside to beans I can think of, from a nutritional standpoint, is that some people have a hard time with the large quantity of fermentable fiber they provide, particularly people who are sensitive to [short chain carbs] FODMAPs. (9)

While many high lectin foods are incredibly nutritious and traditional, it does appear that in certain circumstances, our bodies ability to handle lectins can be compromised, perhaps substantially.

But if we all eat lectins, why don’t we all get insulin dependent diabetes, rheumatoid arthritis, IgA nephropathy, and peptic ulcers? Partly because of biological variation in the glycoconjugates that coat our cells and partly because these are protected behind a fine screen of sialic acid molecules, attached to the glycoprotein tips.10 We should be safe. But the sialic acid molecules can be stripped off by the enzyme neuraminidase, present in several micro-organisms such as influenzaviruses and streptococci. This may explain why diabetes and rheumatoid arthritis tend to occur as sequelae of infections. This facilitation of lectins by micro-organisms throws a new light on postinfectious diseases and makes the folklore cure of fasting during a fever seem sensible. (10)

In sum, should you worry about lectins? For those that consume traditionally prepared legumes and soaked beans, the answer is probably not. Most people tolerate these foods quite well when cooked properly.

However, individuals eating a mostly raw diet and/or those with certain acute or chronic infections or other conditions may find that lectin minimization or avoidance is prudent. Avoidance may be temporary while healing occurs or permanent depending on the severity of the situation. Best to consult with a trusted functional practitioner to help guide you with those decisions if you suspect these widespread anti-nutrients are a problem.

Determining the Best Traditional Diet for YOU