Healthy Home Economist / Whole Grains and Cereals / 3 Types of Farro. Should You be Eating this Ancient Grain? 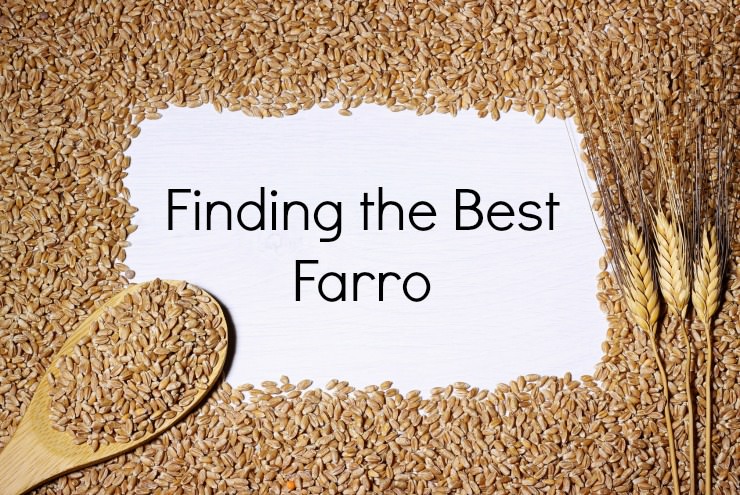 Farro is an ancient grain that is rapidly growing in popularity as more people discover that modern wheat varieties extremely high in gluten are difficult to digest. This is especially true if the wheat is not traditionally prepared via sprouting, soaking, or sour leavening.

Unfortunately, there is some confusion about whether farro is truly an unhybridized, low gluten form of wheat that those who are gluten intolerant can potentially eat without symptoms.

The problem occurs because the exact definition of farro continues to be debated. Here’s the lowdown about this ancient grain so you know how to source the best kind and understand exactly what you are getting if you choose to buy it.

What Exactly is Farro?

Maria Speck, author of Ancient Grains for Modern Meals writes that the term farro is commonly used when referring to three ancient wheat varieties (not to be confused with heirloom wheat) first cultivated primarily in the Mesopotamia area of the Middle East (the Fertile Crescent) and still grown today in Italy. These ancient wheat varieties all considered to fall under the farro umbrella include:

If you see farro at the healthfood store in a bag, know that it is typically the emmer variety and likely imported from Italy.

The confusion arises because einkorn is the only one of the three farro varieties that is completely unhybridized and still in ancient form.

Emmer and spelt, while certainly less hybridized and lower in gluten than modern wheat varieties, are hybridized nonetheless.

Even people who are knowledgeable about traditional baking with different wheat varieties get confused about farro. For example, this comment was posted on my article about how to make a sourdough starter:

I’m with you all the way until you say Einkorn is the only unhybridized flour available. It is one of the more common ones, usually lumped together with Emmer and Spelt. My severely gluten intolerant husband reacts to spelt as he does to modern wheat so I toss that one out the window.

No doubt this person is reacting to spelt because it is hybridized and even though classified as farro, cannot be compared with the digestibility and the good gluten contained in einkorn.

The Genetics of Farro

Human consumption of wild einkorn, the most ancient of all wheat varieties and the only one of the three types of farro to remain completely unhybridized, dates back approximately 12,000 years ago to the Paleolitic Era, also referred to as the Old Stone Age (1).

Hunter-gatherers living at that time in the Fertile Crescent discovered that they could plant and cultivate the einkorn seeds they gathered for food. This marks the birth of agriculture and humans abandoning a nomadic life for the first time to settle into civilized communities.

The genetics of einkorn wheat remains wild and unchanged to this day, while all other types including the farro varieties known as spelt and emmer, were created via hybridization.

How to know that einkorn is unhybridized and spelt and emmer are not?  The evidence is in the sets of chromosomes each farro variety possesses.  Most plants are diploid, meaning they have two sets of 7 chromosomes – one from a male parent and one from a female parent.  Einkorn is a diploid (wild) wheat.

When wheat is hybridized, additional sets of (7) chromosomes are added either by man or nature. Emmer wheat appears to have been hybridized about 2,000 years after einkorn via the union of two wild grasses. This resulted in a total of 28 chromosomes. Kamut (an ancient grain found in Egyptian tombs) and durum wheat are descendants of emmer. Bulgur is a cereal and traditional food commonly made from the durum variety.

Spelt, the third farro variety, was the first wheat hybridization that occurred between cultivated emmer and a wild grass, creating a wheat variety with 42 chromosomes (6 sets of 7). Modern wheat varieties are descended from spelt.

Farro Hybridization Not the Same as GMO

It’s very important to understand that hybridization of a plant does not mean that it has been genetically modified.

Hybridization typically occurs through selection of desirable and inheritable characteristics that are either dominant or recessive genetic traits.

Genetic modification of wheat, on the other hand, involves incorporating genes from other organisms – even animals, bacteria or viruses – into plants. In short, hybrid wheat is not GMO wheat. As of this writing, GMO wheat is not being legally cultivated anywhere in the world.

What Type of Farro is Best?

Now that you know about the three types of farro, einkorn, emmer and spelt, which is most desirable to eat?

In my view, einkorn is the clear winner, and the ancient wheat that I choose to buy and use in my home because it is the only farro variety that is still in a truly ancient state. Being in the wild state as it was originally 12,000 years ago during the Paleolithic Era means that einkorn is naturally low in gluten. Not only is einkorn low in gluten, the gluten is different from the gluten molecules present in the other two farro varieties: emmer and spelt.

Note that einkorn would not be appropriate for those with Celiac disease.

Eat Your Farro, But Be Selective About It

Because the term “farro” can refer to any one of three different varieties of ancient wheat, only one of which is truly unhybridized, it is best to buy wheat labeled as einkorn and not just farro. Buying a bag of farro, as mentioned above, usually means you are buying emmer, not einkorn.

Another problem with buying farro at the store is that the label doesn’t tell usually tell you if the farro is whole, semipearled (part of the bran removed) or pearled (no bran at all). In my experience, buying whole farro labeled as einkorn is the best way to go because all the nutrients are retained this way. In addition, when you grind einkorn, it is a much lighter and whiter flour even in its whole grain state than modern wheat, spelt, or emmer. There really isn’t any need to use semipearled or pearled farro when you are choosing the unhybridized einkorn variety.

No doubt about it, farro is expensive. It is a low yield crop compared with modern wheat, and the price is indicative of this.

Because einkorn is the only type of farro I use in my home, I was excited to discover that my source of organic einkorn is now available in a 10 lb bag, which is much more cost effective than the 16 ounce bags I’ve been using for many years.

If I was unable to find a source of organic einkorn, my next choice would be emmer because the hybridization occurred between two wild grasses.

What source of farro do you prefer? Have you found it to be more digestible than modern forms of wheat?