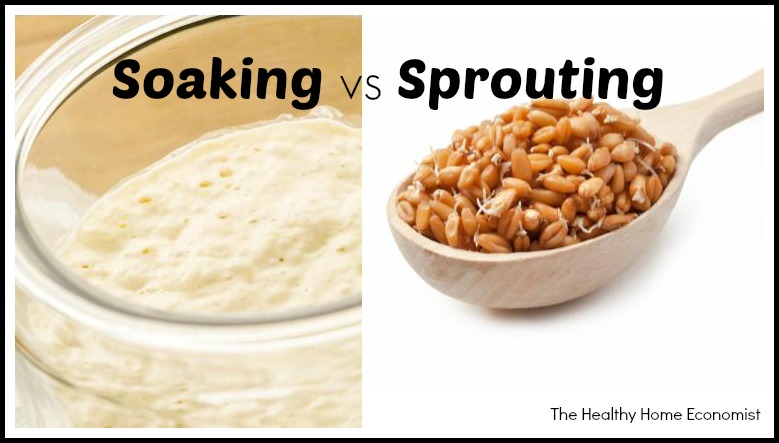 The careful anthropological study of ancestral societies reveals a surprising truth. Healthy, chronic disease-free traditional cultures who ate grains did so only after careful processing. The methods employed included sprouting, soaking, and/or sour leavening (sourdough). This thoughtful preparation was employed to remove potent anti-nutrients and break down complex food molecules contained in all grains, nuts, seeds, and legumes.

These anti-nutrients include phytic acid, lectins, complex sugars, gluten, tannins, and more. These substances not only block the absorption of food nutrients, but they also have the potential to irritate the intestinal tract over months and years. The result for many people is the eventual triggering of all manner of chronic digestive disease and nutritional imbalances.

In some cases, these traditional preparation methods increase nutrient value as well. Sprouted flour, for example, notably adds significant Vitamin C as well as increasing the amount of some B Vitamins by a large margin. Pre-soaking beans and other legumes prior to cooking, soaking raw nuts before dehydrating, and soaking flour before baking does not confer such large nutritional boosts. This leads some to believe sprouting is the superior preparation method.

Let’s examine this question further. Which method of preparing grains, seeds, nuts, and legumes is truly optimal for improving food digestibility and reducing anti-nutrients? Is it sprouting, soaking, or fermentation and can these methods be used in conjunction with each other?

As mentioned above, among traditional foodies, the main techniques for dealing with the dicey side of grains and other seeds include soaking, fermentation, and sprouting. Note that sourdough fermentation can be used in conjunction with sprouting, but has more limited application.

With soaking, after grains are milled or cracked, they are mixed with a liquid which is generally acidic and rich in good bacteria. Then, the mixture is allowed to sit overnight or up to 24 hours. This permits various biological processes to break down problematic portions of the grain and neutralize anti-nutrients. In addition, the soaking process predigests certain portions of the foods. This renders them more nutritious and less taxing for digestion to metabolize and absorb.

According to the Eden Foundation,

Generally, a significant increase in the soluble fraction of a food is observed during fermentation. The quantity as well as quality of the food proteins as expressed by biological value, and often the content of watersoluble vitamins is generally increased, while the antinutritional factors show a decline during fermentation (Paredes-López & Harry, 1988).

However, numerous studies show that the soaking times most people use (around 12-18 hours) are not sufficient to result in a substantial breakdown of the anti-nutrients in many grains. This is especially true in non-temperature controlled situations such as a cool kitchen environment (1).

Sprouting in a Nutshell

Sprouting is a far more complicated approach to bringing seeds back to life. It involves first soaking whole, unground grains or other seeds, then placing them on special trays or in jars where they can be rinsed with water once to twice per day. Within a few days, this causes them to germinate and sprout. One needs to be very careful the seeds do not mold during the process.

So which method is better? Which gives us the most nutritional bang for our buck and effort?

Unfortunately, science presents a pretty conflicted and at some points confusing picture about what works best for reducing phytic acid and other anti-nutrients in grains, seeds, legumes, and nuts.

Sprouting grains is a wonderful step in the fermentation process. But it does not remove that much phytic acid. Typically sprouting will remove somewhere between 20-30% of phytic acid after two or three days for beans, seeds and grains under laboratory conditions at a constant 77 degrees Fahrenheit. Sprouting was more effective in rye, rice, millet and mung beans, removing about 50% of phytic acid, and not effective at all with oats.

Note that sprouting only really works well with high phytase grains and seeds such as buckwheat, rye, and wheat including einkorn. Moderate or low phytase grains like oats see minimal reductions in their phytic acid content. Other studies paint an even more complex or confusing picture, such as this one:

Germination, but not soaking, increased phytase activity 3 to 5-fold in some cereal grains and legume seeds, while the influence on phytic acid content was insignificant in most materials tested (4).

In other words, the influence of sprouting caused a massive increase in phytase but little change in phytic acid content!

Another study published in the journal Critical Reviews in Food Science and Nutrition concluded:

Sprouting of grains for a limited period causes increased activities of hydrolytic enzymes, improvement in the contents of certain essential amino acids, total sugars, and B‐group vitamins, and a decrease in dry matter, starch, and antinutrients. The digestibilities of storage proteins and starch are improved due to their partial hydrolysis during sprouting. The magnitude of the nutritional improvement is, however, influenced by the type of cereal, seed quality, sprouting conditions, and it is not large enough to account for in feeding experiments with higher animals (5).

Sprouting: Worth the Effort?

Sprouting definitely does some good, but some of that good is offset by cooking. This is due to many of the vitamins that sprouting creates getting lost or significantly reduced from the heat of the stove or oven. Cooking, however, is a vital step for rendering grains and legumes digestible post soaking or sprouting. Some seeds (such as pepitas) and nuts can be sprouted or soaked, dehydrated and eaten raw without cooking. Hence, whether or not sprouting is beneficial depends partially on the food choice as well.

How Soaking and Sprouting affects Gluten

If sprouting and soaking help reduce phytic acid and other harmful substances, what do they do to gluten? The answer is, not much.

Gluten is a protein and neither soaking nor sprouting does much to change the protein structure of foods.

It isn’t until you move from a simple overnight soak to its close cousin, full fermentation (which takes about 2-3 days), that you create an environment where beneficial bacteria begin to break down gluten and other more complex substances in your food.

So if you have issues digesting gluten, fully traditional sourdough bread is the only safe option. No fake sourdough at Panera, the supermarket or health food store allowed (this brand of sourdough bread is widely available and authentic)! This is the only way to reduce and break down sufficient gluten to turn bread made with wheat or rye flour into something safe for your consumption. More on gluten safe sourdough bread in the linked article.

Here are some simple guidelines to help you decide whether to soak or sprout a particular grain, legume, seed or nut. Choosing the optimal approach will ensure that the time spent results in a successful reduction in anti-nutrients.

First, neither soaking nor sprouting alone will remove sufficient phytic acid and other anti-nutrients in grains and legumes! Cooking is absolutely crucial to bring these compounds down to an acceptable level, especially for high phytate and low phytase grains.

It is best to start with organic, unheated or treated, whole or freshly milled grains. You may be surprised and shocked to learn that non-organic grains are showing up with shockingly high concentrations of gut destroying Roundup! More on that in this article about toxic wheat. Why worry about heat-treated grains if you’re going to cook them anyway? If the grains have been heat-treated, the phytase will already have been degraded/damaged. This greatly affects whether your soaking is successful.

If possible, mill or grind your own grains into flour! Grains lose a startlingly high amount of their nutritional value within just a few days of grinding, along with the delicate omega-6 fats oxidizing. This means the addition of free radicals.

If preparing grains that are low in phytase but high in phytic acid (like oatmeal), combine them with small amounts of a high phytase grain (like buckwheat, rye, barley or spelt). For example, when soaking oatmeal overnight, add a few spoonfuls of gluten-free buckwheat groats or buckwheat flour to add phytase to assist the breaking down of the phytic acid. Do you have to do this? No, but doing so will ensure a greater percentage of phytic acid is deactivated.

When grinding and soaking grains or sprouting them, make sure the room temperature is sufficiently warm. Between 75-80 °F/ 24-27 °C is generally best.

If sprouting, first thoroughly low temperature dry using a stainless steel dehydrator or oven set no higher than 150° F/ 66 °C. Then, grind and bake or cook.

If you sprout your grains, they will still benefit from being low temperature dried, ground, and then cooked. The enzymes, aka “living aspect” of sprouts is FAR OUTWEIGHED by the reduction in anti-nutrients and other problematic compounds that cooking provides (6). Eating sprouted and then low temperature dried nuts and seeds are fine.

Also note that when soaking, using an acidic medium that doesn’t contain calcium results in better phytic acid reduction! This means that apple cider vinegar or lemon juice works better than liquid whey. This is good news for those allergic to dairy.

Traditionally, the anti-nutrients in corn were handled with a special process called nixtamalization. This involved using limewater made with dolomite powder (not the fruit!) or another alkaline solution to soak and hull the grain. What is produced is often referred to as masa. This process can greatly reduce phytic acid and substantially increase the nutritional profile of the corn and the availability of various nutrients especially Vitamin B3 if done properly (7).

This article plus video on how to make limewater for soaking corn provides additional information.

Like with other approaches, the masa or soaked corn is turned into other things and then fully cooked before eating.

Which method of preparation – soaking or sprouting  (or both) – do you use to prepare your grains, legumes, seeds, and nuts? Do you find that one method over the other renders a more digestible food?