The processing and common uses of palm and cane jaggery, a traditional sweetener used for millennia that is completely unrefined and loaded with minerals like iron and calcium. 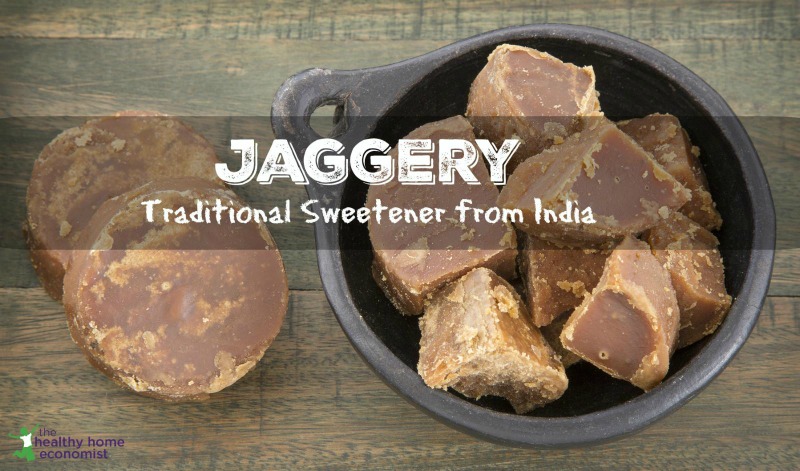 Jaggery is a traditional sweetener with a multi-thousand-year history of use in Asia, Africa, and South America. Few sweeteners besides raw honey have had a more widespread influence.

While most in Western countries are still unfamiliar with this ancestral food, it is an excellent and nutritious substitute for more processed sweeteners as long as you know what you should be looking for!

There are two main types of jaggery. First, there is date jaggery also called palm jaggery. The two different names for the same thing exist because of the sweetener’s source – the date palm tree.

Palm jaggery is made by collecting the sap of the date palm tree. Artisans then boil it in a process similar to the Native American approach to making maple syrup and maple sugar.

This type is more prized and hence difficult to find outside of the regions where date palms are traditionally tapped.

Second, there is sugarcane jaggery.

This more common type of jaggery is made by evaporating raw sugarcane juice without separating the molasses from the crystals. Once the sugarcane juice is sufficiently boiled down, it is poured into molds and cut into blocks.

In South America, jaggery is known by the name panela. Native peoples of India refer to it as gur. Other regional names are common in India such as: (1)

The quality of the sap is everything for gur derived from sugarcane. A wide variety of flavors are possible for this reason, with some having a salty/sweet flavor and others, more rich tasting.

No matter how you personally choose to describe it, this traditional sweetener is delectable on the tongue! As one writer put it, jaggery is like a cross between “spicy molasses and buttery caramel.” (2)

You can see why it is so popular!

To some degree, sugarcane jaggery is very similar to other forms of cane sugar. The first steps in producing both products are identical. Sugarcane is harvested and then boiled to extract the sap. Note that processing beet sugar is different even though it is the same in look and taste to refined white cane sugar.

That’s where the similarity ends.

Where refined forms of sugarcane (white and turbinado sugar) then undergo significant further processing, jaggery does not.

Instead, the sugarcane sap is continuously boiled until it transforms into a thick paste. Artisanal producers then pour the paste into molds or blocks to harden.

Differences exist even between unrefined cane sugar (sucanat) and jaggery such as:

The only tests on jaggery’s glycemic index (GI) are from the late 1980s. At that time, it scored the high 80s. The risk of such a significant blood sugar spike may be why traditional cultures in India ate only small amounts at the end of a meal containing fat. This would mitigate the effect on blood sugar significantly.

Don’t get discouraged, however. Jaggery really needs to be retested! Current GI testing of white sugar is 80, which is lower than the decades-old tests on jaggery. Hence, it is safe to conclude that the true GI is likely similar to sucanat (43). In particular, palm jaggery and sugarcane jaggery need to be compared both nutritionally and for their individual effects on blood sugar.

Here is the GI of other common sweeteners for comparison:

Jaggery is rich in a number of nutrients, such as magnesium (30%), along with phosphorus, iron, calcium, and potassium. In addition, it tests higher than most sugars in antioxidant levels likely due to the tremendous concentration of molasses. (3)

Jaggery’s excellent magnesium content is probably why traditionally and even today, many people and doctors in India use and recommend it for a wide range of ailments. These uses include relief from muscle and leg cramps, insomnia, and even irregular heartbeat.

Benefits in Health and Medicine

Given how traditional and widespread sweetener use is across people groups and history, we first need to realize that sweet things are not inherently bad!

If you doubt this, consider that we have taste buds specifically geared for detecting sweet! If this type of food was not beneficial to our biology in some way, these taste buds would not exist! Consider that healthy and robust Native Americans prized maple syrup and maple sugar.

Unfortunately, our natural affinity for sweet can become abused with refined and/or artificial sweeteners. These additives are included with nearly all processed foods causing a sweet addiction for many.

Let’s consider how jaggery stacks up in comparison with other sweeteners on the market. First of all, it is clearly a “good” sugar as healthy traditional cultures enjoyed it for many millennia. It is whole and easily handcrafted with none of the nutrients stripped away.

However, sugarcane jaggery is probably not as nutritious as the less commonly available date and coconut jaggery. However, there is little data out there currently to verify this hunch.

There are also few studies on jaggery. It does contain more vitamins and minerals than many other types of sugar, especially white sugar, high fructose corn syrup, stevia, and sugar alcohols such as xylitol. Most likely, jaggery ranks just below or right alongside honey, maple syrup, and palm sugar in terms of nutritional value.

But unlike these other well-known sweeteners, jaggery doesn’t have nearly as much research about its benefits on the books, at least not yet. The research that is available is primarily animal studies. For example, the Journal of Environmental Pathology, Toxicology and Oncology published a study in 2012 which demonstrated that jaggery is helpful in reducing renal damage in rats. (4)

Another published in Environmental Health Perspectives found that rats were able able to better tolerate dusty and smoky environments when fed jaggery and that it proved protective of smoke-induced lesions in the lungs. (5)

Hopefully, human studies will be forthcoming in the future!

Ayurvedic medicine identifies jaggery as beneficial for the treatment of respiratory infections. (6)

In India, it is a staple and considered important for preventing or helping with many health conditions. Dr. Manoj K. Ahuja of Sukhda Hospital says:

It is best consumed during the winter months because winter is the season of fresh jaggery. Since it is rich in many vital vitamins and minerals, jaggery boosts immunity, keeps the body warm, helps treat cold and cough and controls the temperature of the body. This natural sweetener has been a great go-to ingredient in India since time immemorial. (7)

Should You Try Jaggery?

For some people, especially those wanting to make traditional foods and meals with their original ingredients, it may be worth the effort to source quality jaggery either of sugarcane or date palm origin. For others, it might not add much that sucanat and coconut sugar don’t already offer.

Your mileage may vary! This is especially true if your ancestry is such that jaggery is an important ingredient to achieve the proper flavors of your native cuisine.

Jaggery is becoming much easier to find and more affordable than ever before. Even organic jaggery compares quite favorably in price with organic sucanat pound for pound (this brand is an excellent source).

So, if you’ve been wanting to switch from whole cane sugar to a sweetener with far richer flavor, it’s a great time to try gur in your favorite recipes.

Like many traditional foods, ethnic groceries and online sellers are often the only place to find something like jaggery. It is best to stick with organic when possible, as sugarcane production is just as prone to pesticide, herbicide and the other ills of industrial agriculture as many other crops and foods. (5, 6)

In addition, while date palm trees are not usually subjected to spraying, sugarcane crops most definitely are with some abusive producers even using glyphosate for pre-harvest desiccation in a manner much like conventional wheat. Conventionally grown sugarcane jaggery should be avoided for this reason.

Some kitchen dishes require a liquid sweetener rather than a powder. In those instances, this healthy simple syrup recipe makes an excellent substitute for molasses or maple syrup for drizzling on pancakes or waffles. It is delicious on ice cream too!

Making it is easy once you’ve sourced a quality provider of jaggery powder or blocks for grating (where I buy). I would recommend not ordering untested overseas sources of jaggery as they could be a source of lead contamination.