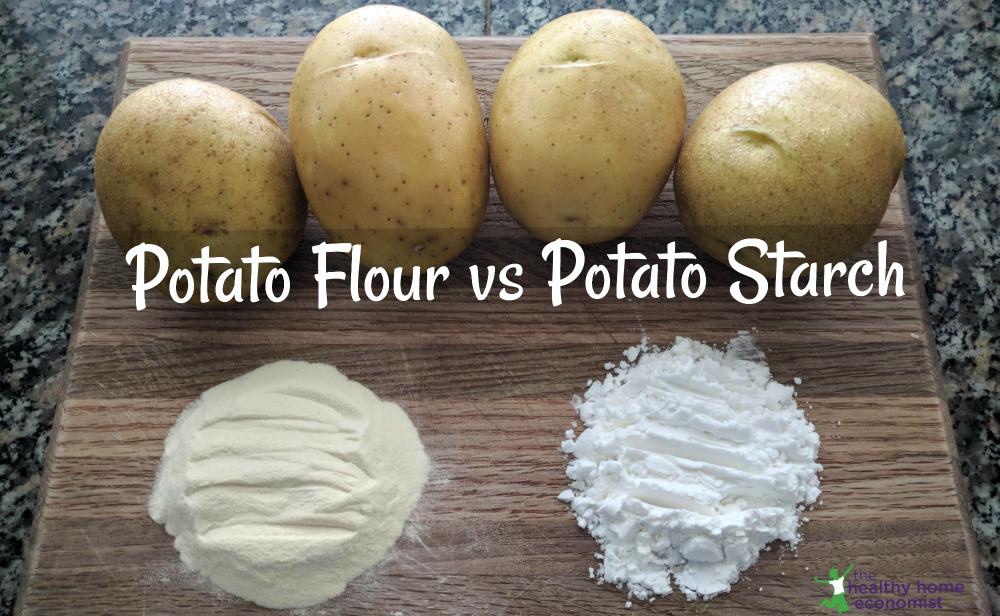 You might be surprised to learn that Americans eat a great deal fewer potatoes than they used to. Down from a high of around 80 pounds annually per person during the middle of the last century, people today eat only about 30-40 lbs per person per year in the United States. Not surprisingly, half of all the potatoes grown in the USA end up in chips, fries, and other processed products. (1, 2)

In opposition to this overall decline, some forms of potato consumption are actually increasing, especially potato flour and potato starch. This trend is due in large part to the increase in people following a gluten free diet as well as the positive research on how this special type of vegetable starch benefits health.

However, potato flour is most definitely not the same as potato starch.

This is a confusing point for many people as other similar gluten free flours like arrowroot powder, flour and starch are essentially the same.

Now that we have the semantics straight, how exactly do potato flour and potato starch differ?

Quite dramatically as it turns out.

Potato flour is made by cooking, dehydrating, and then grinding potatoes, generally whole ones. You can use almost any type of potato to make potato flour, though it appears that Russet is the most common in US potato flour products.

Potato flour is a whole food with all the components of a whole potato also found in the flour.

You can see in the picture above that the potato flour to the left has a beige color compared to the pure white potato starch on the right. The color is indicative of its whole food status as it is the same color as a slice of potato.

Before you jump to the conclusion that potato flour is better though, read on. Also note the pitfall that some brands of potato flour contain preservatives and other additives.

When it comes to the food industry, things are rarely black and white are they?

Food manufacturers produce potato starch by extracting and processing only the starchy component of potatoes. To accomplish this most effectively, they prefer using varieties that are especially high in starch. These spuds differ from normal potatoes and those procured for potato flour.

Potato starch, unlike potato flour, has little nutritional value other than the value of the resistant starch (RS) it contains. This is visually apparent from its pure white color as seen in the photo above.

Spud starch is sometimes used as a grain free thickener for soups and sauces, while the flour is preferred as a gluten free baking and cooking option.

In my article on green banana flour, I discussed how resistant starch easily breaks down during heat exposure. The same applies to plantain flour and any other food that contains RS.

Since potato flour comes from cooked potatoes, much of the RS is broken down during production. Some RS does reform after cooling, but the amount is less than in uncooked potatoes.

Processing the potatoes begins immediately after the quality check. First the potatoes are washed and crushed. After this the crushed mass is sifted and the tiny starch granules are retained. The starch is washed out and dried to powder. (3)

Like any RS, potato starch will break down during exposure to heat or cooking. So while it starts high in RS, the amount you actually get depends on if you consume it raw or add it to something that is cooked.

The starch molecules or leucoplasts easily separate from the rest of the potato components during processing.

In addition, this process appears to be environmentally friendly for most potato starch operations.

The leftover edible component is generally used as animal feed, while anything else is applied back to fields. This results in a no-loss system in terms of nutrients that don’t make it into the potato starch products.

One area of concern with both potato flour and starch is the potatoes used in their production. In the United States, potatoes are one of the most chemically intensive crops. The fact that potatoes are a root vegetable and grow directly in the soil involves the use of even more chemicals.

Suffice it to say that conventional potatoes do not make it into Environmental Working Group’s annual “Clean 15”. In fact, for the years 2017 and 2018, potatoes were ranked in EWG’s Dirty Dozen. (4)

The USDA reports that conventional potatoes test positive for a whopping 35+ different pesticides! (5)

One of the most noxious chemicals in potato production is chlorpropham. Three-quarters of all potatoes test positive for its residue. Studies show that exposure risks a number of negative health effects.

Chlorpropham is moderately toxic by ingestion. It may cause irritation of the eyes or skin. Symptoms of poisoning in laboratory animals have included listlessness, nose bleeds, protruding eyes, bloody tears, difficulty in breathing, prostration, inability to urinate, high fevers, and death. Autopsies of animals have shown inflammation of the stomach and intestinal lining, congestion of the brain, lungs and other organs, and degenerative changes in the kidneys and liver. Chronic exposure of laboratory animals has caused retarded growth, increased liver, kidney and spleen weights, congestion of the spleen and death. Long-term exposure to chlorpropham may cause adverse reproductive effects. (6)

Since it is a root crop, conventional farmers often spray their potato fields with fungicides. They use herbicides to control weeds. Potatoes face a wide variety of pests, so they get hit with various pesticides as well.

The number of chemicals used on and available to potato growers is staggering, as documented by companies who sell chemicals that cover potato production from field to fork. (7)

After harvest, conventional spuds are not yet in the clear. Bugs love to attack post harvest potatoes, so they may endure yet another round of pesticides to preserve the crop.

Food companies will almost certainly use anti-sprouting chemicals as well to keep potatoes dormant until the consumer buys them or they get processed into various other potato products.

Farms and processors do not use anti-sprouting chemicals on organic potatoes. This means they don’t last as long on the shelf, but it is a good sign for the consumer because they sprout like a real potato should!

While a good quality potato should sprout, you don’t want to necessarily eat it. Sprouted potatoes may contain excessive amounts of solanine which causes digestive distress. Be sure to always cut off potato sprouts off before cooking. And if the potato has sprouts and is green under the skin, discard.

In 2017, the FDA approved production of three varieties of GMO potatoes, the Russet Burbank, Ranger Russet and the Atlantic. (8)

GMO potatoes claim to fame? That only half the amount of fungicides is used to grow them.

If that sounds pitiful to you too, stick with organic potatoes.

Why Potato Starch instead of Potato Flour?

Resistant starch has shown a great deal of promise in helping improve gut health, resolve conditions that lead to chronic diseases, and reduce/eliminate belly fat, among other benefits.

While potato flour is certainly not an unhealthy food, it contains little RS. Hence, potato flour health benefits do not match those of potato starch, which is extremely high in RS.

Many low carb diets still include potato or a similar RS starch to ensure that the beneficial microbes in the gut receive sufficient food (prebiotics) to stay functional.

Some have called RS “fertilizer” for our good guy microbes. Science supports such an assertion! According to Chris Kresser LAc,

The normal human gut has hundreds of bacterial species, some good and some not so good. The overall number and relative quantity of each type has a profound effect on our health and well being. Resistant starch selectively stimulates the good bacteria in our intestines, helping to maintain a healthy balance of bacteria. (9)

How to Use Potato Starch

The majority of Americans get far too little resistant starch despite a diet heavy in carbs. Because potato starch has little to no taste, it makes an easy boost to the amount of RS in the diet. Add to smoothies or take a spoonful each day mixed with filtered water.

It is one of the best substitutes for cornstarch for thickening soups and sauces as well.

If your diet is devoid of any decent sources of RS, you have persistent belly fat or health conditions that RS may help, there is little risk in adding some to your diet. Research suggests 15-30 grams per day to be therapeutic, but build up slowly to avoid detox symptoms.

Just make sure to choose potato starch that comes from organically grown or at the very least, nonGMO potatoes!

This brand is recommended as an excellent and budget friendly source.

(9) How RS Will Make You Healthier and Thinner

Why We Switched to Health Care Sharing (bye-bye Insurance)