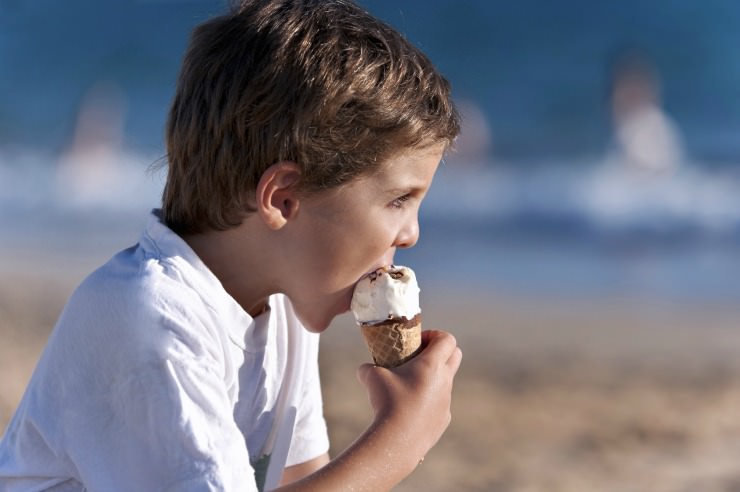 One thing I try to do on this blog is alert folks to the sneaky, underhanded and frequently toxic chemicals that Big Food processors add to their products.

One of these dirty little secrets is the fact that propylene glycol, a cosmetic form of antifreeze, is added to commercial ice cream. (1)

You see, when you make ice cream at home, you immediately notice that it is as hard as a rock very unlike store ice creams (even the organic ones) that seem to scoop out of the container so conveniently.

Homemade ice cream has to be taken out of the freezer and softened on the counter for a few minutes before you have any hope of scooping some out into a bowl.    I even store mine in a shallow, Pyrex baking dish as this makes it much easier and faster to scoop out when I want some.

Antifreeze, then, is simply ice cream manufacturers’ answer to hard as a rock ice cream and the ice crystals that inevitably form as it is shipped long distances and moved between many different freezers before it finally makes it to your supermarket.

If you’ve ever left homemade ice cream on the counter too long and then put it back in the freezer, you notice how icy it can get.   Antifreeze added to store ice cream helps prevent this from happening!

Sometimes when I tell folks this for the first time, they have trouble believing it.  Why?   Because propylene glycol isn’t listed anywhere on the ice cream label or ingredients list.

While it may come as a shock to some of you, there is such a thing as an “Industry Standard“, which means that if everyone does it, you don’t have to label it!   For those who need specifics, USDA reg 21 CFR 101.100 deals with labeling exemptions dealing with incidental food additives.

Nice, huh?   Where I grew up, this was called deceit.

Can you believe it?  Just because commercial ice cream manufacturers make a practice of adding a little bit of antifreeze to their ice cream, then it doesn’t have to be labeled! (2)

I don’t even trust organic ice cream as it is way too easy to scoop out of the container right out of the freezer for my comfort level.   My efforts to confirm this one way or the other were not successful, so at this time, it is only a very strong hunch.

Just to get you a little more hot under the collar, the FDA actually had the gall to grant GRAS status to antifreeze!    What is GRAS?   It is an acronym for “Generally Recognized As Safe”.

Well, isn’t that interesting? Antifreeze is safe to eat!   You learn something new every day!

Wait a minute!   Antifreeze safe to eat, yet a dog would probably die if a car radiator leaks in his owner’s driveway and he laps some of it up?

Ok, ok, I know that antifreeze used in radiators is ethylene glycol, but the fact is that propylene glycol (PEG) is a related chemical that is known to cause heart, kidney, liver, and central nervous system damage if sufficient quantity is absorbed by the body. In addition, depending on the manufacturing process used, PEGs may be contaminated with measurable amounts of ethylene oxide and 1,4-dioxane. The International Agency for Research on Cancer classifies ethylene oxide as a known human carcinogen and 1,4-dioxane as a possible human carcinogen. Ethylene oxide can also harm the nervous system, and evidence has shown that it may interfere with human development.

Given that Americans eat approximately 5 times the ice cream they did only 50 years ago, it is anyone’s guess what the long term effects of the small amounts of propylene glycol in-store ice cream might be (source: WAPF).

Side Effects of Eating Antifreeze

Many people might wonder why whenever you eat commercial ice cream or devour an ice cream cone at the Mall, the next day you might seem to have a very close relationship to the bathroom.

Turns out that a side effect of consuming antifreeze is loose bowels, even diarrhea. Propylene glycol is even used to clean out the bowel before surgery and is a primary ingredient in some over the counter constipation meds!

By the way, there are MANY other chemicals added to commercial ice cream that are toxic and unlabeled. Piperonal, for example, is used in place of vanilla and is a chemical used to kill head lice, so you’re not even safe getting a basic flavor like plain vanilla ice cream! (3)

Watch out for so-called “premium” ice creams like Jack Nicklaus Ice cream. Even the ludicrously named “Homemade Vanilla” has zero vanilla actually in it. You get to pay extra for …. chemicals!

What if the ingredients label lists vanilla?  Does this mean there is no piperonal in there? Not necessarily. A mixture of piperonal and vanilla could be used with the vanilla listed (to make the customer happy) and the piperonal not listed (to fool the customer and increase profits).   Not surprisingly, piperonal is cheaper to use than vanilla.

Food manufacturers are really good at the cat and mouse games and are complete virtuosos at playing the USDA regulations.

So, if you aren’t into eating antifreeze with your ice cream, check out my recipe plus video demonstration on how to make healthy ice cream!

Salt and Pepper in Bone Broth: Do’s and Don’ts

Family Doesn’t Get Your Real Food Habit? Here’s Why