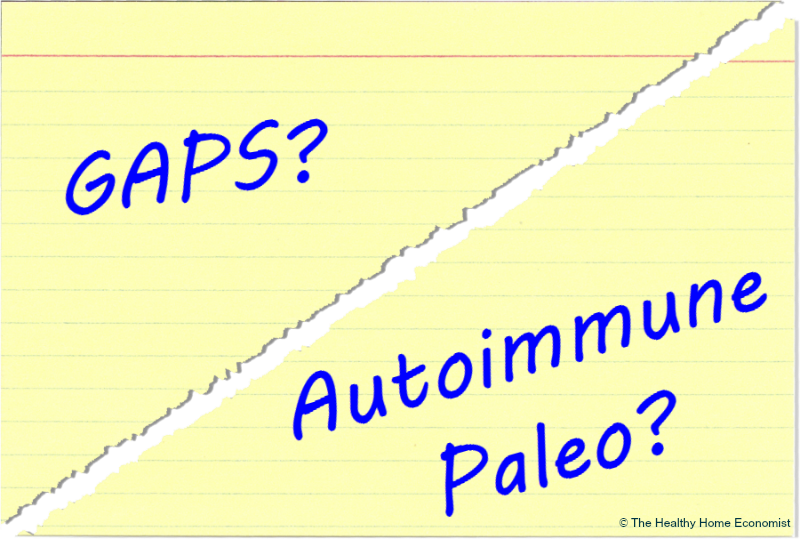 I’ve been receiving numerous emails and queries within my community recently about the GAPS Diet versus Autoimmune Paleo (AIP) for reversing autoimmune disease.

It is exciting that more and more people are choosing to take responsibility for their health by seeking a dietary approach to heal and seal the gut in order to put autoimmune issues of all kinds into remission!

It is also very encouraging to have multiple healing diets like GAPS and AIP available for people to choose from in order to architect an approach to wellness that best suits each person’s budget and lifestyle.

In order to clear up some of the confusion between these two healing diets for reversing autoimmune disease, GAPS and Autoimmune Paleo, I’ve asked Melanie Christner, NTP of Honest Body to outline the two diets at their most basic level and discuss the primary differences between the two.

It is important to remember that GAPS and AIP are both healing diets, meaning they are *temporary* and not designed as a lifelong endeavor. In other words, the ultimate goal of GAPS and AIP is to heal, put autoimmune disease in remission, and resume normal eating within the context of the Traditional Diet that makes the most sense for each individual.

With that, let’s launch into a more detailed discussion of the GAPS Protocol and Autoimmune Paleo. Take it away, Melanie!

What is the GAPS Diet?

GAPS stands for Gut And Psychology Syndrome. It makes a connection between the health of the digestive tract (permeability, balance of microbes, inflammation, etc.) and the health of the nervous system and the rest of the body. GAPS was developed by Dr. Natasha Campbell-McBride, a medical doctor and neurologist, with a master’s in nutrition.  She outlines the diet in detail in her book Gut and Psychology Syndrome.

GAPS is a three-part protocol which includes:

The dietary component of GAPS is based on the 100-year-old Specific Carbohydrate Diet diet (SCD), a proven diet that was developed to help autistic children. The GAPS diet focuses on healing and sealing the gut lining by removing all food stressors for an extended time, and treating with foods like therapeutic bone broth, as well as helping the gut flora rebalance with fermented foods and probiotics.

Supplementation is not heavy, but important. Detoxification therapies include juicing, and detox baths. Practices like saunas and enemas are encouraged.

Typically one who is serious about the GAPS Protocol goes through the 6 stage Introduction Diet first (usually 3 – 4 weeks) and then moves on to the Full GAPS Diet for 18 months to 2 years. This allows the body to gradually and safely rebalance and replenish nutrient stores while at the same time detoxifying and repairing the damage.

What is the Autoimmune Paleo Diet (AIP)?

AIP stands for the Autoimmune Paleo Diet. In its basic form, it is an elimination diet that has a permanent component based on Paleo or Primal eating. The goal of the AIP is to eliminate foods that cause inflammation and dampen the autoimmune response of the body attacking its own tissues.

AIP was originally developed by Loren Cordain PhD. Sarah Ballantyne PhD was attracted to AIP through her research and has now become a leading expert in Paleo Autoimmune issues.  The diet is discussed in her book, The Paleo Approach: Reverse Autoimmune Disease and Heal Your Body.

Foods that are out permanently during and after Autoimmune Paleo include:

There is a strict 30 Day elimination period on Autoimmune Paleo that eliminates and then reintroduces (as the body allows without symptoms returning) the following:

How are GAPS and Autoimmune Paleo Similar?

Both diets start with an elimination component and require that you listen to your body for cues as you slowly reintroduce foods that are allowed on the “full” list.

Both can be mishandled, meaning it is possible to not eat enough of the healing foods (fermented foods, bone broth, organ meats, seafood and lots of vegetables) and focus too much on “approved” baked goods, fruit, etc.

Both place an emphasis on working with diet first, before looking deeper into issues that may need targeted supplementation.

Both eliminate nuts and seeds in the introductory stages, but GAPS introduces egg yolks early on (if tolerated) and nut/seed butter in later Intro stages

Both have practitioners who have trained to be specialized in their respective implementation. (And both have related blogs with great recipes & information!)

How are GAPS and Autoimmune Paleo Different?

GAPS has six stages to its Introductory diet. Stage 1 starts with a diet that is suitable for the most compromised digestive systems and those suffering from diarrhea.

GAPS was developed by Dr. Natasha Campbell-McBride, a medical doctor and neurologist, with a master’s in nutrition.

AIP was originally developed by scientist, Loren Cordain PhD. Sarah Ballantyne PhD was attracted to AIP through her research and has now become a leading advocate of Autoimmune Paleo.

——————————————————————————————————————
GAPS eliminates certain methods of food preparation on the Intro diet. In order for gut healing to take place, raw fibrous foods (which can exacerbate a compromised digestive tract) are out, but raw fermented vegetable juice is introduced in tiny amounts from the beginning.

AIP eliminates all nuts, seeds & nightshades for the duration of 30 Days.
—-————————————————————————————————————
GAPS is meant to be a protocol followed for 18 – 24 months, followed by a careful reintroduction of new potatoes, and then soaked rice and fermented grains (like sourdough) are slowly incorporated. This is of course bio-individual and best attempted under the care of a GAPS Certified Practitioner who can ensure steady progress with no backsliding into autoimmune symptoms.

So, Which is Better?  GAPS or AIP?

The good news: Both AIP & GAPS are full of nourishing, real foods.  This fact alone means that much improvement can be gained from either approach.

On the other hand, GAPS was developed by a medical doctor with a Master’s in Nutrition who has years of hands-on clinical experience dealing with autoimmune compromised patients which adds much credibility to this approach.  I will admit to a personal and professional preference for the GAPS Diet as this is the protocol that brought a lot of healing to my own family.

Moreover, the GAPS Protocol offers additional aspects that I believe to be vitally important to recovery from autoimmune disease.  GAPS also offers an effective process for reintroducing grains into the diet once the gut is healed, something many people feel is important not only to overall food enjoyment and satisfaction but also to the maintenance of a realistic and affordable food budget over the long term.

I would love to hear your thoughts and experiences with either the AIP or the GAPS Protocol. Real, nourishing food, made with love, is always a good thing!

Have you ever undertaken either GAPS or Autoimmune Paleo? If so, what were your experiences and observations?

Melanie Fielstra is a Nutritional Therapy Practitioner, Certified GAPS Practitioner, and Mom of four. She is the creator of Honest Body and hosts an online GAPS class several times a year. Melanie delights in helping people apply healing protocols to everyday life and becoming friends with their bodies again.