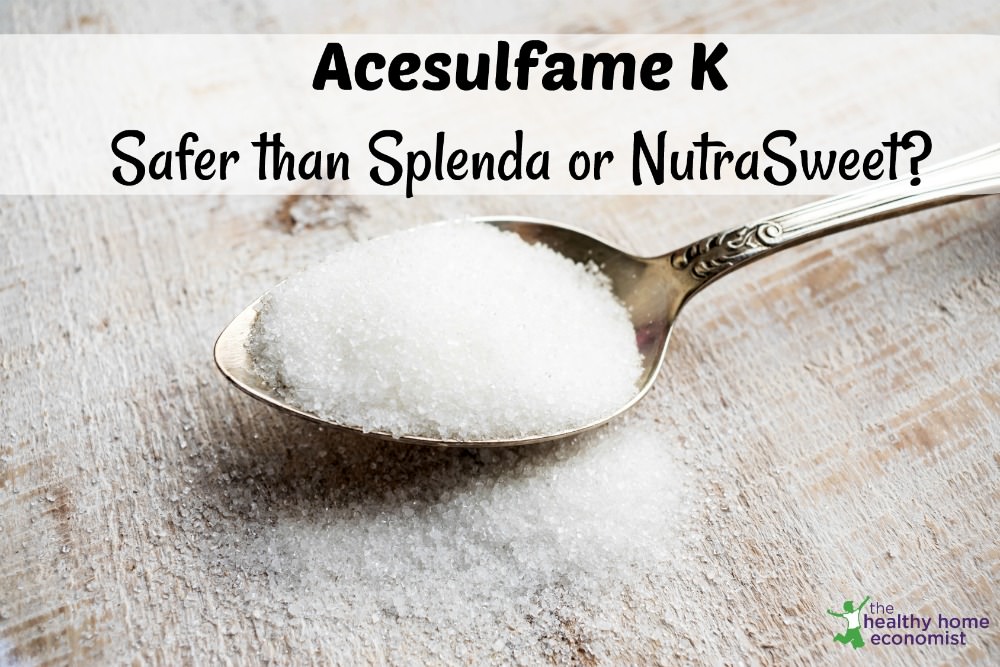 Acesulfame potassium or Ace K for short is a very popular sugar substitute in the European Union.

It is starting to catch on in the United States as well. This is concerning because most Americans don’t know much about it yet, but the name itself sounds sort of healthy. We all could use more potassium, right?

That lack of information is just the way food manufacturers like it. An uninformed shopper is Big Food’s favorite customer, which is why they play cat and mouse with label ingredients, churning out a new ingredient as soon as consumers figure out the problems with an old one. This strategy works to tame most consumers into a state of confused submission.

As ever more scientific evidence piles up about the health-destroying effects of sugar, the corresponding demand for substitutes increases. Just for grins, take a guess about how much the average American consumes in the way of sugar each week? Half a pound, maybe a pound? Not even close!

According to the Department of Health and Human Services (DHHS),

Today, the average American consumes almost 152 pounds of sugar in one year. This is equal to 3 pounds (or 6 cups) of sugar consumed in one week! Nutritionists suggest that Americans should get only 10% of their calories from sugar. This equals 13.3 teaspoons of sugar per day (based on 2,000 calories per day). (1)

With the average person consuming this much sugar, it is easy to see why so many are desperately trying to break their sugar addiction. This is where the boom in artificial sweeteners comes in.

Artificial sweeteners are compounds that taste sweet to the human tongue but are not generally found in nature. Scientists discovered the first artificial sweetener called saccharine over one hundred years ago. It is an interesting tale that continues today, as the FDA alternately has allowed and banned it in foods over the course of many decades. (2)

Even with a host of already available artificial sweeteners, the industry continues to search for and churn out new options. One of the newer ones is acesulfame potassium.

What is Acesulfame Potassium?

Similar to saccharin, acesulfame K has a bitter aftertaste, so food manufacturers often use other chemicals and compounds to try to mask it in products that contain it.

Like so many artificial sweeteners, acesulfame K was found by accident. The chemist happened to dip his fingers into the solutions he was working with, and then touch his lips. Reminds me of how we probably first made cheese and kombucha and so many other things over the millennia. The only difference? You would never find these chemicals outside a laboratory.

Sunnet and Sweet One are two of the best-known brand names for this zero-calorie sweetener joining the ranks of sucralose (Splenda), and aspartame (Nutrasweet and Equal).

Is Ace K a Safe Option?

While the FDA legalized artificial sweeteners like Ace K on the premise that they would help people curb their sweet tooth, the reality hasn’t worked out that way.

In 1800, the average American consumed around 18 pounds of sugar per year. By 1900, it had more than tripled, and today, you can hardly find a loaf of bread or almost any other store-bought food that doesn’t contain added sugar. (3, 4)

Roughly half of Americans consume half a pound of sugar per day! Artificial sweeteners, though, haven’t been left in the dust! Instead of replacing sugar, their consumption has also skyrocketed.

For adults, in just over a decade, they increased their intake by over 50%. The numbers for kids are much higher – an over 200% increase in artificial sweetener consumption from around 2000 to 2013! (5)

While the artificial sweetener industry is celebrating stellar market growth and profits, the research points to real reasons for concern. Especially for children, studies suggest a link between low-calorie sweeteners and obesity, diabetes and other health issues. (6)

One problem with many artificial sweeteners is how, when, and what they break down into. For instance, acesulfame potassium breaks down into acetoacetamide. Conveniently, as of this writing, there is little to no information about the toxicity of acetoacetamide. A safety data sheet on this chemical says that “The toxicological properties have not been fully investigated.” (7)

Few if any studies are available testing the adverse impact of exposing people, especially young kids, to multiple artificial sweeteners at the same time.

How they interact with each other and within the human body isn’t well known nor understood, but many studies point to possible, significant problems.

Many studies on artificial sweeteners have an unsurprising, not too sweet surprise.

Research funded by the sugar industry produces far more favorable results and conclusions than those sponsored and conducted by independent groups or competing industries. (8)

Unbiased science is hard to come by when it comes to sugar and sugar substitutes!

So, what do some of the independent studies of Ace K say?

This is a common theme with alternative sweeteners. For example, xylitol and other sugar alcohols are potential gut disruptors too.

Another concern is that in order to make acesulfame potassium, manufacturers use methylene chloride, a mutagenic industrial solvent with well-known dangers. It is so toxic that some countries have already banned it in anticipation of its likely carcinogenicity. The EPA has recently proposed limiting its use in the United States.  (10, 11)

Does the final artificial sweetener contain traces of this or other chemicals used in the manufacturing process? It is unclear if it does and if so how much. (12)

Either way, it is a reminder that these artificial sweeteners are …. synthetic!

While the FDA and similar international organizations generally say that artificial sweeteners are safe, independent agencies like the Center for Science in the Public Interest point out constantly that there is no real testing on their safety.

Thus, whether you choose to use them or not basically comes down to a question of “Who do you trust?”

A study had this to say about the FDA’s lax approach to testing and approval of acesulfame K.

The 1970s tests of acesulfame—two tests carried out in rats and one in mice—are inadequate to establish lack of potential carcinogenicity. Here are a few reasons why the tests are inadequate [Center for Science in the Public Interest (CSPI) 1996]:

Subchronic tests were not conducted for the rats and mice used in the tests on which the FAPs rested.
It is likely the minimum toxic dose/maximum tolerated dose (MTD) was not achieved in the rat and mouse studies. Randomization of test groups was not carried out properly.

Mice were held on test for only 80 weeks, rather than the 104 weeks characteristic of National Toxicology Program (NTP) bioassays.

Animal husbandry and monitoring of animals on test were evidently poor, as indicated by high disease rates in the animals and extensive autolysis of tissues.

Even with the flaws in design and execution of the Hoechst tests, results indicated an association between treatment with acesulfame and carcinogenesis (CSPI 1996).

Working-level staff members at the FDA identified deficiencies in the acesulfame tests in the 1980s (McLaughlin 1986; Taylor 1986).

Thus, an FDA staff member (Taylor 1986) noted in 1986, when the FDA had decided to accept the Hoechst studies, that the question remains whether these studies are sufficiently definitive or rigorous in light of the potential for widespread, [sic] high exposure to acesulfame K in all group [sic] in the population. (13)

Acesulfame K During Pregnancy and Breastfeeding

The use of alternative sweeteners during pregnancy and breastfeeding is not advised based on the latest research published in the peer-reviewed journal Frontiers in Microbiology.

Both acesulfame K and sucralose were found to potentially affect a baby’s metabolism and the gut microbiome in a negative way.

Ace K. Your Sweet Ace in the Hole?

While the FDA and others may say artificial sweeteners such as acesulfame are safe, it is clear they don’t have any solid evidence for making such assertions. Instead, like so much of the modern food and industrial AG systems, they are willing to roll the dice with a billion+ people experiment.

Watch out in particular for crafty Ace K marketing. Packaging sometimes says that the product is “kosher” and “semi-natural” leading a consumer to think it is safe. Don’t be fooled. Acesulfame K is a lab experiment and nothing more.

If Ace K is something you feel you need to use due to certain health or weight challenges, try more natural alternatives such as granular or liquid stevia, monk fruit extract or lucuma powder.

*Good brands to investigate include Frontier, Sweetleaf, Julian Bakery, and Navitas among others.

Nature provides plenty of sweet and safe answers to sugar, so there’s no need to use chemicals that have the potential to damage health in the process.