The Healthy Home Economist / Healthy Living / 6 Most Common Gum Additives in Food: Which Ones to Avoid 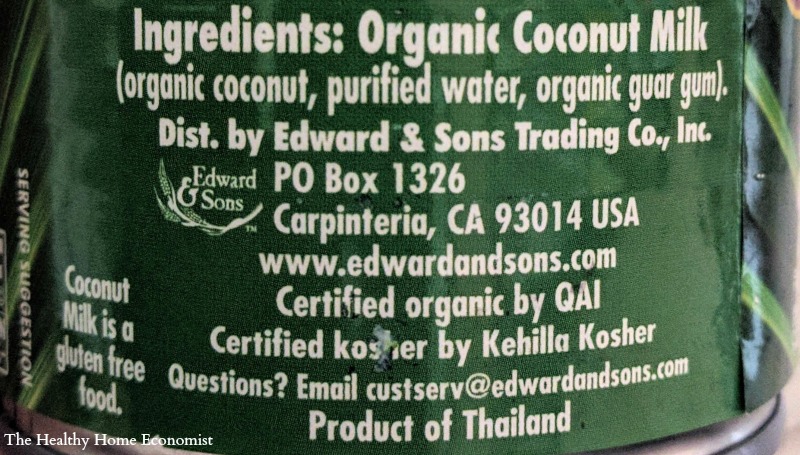 Gum additives are everywhere in our food supply today. Xanthan and guar gum are by far the most common. But there are many others too, such as locust bean gum (carob gum), gellen gum, cellulose gum, and relative newcomer tara gum. The savvy shopper is clued into which gum additives to avoid and which are no big deal.

Food manufacturers love gums because they have unique properties that add desirable texture and/or shelf life to processed foods. Typical use is for thickening, stabilizing or emulsifying. Some are more heat and cold resistant than others. Others are more acid and pH resistant. Most are utilized as powders.

All gum additives appear to exert a possibly powerful influence on the makeup of our gut bacteria. The full extent of this is not fully studied or understood, but another reason these common food ingredients should be treated as small additions to dishes and meals. They are inappropriate for use as supplements or sources of nutrition.

The GAPS and SCD diet prohibit the use of xanthan gum, guar gum or any gum additives for that matter due to the risk of inflaming the gut and the potential for gut flora disruption.

For all of the gums individually discussed below, it is wise to be exceptionally cautious using any for weight loss or other uses. In small amounts, as long as you are not sensitive, none appear of concern except for cellulose gum. But in larger amounts, they can cause bowel obstructions, negative changes to your gut microbiome, and other problems.

One positive about gum additives such as xanthan, guar, locust bean – carob, gellan, and tara is their superiority to the similarly used additive carrageenan. Also commonly used and in a wide variety of processed foods even USDA Organic, carrageenan is a suspected carcinogen that should be avoided as much as possible. It is heavily used in pet food too!

These various gums also appear to be clearly superior to polysorbate 80 and carboxymethyl cellulose (often known as cellulose gum) and other industrial emulsifiers and thickeners.

If you are choosing between one brand that uses carrageenan, cellulose gum, or polysorbate 80 and another brand that uses any of the gum additives below, choose the brand with one of the gums below. It will be of higher quality in most cases.

Xanthan gum is widely used in foods made with gluten-free flours, where it acts as a gluten substitute of sorts by binding the food together. Like most gums, xanthan’s power comes from its ability to increase viscosity and other properties of foods in minute amounts. In most foods, the amount of xanthan gum used would be .5% or less.

Because it is made by bacterial fermentation, the medium used for making xanthan is concerning. Most companies use (GMO) soy, (GMO) corn, wheat, dairy, and other common allergy mediums, but are cagey about revealing to consumers which they are using. This is problematic for consumers with allergies. For example, residual wheat gluten has been discovered in xanthan gum produced using wheat (1).

Bob’s Red Mill is one of a few transparent companies which guarantees the final product to be pure and free from gluten or any other contaminants. If you use xanthan gum, this is a good place to source it.

The main concern with xanthan is that some people experience gastrointestinal issues such as bloating and diarrhea after consuming it. Those with gut imbalance issues and pervasive intestinal symptoms would be wise to limit exposure.

Parents also need to make sure any foods they give to their babies do not contain it. Xanthan gum is clearly dangerous for infants. For example, the New York Times reported adverse events regarding infants who consumed the liquid gel thickener known as Simply Thick. The fact that Simply Thick was widely used in neonatal intensive care units spawned a spate of lawsuits and raised questions about regulatory oversight of food additives for infants (2).

A primary ingredient in Simply Thick is xanthan gum, which the FDA awarded GRAS status (generally recognized as safe). Clearly, the FDA did not thoroughly assess the safety of xanthan gum before bestowing this coveted classification. This should serve as a reminder that just because the FDA considers something safe, doesn’t make it so!

In sum, there isn’t too much reason to be concerned about xanthan except for babies and those with gut imbalance. However, those with allergies to soy, corn, wheat needs to choose their xanthan carefully or avoid it altogether.

If you have the choice, there are better options than xanthan such as guar (discussed below), arrowroot, and kuzu.

The guar bean is a plant that is primarily grown in India and Pakistan. In that area of the world, it is a common, widely consumed vegetable. India alone produces three million tons of guar beans annually. Guar gum is created from these beans.

The popularity of guar gum with the food industry is due to its awesome thickening power. Compared to cornstarch, guar has eight times the thickening potency. It is also an excellent emulsifier accompanied by extreme durability. Unlike some thickeners, guar holds up under freeze and thaw cycles exceptionally well. It can also withstand heat without losing potency (3).

Guar is commonly used in ice creams and coconut milk. It is also popular in gluten-free foods.

Like with xanthan, there appears little reason to be concerned about guar gum, unless you are a sensitive individual. Guar can cause excessive gas and abdominal discomfort in some, with the risk increasing as the amount and frequency consumed increases.

The demand for guar gum has increased of late with a corresponding rise in price. Have you noticed the price of your organic coconut milk going up lately? In some locales, it has nearly doubled over the last couple of years. Other foods containing it are typically more expensive as well. It appears that the much-reviled fracking industry has become enamored of its unique properties and is now one of the main purchasers. Hence, the tremendous competition for limited supply.

In response to the increase in demand, a few new gums are now growing in popularity among manufacturers who do not want to compete with the fracking industry. One of these is tara gum.

Tara is the new gum on the street. As such, there is minimal research and testing regarding its safety. Like guar, it is derived from a legume. But instead of being a common, edible plant, Caesalpinia spinosa is an ornamental shrub from Peru. Tara is now found in many surrounding countries all over South America.

The tara plant’s high tannin content makes it a great option for environmentally friendly tannins to use in the making of automotive and furniture leathers. A wide variety of traditional uses for tara gum survive as well including medicinal, agricultural, and more.

In food applications, tara functions similarly to guar, including holding up under repeated freeze-thaw cycles. Tara gum’s advantages include being odorless and tasteless. Tara is often used in conjunction with xanthan gum or carrageenan. It is recommended to avoid any products that contain the latter.

Tara gum definitely shows great promise as one of the least offending gum additives out there. More research needs to be done before it gets a full thumbs up. All of the animal studies so far have had perfect results with regards to safety, which is very encouraging (4).

Gellen gum is similar to xanthan gum in that bacterial fermentation produces it. Scientists initially identified it as a substitute gelling agent to replace agar for clinical use after its initial discovery in 1978. Today, like other gums, manufacturers use it widely in foods and personal care items as a thickener, emulsifier, and stabilizer.

When mixed with water, gellen is useful to achieve the proper texture in commercial ice cream and sorbet. As one of the most expensive gums, however, food manufacturers do not readily use it as frequently as others covered in this article.

The scientific literature on gellen is promising though not conclusive. A small study published in the journal Food Additives and Contaminants involving 10 people over a 7 day period found no adverse dietary or physiological effects from consuming gellen (5).

In an animal study published in the journal Nutritional Science and Vitaminology, rats fed gellan gum for 4 weeks were studied for changes in gastrointestinal function. Overall, the rats showed weight loss in cecal contents (the large pouch at the beginning of the large intestine). However, the rats experienced weight gain in contents within the colon itself. In addition, transit time through the intestinal tract was shortened with no difference in the surface structure of colonic mucosa (6).

Locust bean gum is a vegetable gum extracted from the seeds of the carob tree. For this reason, carob gum or carob bean gum are other common names. The long pods that grow on the tree are first chopped into pieces to separate the seed from the pulp. Then, acid treatment removes the skins. The skinless seeds are subsequently split and gently crushed. This allows the germ and endosperm to separate via sieving. Once separate, the endosperm is milled once again, this time by a roller which produces the final locust bean gum powder (7).

The flavor of locust bean gum is sweet and similar to chocolate. Thus, it is commonly used to sweeten foods and as a substitute for chocolate. It is also added to pet foods, cosmetics, and infant formula. It is a durable gum and is soluble in hot water without losing potency (8).

Compared to xanthan, locust bean gum is much better tolerated by infants. A study published by the World Journal of Clinical Pediatrics found that infants tolerate carob-bean gum thickened formulas extremely well even those with reflux. The locust bean gum enhanced formula successfully increased the bodyweight of the babies in the study as well. The Journal of Regulatory Toxicology and Pharmacology concluded further that locust bean gum is safe for its intended therapeutic use in full-term infants to treat uncomplicated reflux.

Research into the use of locust bean gum for biopharmaceutical purposes is in progress. Earlier research has already demonstrated promise for the treatment of diabetes mellitus (9).

Examination of the most common gum additives in food today indicates that in general, they are safe for occasional consumption by healthy persons with normal gut function. The exceptions to this are xanthan gum, which infants should not consume. The worst of the lot is cellulose gum. It is best avoided by everyone as it is a chemically treated, ultra-cheap, industrialized product.

Guar gum, tara gum, gellen gum, and locust bean (carob) gum are all safe in small amounts. Tara gum has a perfect safety record in the research so far, although these results are only in animal studies.

Locust bean gum is currently under investigation for pharmaceutical use and is well tolerated even by full-term infants with reflux.

All of the gums listed in this article must be temporarily avoided for those on the GAPS or SCD diets. This is due to unknown long term effects on gut flora and the potential for inflaming a healing gut.