Peanut Oil Compared to Other Fats 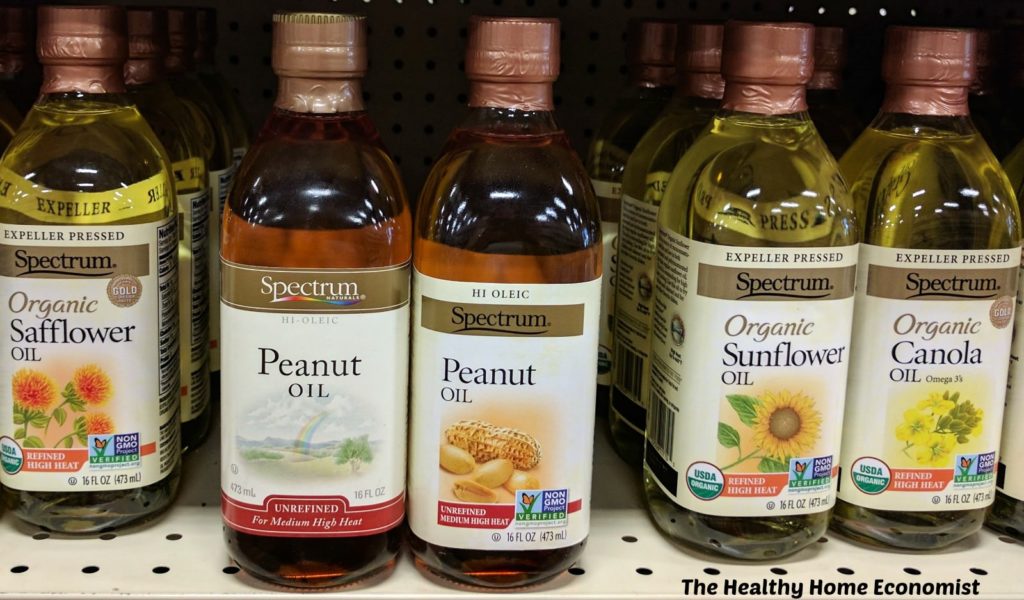 There are several popular restaurant chains that make it a point to tell customers that they use peanut oil for cooking and frying. The Five Guys burger chain and Chick-fil-A are two that quickly come to mind.

Is peanut oil really a healthier choice for cooking, especially when it comes to a fast-food type of joint? Chipotle, for example, uses rice bran oil instead. Before we delve into those issues, let’s take a look at the nutrition and fatty acid profile of peanut oil.

Peanut oil is very mild tasting vegetable fat made from the oily, edible seed. Humans originally cultivated the peanut plant, a legume, in what is today Brazil or Peru at least as far back as 3,500 years ago.

Industrialized processing is not required to extract oil from peanuts. Thus, it is common in many cuisines of South American, African and Asian origin. Unrefined peanut oil is generally for cooking, with roasted versions used for flavoring much like toasted sesame oil.

Around the world, peanut oil is also known as groundnut oil or Arachis oil (after its biological classification Arachis hypogea). In the Deep South, locals sometimes used the term goober oil. Peanuts are commonly called goobers in that part of the United States, with boiled (peanuts) goobers a popular snack.

Historically, humans have used peanut oil for many other purposes besides food. During the Civil War, the Confederacy used peanut oil as an affordable lubricant for locomotives due to a shortage of whale oil. It had the distinct advantage of not gumming up the machinery. Housewives used it as an illuminant for lamps as well as a stand-in for lard during times of scarcity (1).

Examination of the nutritional profile of roasted and unrefined oils from peanuts indicates that it is somewhat similar to olive oil, canola oil, safflower oil and sunflower oil (high oleic). All are high in monounsaturated fats with some important differences for peanut oil.

One of the best features of peanut oil is a high smoke point of 450°F / 232°C. Few unrefined fats are higher with the exception of ghee (485°F/ 252°C  and avocado oil (520°F/ 271°C). The attractively high smoke point makes peanut oil particularly suitable for frying foods.

Several refined oils have as high a smoke point as peanut oil. One of these that is widely used in the restaurant industry is soybean oil. However, the list of nourishing fats does not include highly refined and industrialized oils. As a result, we will exclude these factory fats from the discussion.

The fatty acid breakdown of peanut oil is as follows (2):

Note that there are little to no omega-3 fats in peanut oil. Hence the ratio of omega-6 to omega-3 fatty acids is poor. In addition, there are scarcely any fat-soluble vitamins present unless Vitamin E is added to improve shelf life.

Thus, the primary benefits of peanut oil are due to its resistance to rancidity from heating.

The Problem with Polyunsaturated Linoleic Acid

Peanut oil is not as insanely high in rancidity prone, inflammation and obesity-inducing linoleic acid as grapeseed oil, hemp seed oil or pumpkin seed oil. This is good news.

The bad news is that the amount of omega-6 fats is high enough to be worrisome. It is fully 1/3 of the total oil, gram for gram, which is not a trivial amount. Within the context of the modern diet, this is especially problematic. Most people already consume far too many polyunsaturates on a daily basis.

Hence, consumers should use peanut oil with caution and sparingly if possible.

Certainly, for home cooking efforts, there are much better choices such as grass-fed butter, ghee, tallow, lard, coconut, red palm oil, and avocado oil. These are the only fats in my pantry and refrigerator. All are extremely low in omega-6, polyunsaturated fatty acids (less than 10%). Oil from peanuts contains over three times this amount!

Refined peanut (groundnut) oil, like all processed vegetable oil, is heavily refined, bleached and deodorized. Even when organic, smart consumers avoid refined oils. Processing heavily damages the fragile omega-6 fats resulting in free radicals. Since oil from peanuts is 1/3 polyunsaturate, this is a significant problem.

Unrefined peanut oil, on the other hand, is a much more informed choice. It is considered gourmet quality and can impart a wonderful flavor to dishes.

Notice the color of the unrefined peanut oil in the picture above. It is a rich copper color compared to the bleached and deodorized refined oils on either side of it.

Refining the peanut oil in the picture above would result in a pale yellow color too!

What type of oil do you think restaurants like Chick-fil-A and Five Guys use? Yep, you guessed it – the refined kind.

Choosing to eat at a restaurant that uses peanut oil for cooking is without a doubt a better choice than the typical chain using soybean oil. Not only is the soybean oil used highly refined and of GMO origin (translation: loaded with Roundup residue), it is also nearly twice as high polyunsaturates.

Even though a better choice, there are still concerns with peanut oil for cooking and frying. Consuming these foods regularly is not a good idea. Let’s explore why.

Monounsaturated and saturated fats in peanut oil are stable and don’t oxidize easily when heated. On the other hand, omega-6 polyunsaturated fats most definitely do! This is especially true in restaurants where the oil is heated for long periods of time – hours in fact. Those of you who have worked in the restaurant industry can likely attest to this practice.

In addition, the oil tends to be used several times before replacement with fresh oil. Someone I know who used to work for Chick-fil-A said the peanut oil in his restaurant was used all day long before replacing the following morning. While this may not be standard practice for all locations (hopefully not), you really don’t know what you’re getting when you pull into that drive-through.

Another issue from reused oil is from starchy food bits heated to high temperatures for long periods of time along with the oil. This introduces health risks from carcinogenic acrylamides in addition to the free radicals from the heated oil.

Besides the issue of excessive omega-6 fats, potential mold issues in peanuts and their oil pose a danger to consumers.

Peanuts are particularly prone to mold with toxic species able to develop during storage in warm, humid months. These molds (Aspergillus flavus and Aspergillus parasiticus) produce a substance called aflatoxin that is a known carcinogen. This toxin can end up in oil made from affected peanuts. Thus, for those that are mold sensitive, peanut oil is probably not the best choice. (3)

Despite peanut oil’s reputation as heart-healthy, it is considered atherogenic. This means that consumption promotes the development of fatty plaques in the arteries. How can this be? Peanut oil is low in cholesterol and contains phytosterols that compete with cholesterol for absorption in the digestive system, right? Watch out. This marketing spin is a total red herring!

Peanut oil is naturally high in lectins. These substances are common in legumes, grains, seeds, and nuts. They are powerful anti-nutrients and are irritating to the digestive tract in a manner similar to phytic acid. Soaking peanuts before roasting reduces levels of this anti-nutrient. (4)

The problem is that groundnut oil comes from unsoaked peanuts, meaning the lectins can still be present. Animal studies of peanut oil indicate that the lectins contribute to the hardening of the arteries, otherwise known as atherosclerosis.

Another study discovered that consuming a single handful of roasted peanuts caused intact lectins in the bloodstream within a few hours. Research animals with similar blood lectin levels as identified in that study develop heart disease.

Should You Use Peanut Oil or Eat at Restaurants that Use It?

In conclusion, avoiding peanut oil for home cooking is a wise idea. Far better choices are widely and affordably available that are much lower in inflammatory omega-6 fats without risk from aflatoxins and lectins.

With regard to eating at restaurants that use refined peanut oil, exercise caution. While an occasional meal cooked in refined peanut oil is not going to present an issue for most people, regular consumption of foods fried or cooked in it would not be advisable.

In our neck of the woods, we prefer Burger Monger to Five Guys, and our family never eats at Chick-fil-A (MSG headache waiting to happen). Burger Monger uses traditional beef fat for frying. Beef fat or tallow is a FAR healthier alternative for cooking and frying. When you use it, you don’t have to add MSG to the food to give it a synthetic beef flavor plus you have lower risk from rancid fat.

Did you know that McDonald’s used tallow decades ago for making french fries before it became politically incorrect in the 1980s to do so any longer? This is one big reason why fast food was healthier 30+ years ago than it is today!

My Most Important Food Storage Item