Contamination of rice crops with arsenic is a widespread problem around the world even for farmers following organic methods. There are 4 strategies for sourcing and preparing wisely to avoid this problem if this staple food is to be enjoyed safely. 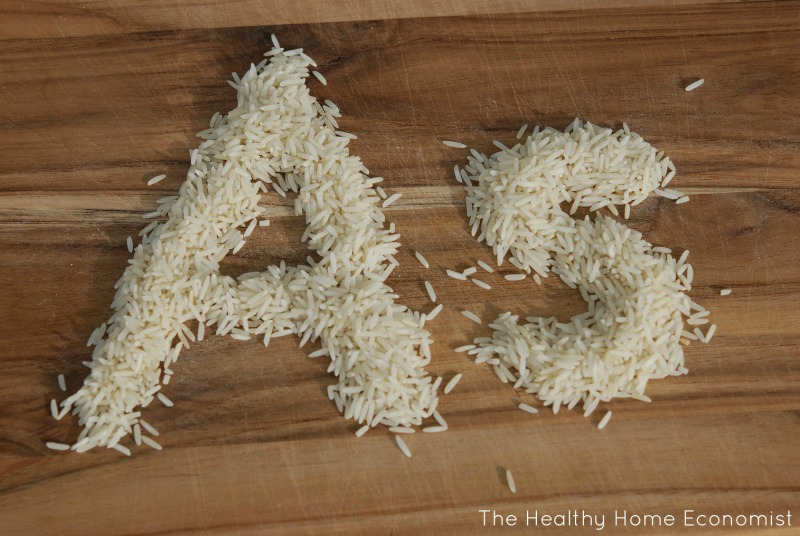 Rice. Comfort food par excellence. What is chicken soup without rice? For those who are gluten-free, rice often becomes an affordable alternative along with oats. It is also attractive to food companies that manufacture dozens of gluten-free foods now available in supermarkets and health food stores.

But rice has a troubling story to tell, and those who wish to eat it without danger to themselves and their families need to know about it. Arsenic, a toxic and highly dangerous chemical element with symbol As has stealthily invaded our food supply. In particular, arsenic in rice and foods containing it have tested at levels capable of triggering symptoms of arsenic poisoning!

How in the world did arsenic end up in our food in the first place, especially in staple food like rice?

Where is arsenic coming from in our food supply?

Arsenic shows up in our food through three main sources.

First, arsenic naturally occurs in the earth’s crust, coming in at the 33rd most abundant substance that makes up the outer layer of the earth we all live upon. It often occurs in higher concentrations with other precious or industrial metals, like gold and tungsten. Thus, a certain amount of exposure is unavoidable and normal. Some areas, though, have naturally elevated and thus problematic base arsenic levels, especially areas known for mining.

Second, factories for some industries release arsenic into the environment. While those industries connected to mining and refining appear to be the largest emitters, they are not alone. The manufacturing of treated lumber including telephone poles and railroad ties uses arsenic. Coal power plants spew arsenic into the air if the pollution isn’t filtered out first. Depending on proximity to these industries, arsenic can end up in its water and soils, and then in the food grown there. (1)

Third, some pesticides and other agricultural chemicals contain arsenic, which builds up over time in soils where they are used. Fortunately, some to most of these are now banned. However, the many years of previous, repeated application means the soil and water tables baseline arsenic levels are far higher than they should be.

The Connection Between Cotton and Arsenic in Rice

In addition, commercial chicken farms used arsenic for a long time as a poultry feed additive. The FDA approved such use until only recently. (2)

More problematic, the type of arsenic often, though not exclusively, used in agricultural (inorganic, meaning it is not bound to carbon but other elements and chemicals), is far more dangerous to human health than the kind that naturally occurs in the earth’s crust.

Arsenic and agriculture, an untold legacy

Certain parts of the country have startlingly high levels of arsenic contamination in the soil and water. California and Texas, two of the primary places rice are grown, rank as some of the worst in the nation.

Be not deceived, however, as arsenic contamination is incredibly widespread and problematic across any modern major agricultural regions. This is especially true for areas that have high concentrations of concentrated animal feeding operations, otherwise known as CAFO poultry production (3).

This results in foods, especially those that tend to uptake more arsenic than others, becoming dangerously high in this contaminant. Rice is one such food.

Unfortunately, arsenic easily contaminates rice crops for two reasons. First, rice appears to have an innate penchant for picking up this chemical element from the soil. By some estimates, rice is ten times more efficient than other plants at arsenic uptake! (4)

The problem includes all varieties including brown, purple, black and red rice.

Sounds a bit like the issue of fluoride contamination in tea, doesn’t it?

Second, farmers almost always grow rice in flooded paddies (although some forward-thinking farmers are developing new ways to avoid this). This growing method exposes rice to far more arsenic than other grain crops since arsenic is highly water-soluble. It is also found in irrigation and other water sources, such as well water around the US. (5)

Lastly, poultry litter (chicken manure mixed with bedding) is a major source of arsenic contamination. For many years, industrial factory farms used arsenic as a growth stimulant for CAFO chickens. The arsenic causes the chickens to eat more, which means they grow faster, which means the big industrial farms make more money.

The problem is the chicken’s poop is laced with lots of arsenic. All that manure is then used to fertilize grain and vegetable fields. Note that this manure can freely be used on ORGANIC grain and vegetable fields (this is known as the manure loophole, a loophole so big in organic standards you can drive a CAFO truck right through it). The arsenic also ends up in groundwater, which people drink and use to irrigate their crops in many regions.

In 2013, the FDA finally banned arsenic as an additive to chicken feed. (6)   Unfortunately, the environmental and human damage from decades of use is already done.

Rice is in EVERYTHING

Because it is easy to grow, like many industrial crops (such as corn and soy), rice is found in far more places than you might expect.

Rice milk. Gluten-free bread. Rice cakes. Rice-based snack treats and crisps. While people often think corn and soy are in everything, especially for gluten or dairy-free folks, rice is often in every substitute and alternative.

Studies show that just a single serving of processed rice foods can exceed the recommended exposure for arsenic in children for an entire week! (7)

This is especially problematic for families with younger children or pregnant moms, who cannot and should not risk increased exposure to this highly dangerous heavy metal.

While white rice compared to brown is lower in mercury and arsenic, it carries its own hidden danger – talc. Yes, white rice and any polished rice may contain large amounts of residual talc. This is because white rice processing uses talc for polishing. Thus, it is wise to thoroughly rinse all rice repeatedly before cooking, even organic white rice!

This eye-opening video shows the process of polishing white rice using talc. Notice the HUGE bag of talc that mixes with the brown rice!

The risks from talc are somewhat debated, but it is known to possibly contain asbestos. While cosmetic grade talc is said to be asbestos-free, I could find no confirmation that talcs used in rice polishing meet some sort of independent, rigorous standard that includes testing for asbestos. Talc has also been linked to ovarian cancer. (8)

Is wild rice a safer alternative to brown or white rice when it comes to arsenic? The answer is yes and no. Unfortunately, there is not a clear cut answer at the present time.

The level of arsenic in wild rice cultivated in the traditional manner is totally dependent on the purity of the body of water where it grows. Some lakes are contaminated and some are not. Wise consumers should check with their supplier and ask about regular water testing and/or testing of the wild rice itself for arsenic. Much of the native wild rice is grown in Canada, where mining operations may have contaminated local bodies of water. Don’t assume your source is safe. Ask and verify.

With paddy grown wild rice, the same issues apply as with brown and white rice. Stick with organic brands and ask the companies you patronize about arsenic testing of cultivation water, soil, and crop.

Strategies for Avoiding Arsenic in Rice

The four strategies below for avoiding arsenic in rice will keep your family safe and still allow you to enjoy this age-old traditional food. There is no need to stop eating rice. You just need to know how to source it safely!

First and foremost, eat only organic rice if at all possible especially if you are gluten-free! While the arsenic in rice that is organically grown may not necessarily be lower, it will have far less of other dangerous, health-damaging chemical residues. Toxicity is frequently cumulative and sometimes synergistic.

Soaking Rice Reduces Arsenic Up to 80%

A second very important step is to soak rice before cooking!

The traditional method of soaking rice is as follows. Mix five or six parts water to one part rice, discard the soaking liquid, rinse the rice thoroughly, and then cook in fresh water. This approach significantly reduces arsenic levels.

Studies show that overnight soaking can remove up to 80% of the arsenic, though more research is needed about how easily different rice varieties give up their arsenic. (9, 10)

The safety of rice water as a home remedy for gastroenteritis is significantly enhanced by taking this precautionary step as well.

Note that while soaking is the best strategy, parboiling rice before cooking also reduces arsenic (though not as much).

Stop buying, eating or feeding your family processed rice or rice containing pseudo-foods. Such foods would include popular items like CHEX cereal, Rice Krispies, rice cakes, and so many others. These foods are loaded with arsenic according to testing by Consumer Reports! (11)

Organic varieties are fine as an occasional treat, though there are many better alternatives made with other gluten-free grains.

Buy Rice from Companies that Test for Arsenic

Some brands of rice regularly test for arsenic. Others don’t. Lundberg Farms is one brand that is very transparent about the problems of arsenic in rice. The company also actively works to protect its customers. The company website addresses the issue directly with a letter from the CEO. In addition, the company publishes arsenic testing results for their crops and has for the past five years. Patronizing these quality brands is a good use of food dollars.

If you simply cannot afford organic, have no time to soak it before cooking or call brands about arsenic in rice testing results, then do this. Eat rice at most 1-2 times weekly, and be sure to stick to a single serving especially for children. Why so strict? Remember the Consumer Reports article above found that a single serving of arsenic-contaminated rice goes over safe limits for a week!

Learn to use other gluten-free grains like oats, buckwheat, teff, amaranth, quinoa, and millet. While these are sometimes harder to find and a bit more expensive, the importance of not becoming overly reliant on rice in the diet is worth the cost.

Detoxing from Arsenic in Rice

Do you suspect that eating too much-contaminated rice and/or gluten-free foods in past years has potentially caused a build-up of arsenic? Exposure to arsenic in rice or any other source is identified via hair analysis performed by a locally respected practitioner. Arsenic binds to keratin in the hair. This simple and inexpensive test (usually less than $100) is a reliable way to find out.

Once arsenic exposure is identified, proper methods for detoxification can be initiated under the care of your physician. 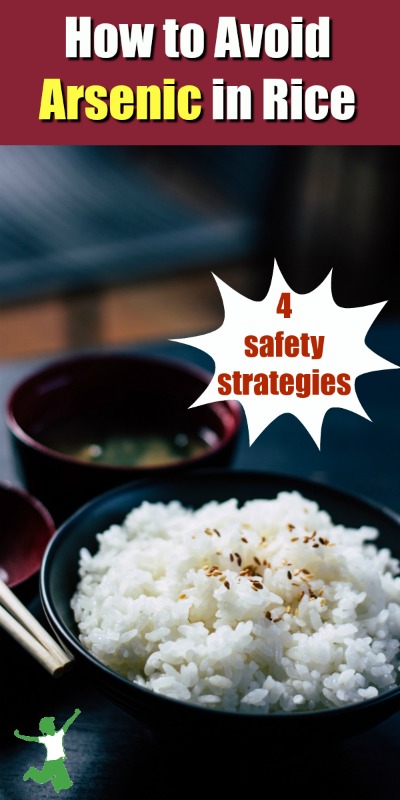