Healthy Home Economist / Archives / Whole Grains and Cereals / Amaranth: How to Get the Most from this Ancient Aztec Superfood! 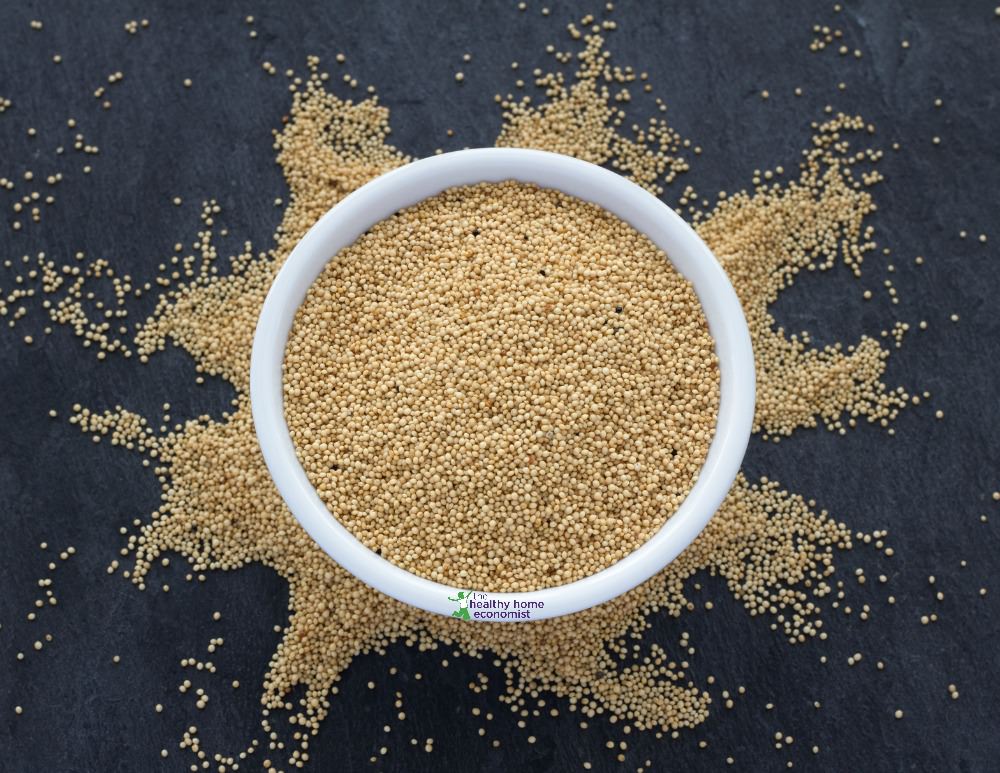 For at least ten thousand years, people have grown and consumed foods made from amaranth. This ancient grain-like seed ground into flour served as a dietary staple for the Aztecs and other healthy ancestral cultures.

The name “amaranth” comes by way of the Greeks, who referred to the plant as the “unfading flower” due to its striking and lovely blooms that retain vibrant color long after drying. While these flowers – often in red, purple, and gold – are a glorious sight, the leaves and stems are no slackers either. They often range from deep red to bright green with purple veins. In addition, the leaves for most species are edible! This is in contrast to the seeds. More on this below.

The Aztecs were heavily dependent on the cultivation of amaranth for survival. Farmers in Peru and many other places in South America continue to grow it to this day.

This ancient grain almost met its end during the Spanish conquests of the New World. Cortes and his compatriots banned the plant and seed, burned it wherever it was found, and punished anyone found to possess it. This strategy apparently attempted to starve competition from native populations.

Fortunately, amaranth survived the Spanish invasion. Natives hid it in isolated areas and regions, often high up in the less populated or rarely visited mountains where the invaders generally feared to go.

Cultivation of the amaranth plant has now gone farther than the Conquistadors themselves could have dreamed. It is found on all the world’s continents that support food production. (1, 2)

The Many Uses of Amaranth

Over fifty species make up the amaranth plant family. Surprisingly, few of these produce edible seeds. Most have nutritious leaves, however, as mentioned previously.

While South America is its native home, farmers who grow edible species there currently make up only a small portion of the planet’s total. Other parts of the world represent the main growing regions, such as China.

In regions that use glyphosate and other herbicides, a new variety of amaranth has emerged – Palmer Amaranth (Amaranthus palmeri). This “superweed” (should you call an edible plant a weed?) is resistant to numerous herbicides, including Roundup, a probable human carcinogen according to the World Health Organization. This causes all sorts of trouble for cotton, soy, and corn, usually of GMO origin.

It would be far wiser if these farmers switched to cultivating amaranth instead of trying to kill it. This strategy would likely prove highly profitable for themselves and far healthier for their families and the environment!

Amaranthus retroflexus, a common and thorny pigweed is found throughout much of the US. It gets its name since it often springs up in places pigs are left to root around too long. It is best to not let this variety go to seed to prevent unwanted spread, but the leaves, particular the young ones, are edible. In some countries, such as China, varieties are grown specifically as forage for pigs. (3)

Amaranth is especially valuable because it grows quickly and produces highly nutritious leaves and seeds. But amaranth is more than just a foodstuff. Amaranth oil contains squalene, a commercially valuable fatty acid. The food industry’s artificial “Red No. 2” accused of triggering hyperactivity in children and identified as a human carcinogen by scientists, is a synthetic knockoff of the original, amaranth derived “Hopi red dye.” (4)

When it comes to nutrition, amaranth is a heavy hitter from both a macronutrient and micronutrient level.

The amaranth grain contains 6 -10% oil found mostly within the germ. The oil is more than two-thirds unsaturated of which nearly half is omega-6 linoleic acid and the remainder omega-9 oleic acid. Amaranth oil does not contain any omega-3 fats.

Due to its relatively high omega-6 content, amaranth is best enjoyed in moderation within the context of a diet containing low to no low processed foods. Omega-6 polyunsaturated fats (usually GMO) are heavily used by Big Food and the restaurant industry. Excessive consumption produces inflammation.

It is important to note that amaranth is high in carbohydrates with 46 grams/serving. Hence, it is not appropriate for the Keto diet. Nor is it recommended for those on gut healing diets such as GAPS, SCD, AIP or other temporary dietary approaches like the 21 Day Bone Broth Diet Plan that exclude or greatly limit carbohydrate consumption. Note that amaranth is allowed in small amounts during the maintenance phase of the bone broth diet.

The Institute of Nutrition of Central America and Panama at Guatemala identified the amino acid profile of amaranth as “among the highest in nutritive quality of vegetable origin and close to those of animal origin products.” (6)

It contains about 30 percent more protein than rice, sorghum, and rye, according to a USDA Forest Service report. As a plant-based source of protein, it is not complete like all animal protein sources are. However, it is very close containing eight of the nine essential amino acids. It is notably high in lysine, which is mostly lacking in corn and wheat. Thus, making a tortilla out of a blend of corn and amaranth flour provides a basic foodstuff that is more nutritionally complete and yet remains culturally accurate and budget-friendly. (7)

Besides high-quality vegetable protein, this ancient superfood offers an uncooked nutritional profile that includes the following vitamins and minerals per 100 grams. (8)

Note the wide number of B vitamins in amaranth, particularly the elusive B6.

In addition to notable vitamin content, the following minerals are also present in amaranth. Biodynamic or organic amaranth grown in nutritious soil would potentially contain an even better mineral profile.

Remember that while only a few of the 50 species of amaranth contain edible seeds, most contain leaves that can be safely consumed. These leaves are also quite nutritious containing high levels of magnesium and calcium, along with Vitamin C and carotenes, which are Vitamin A precursors. (9)

Amaranth isn’t technically a grain but is often identified as one. It is a natural gluten-free choice for those avoiding wheat, rye, and barley. However, to ensure that it is truly gluten-free, always source from a producer that does not handle other gluten-containing foods. This avoids the issue of facility cross-contamination.

Amaranth is more correctly identified as a pseudo-grain like wild rice, quinoa, and buckwheat.

Since it is gluten-free and not technically a grain, celiacs, some paleo folks, and those with gluten issues are turning to amaranth for another nutritious option. In particular, it is a good alternative for reducing rice in the diet which tends to be overconsumed by the gluten-free crowd. This is important due to the well-documented issues of arsenic contamination that occurs by cultivating rice in flooded rice paddies.

Easy to Harvest and Grow

Amaranth is something that is easy to grow small scale. Given its high protein content and excellent nutritional profile, it is something for farmers and those interested in homesteading to consider as a part of their animal feeding program.

Unlike many other feedstuffs, amaranth grows rapidly and produces large amounts of seeds – remember, many species are considered noxious weeds! Also, it is exceptionally drought tolerant, able to go a month or more without rain.

One other reason to consider amaranth is the presence of the amino acid lysine in its protein profile. Lysine is generally lacking or present only in very small amounts for most grains and pseudo-grains. Insufficient lysine can hamper human and animal development, especially people and pigs. Amaranth literally brings sufficient lysine to the table, which is one reason why coupled with the growing list of benefits outlined above, it has enjoyed the title “the grain of the future.” (12)

Amaranth isn’t easy to eat off the shelf, but neither is it overly hard to prepare. It contains a number of anti-nutrients – tannins and soap-like saponins in particular.

Traditional groups developed practices to reduce and remove these harmful compounds. Typically, they involve soaking the seeds, draining off the water and then allowing them to sprout before consuming. Because the soaking water contains these anti-nutrients, it is not wise to consume it as is sometimes practiced under modern food philosophies. An example is aquafaba chickpea water.

A Kenyan study claims that the optimal time and technique to reduce anti-nutrients involves five hours of soaking followed by 24 hours of sprouting. (13)

Cooking will also help eliminate anti-nutrients in amaranth. Both boiling and dry heat break down anti-nutrients, along with increased protein utilization. Note that some people groups practiced both methods, but many traditional dishes use only cooking to degrade the anti-nutrients. Either way, it is best to avoid consuming raw amaranth.

First, remember that amaranth produces edible leaves, similar in taste to spinach. You can consume them raw, stir-fried, or sauteed. Many Asian and African dishes make use of amaranth greens.

Note that some species of amaranth leaves, particularly purple amaranth, are high oxalate foods. Thus, those with candida issues and/or kidney stones in the family tree should avoid eating amaranth greens raw and toss the cooking water before consuming. They are also not a safe choice for green smoothies.

If you need a replacement for popcorn, amaranth seeds can also be popped on the stovetop. This recipe for popped sorghum shows you the process. Unfortunately, a popcorn popper cannot be used as amaranth seeds, though a similar color, are smaller than pearl millet. They are not as tiny as teff grains, but almost! They are smaller even than quinoa!

In Mexico, popped amaranth is a special treat called dulce de alegria, roughly translated joy of sweetness. The amaranth is mixed with sugar or honey after popping.

There are many other ways to prepare it including a cereal-like amaranth breakfast porridge. The seed is easily ground into gluten-free flour that when blended with a binder, make delicious cookies, cakes, and pancakes. Note that you will require a specialty grinder to accomplish this due to the tiny size of the seeds.

Be prepared to use a lot of water when incorporating into dishes. Many recipes recommend a ratio of six cups of water for each one cup of seed! Amaranth releases a great deal of starch into the liquid during cooking.

How do you best enjoy preparing and eating amaranth?