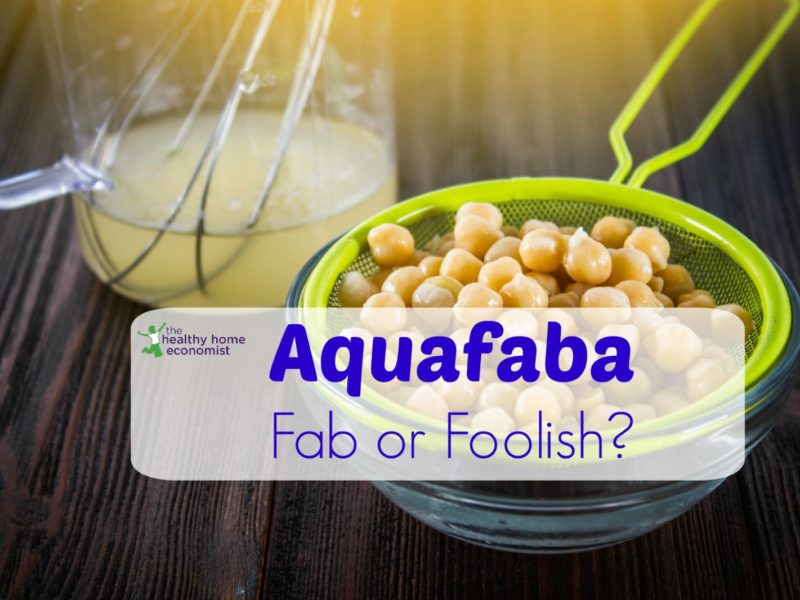 Over the last few years, aquafaba has become all the rage within some alternative cooking circles.

In essence, it is the bean water from canned or cooked chickpeas (garbanzo beans). Sometimes other types of legumes like faba beans are included in the definition as well. Technically speaking, aquafaba is similar to rice water, which has many health benefits. However, while the water from cooking rice is safe to consume, bean water is best avoided.

What is Aquafaba and How is it Used?

The sticky, thickened water from cooking beans has the curious ability to whip up just like egg whites, stiff peaks and all! Thus, it makes an excellent egg replacer for those allergic to eggs or those espousing a vegan diet.

Chickpea water, in particular, is useful for whipping up egg-free desserts from brownies to homemade ice cream. One reader of this blog commented that it works extremely well as nondairy milk for making homebrewed lattes.

Social media groups with thousands of fans regularly share a seemingly endless array of ideas, recipes and other suggestions for using it.

But, should you really be consuming this slimy, gel-like liquid? Is it safe? And more importantly, did traditional cultures use it? Certainly, given their frugality and “waste not, want not” mentality, if cooked bean water was healthy to use, a clear pattern of historical use would prove it, right?

The History of Aquafaba

Aquafaba as food for humanity is very new on the scene. A French tenor named Joël Roessel first considered its use as a foodstuff in 2014 while investigating the possibilities of vegetable-based foams.

Later, a pair of French thrill-seekers independently posted a viral video showing how to make a dessert out of whipped chickpea foam.

After vegan blogs picked up the idea, it migrated to social media forums, and a movement was quickly born.

The name aquafaba is a blend word combining “aqua”, meaning water, and “faba” for faba beans. Goose Wohlt originally coined the term with a community of social media fans adopting it. (1)

Not to be outdone, aquafaba quickly gained the attention of the food industry.

In 2015, the New York condiment company Sir Kensington’s debuted Fabanaise, the first aquafaba-based vegan mayo. $8.5 million in investment funding quickly followed. The product is highly profitable because the cooked chickpea water in the mayo is sourced as a waste product from an upstate hummus company. (2)

Suffice it to say that the science of what constitutes aquafaba is not at all clear at the present time. This is not surprising given that aquafaba didn’t exist as a culinary ingredient prior to 2014.

Only the peer-reviewed publication, the Journal of Visualized Experiments (JoVE) that publishes experimental methods in video format, uses the term as of this writing with research published in February 2018. (3)

Dr. Martin Reaney of the University of Saskatchewan in Canada led a team that found that the foam from canned chickpea aquafaba varies in composition depending on the commercial source. Processing methods are the determining factor such as soaking, cooking and/or dehydration. The pH, temperature, pressure, and duration of these methods affect its makeup as well.

Most alarmingly, Dr. Reaney’s research demonstrated the presence of saponins in aquafaba responsible for its soap-like foaming effect. This confirmed a hunch to that effect prior to testing. These chemicals are dangerous to human health, contributing to the development of leaky gut and potentially a miscarriage risk. More on this with citations below.

If you’ve been intrigued by the buzz about aquafaba and the chorus of some alternative voices who advocate using it, I would strongly advise you to hold back your enthusiasm and avoid jumping on the bandwagon at least for the time being.

Here are 6 reasons to stay cautious and not be an early adopter of this trend.

Canned bean or chickpea water (liquid from any canned food for that matter!) is almost certainly laced with a chemical cocktail of hormone-disrupting substances. The industrialized packaging process involves pouring boiling hot food into cans lined with a thin layer of plastic containing the industrial chemical BPA. This triggers leaching of the chemicals into the water, and to a lesser extent, the food too.

The companies that profess to use BPA-free cans typically use another chemical called BPS, which is just as bad. The risks to your endocrine system from these chemicals are simply not worth it. Stay away!

If you absolutely must use chickpea water, then at least use the water from chickpeas packaged in glass jars.

Bean Water Not a Traditional Food

Evidence which suggests that traditional societies consumed legume cooking water is hard to find. Ancestral diet advocate Dr. Chris Masterjohn recommends drinking the water from soaking legumes for the folate content. (5)  However, I could not find a solid ancestral reason for doing that either.

This piece of wisdom on the matter from the well-respected cookbook Nourishing Traditions:

Traditional societies whose cuisines are based on legumes prepare them with great care. Beans are soaked for long periods before they are cooked. The soaking water is poured off, the beans are rinsed and in the case of chickpeas the skins picked off. As the legumes cook, all foam that rises to the top of the cooking water is carefully skimmed off. Sometimes water is replaced midway during the cooking process. Such care in preparation ensures that legumes will be thoroughly digestible, and all the nutrients they provide well assimilated because such careful preparation neutralizes phytic acid and enzyme inhibitors and breaks down difficult to digest sugars.

It seems that if consuming the soaking or cooking water for beans and other legumes was a good idea, at least one culture would have done it. They certainly wouldn’t have replaced the cooking water halfway through cooking if they thought it was valuable to use as food! Obviously, carefully soaking and then replacing the cooking water indicates they were attempting to get rid of something. That something is anti-nutrients that harm health.

Old cookbooks published prior to the Green Revolution which kicked off around 1930-40 do not advocate using legume cooking water other than suggesting very small amounts for mashing beans. Until some solid anthropological evidence of this practice comes to light, it seems prudent to abstain from this recently popularized method.

So you’ve decided that avoiding canned bean water because of the chemical risks from the packaging is a good idea. What about making aquafaba at home instead?

I’m sorry to tell you that homemade aquafaba is a bad idea too.

The reason is the large, complex sugars called oligosaccharides that are present in abundance in legumes. Humans, in fact, all mammals cannot digest them because they do not produce the enzyme alpha-galactosidase, which is necessary to break them down. No worries, as methane-producing microbes in the colon are happy to break them down for you instead. This makes for potentially embarrassing, smelly encounters with others. Gas, bloating and diarrhea are also common when these substances are eaten. (6)

Soaking and thoroughly cooking legumes have traditionally been the solution to eliminate this problem. However, if you consume the soaking and/or cooking water where the oligosaccharides go when they leave the chickpea, lentil or bean, then the gas prevention strategy is lost. Keep a bottle of Bean-o on hand in that case as it contains the necessary enzyme and will beat the methane microbes to the punch.

Better yet, skip the aquafaba meringues at the office party.

As confirmed by research, the presence of saponins is responsible for the egg white-like foaming effect from whipping chickpea water.

Saponins are a class of chemicals present in legumes in significant amounts. (7, 8, 9). Agave also contains a lot.

Saponins are a toxic steroid derivative that disrupts red blood cells. They should be avoided during pregnancy as consumption can induce a miscarriage by stimulating uterine blood flow. They also contribute to the development of leaky gut over time by damaging the gut wall.

Does eating aquafaba once or twice damage the gut? Probably not. But using it as your primary egg replacement for months or years is a risky move!

Saponins are thermally sensitive and dissolve in water when soaked or blanched causing a detergent-like effect. Notice the picture of the cooking beans on my stove below. Do you want to eat that saponin-loaded foam? Really?? Maybe try whipping the detergent water from washing your clothes for that next batch of egg-free macaroons too.

Note that the quotation from Nourishing Traditions above states that legume-eating traditional cultures carefully skimmed off this foam. Obviously, they knew that this stuff was dangerous since their preparation methods incorporated this step.

Beware of propaganda suggesting that consumption of saponins increases hydration and cellular uptake of water or is otherwise beneficial to health. Eating them has no benefit in the diet whatsoever. Avoiding them is one reason we cook beans and shouldn’t consume the cooking water even if it whips up nice and pretty for making desserts. 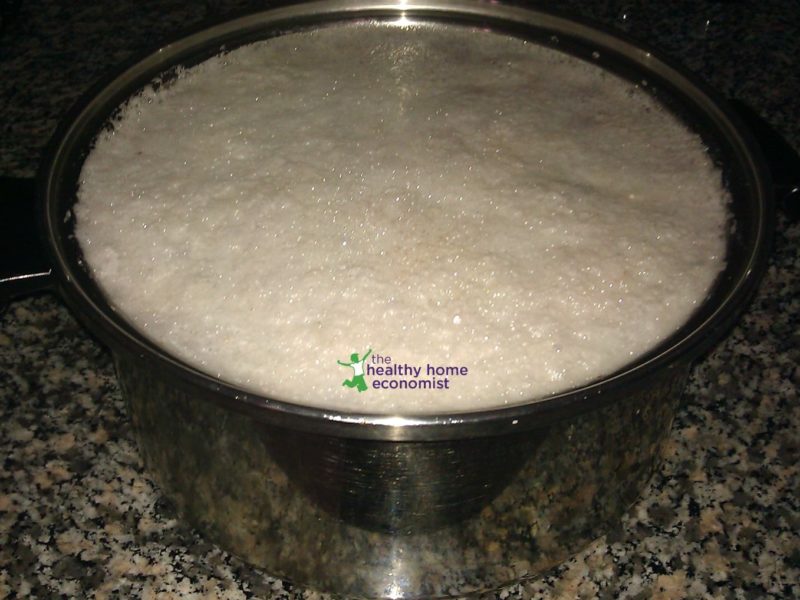 Naming aquafaba after the faba bean, in particular, was clearly a Freudian slip! Faba beans are the most dangerous legume of all that can cause serious health problems in a large swath of the world’s population.

Faba beans, more popularly known as fava beans, are the most dangerous legume in the world, accounting for a serious and potentially life-threatening reaction that 400 million people worldwide are susceptible to.

Consumption can trigger a hemolytic anemia episode known as Favism after the fava (faba) bean. This is due to the most common human enzyme deficiency related response in the world called Glucose-6-phosphate dehydrogenase (G6PD) deficiency. It typically occurs in people of Mediterranean, Southeast Asian, or African descent. It is particularly dangerous in children.

If you are genetically susceptible to the dangers of faba beans, I sure wouldn’t be going and consuming aquafaba made from them either!

Ultimately, the biggest reason to avoid aquafaba is that it doesn’t come close to replacing the nutrition of eggs. Comparing anti-nutrient loaded, detergent-like bean water that few if anyone in history consumed to Nature’s perfect food prized by numerous indigenous societies for its unmatched blend of healthy fats and complete protein is just plain foolish!

My advice to aquafaba fans? Eat your eggs my friends and get them from your own backyard hens, a neighbor, or farmer’s market if you are rightfully concerned about the horrid abuse of birds used to produce commercial eggs. If you are allergic to chicken eggs, try duck eggs or goose eggs which some people tolerate much better.

If you truly need an egg substitute, try this chia seed egg replacement. You won’t get gas from it or damage your intestinal health like with bean water!

I’m going to go collect the gorgeous eggs from my backyard henhouse now!

*The Healthy Home Economist receives no revenue from the meat, egg or dairy industry. Nor does she own stock or have any financial interest in companies supporting these industries. 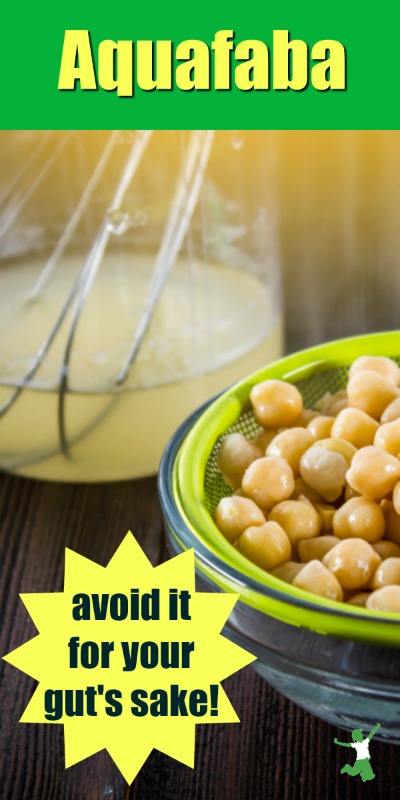 Is Chocolate Safe for Children?