Popped sorghum is a healthy snack traditional to India and a fabulous alternative for those who are allergic to popcorn or just want to mix it up once in a while.

Popcorn is an incredibly popular snack, especially in North America. However, for reasons not yet fully understood, corn allergies are increasing which precludes many people from enjoying a bowl even if the popcorn is organic or an heirloom variety and popped in a healthy fat. This is where popped sorghum comes in!

Considered the traditional grain of India, sorghum actually originated on the African continent many millennia ago.

It’s popularity then spread via ancient trading routes across the Arabian Peninsula into Asia, most notably India and China. In North and South America, sorghum still remains relatively unknown with few people aware of it let alone enjoying its hearty flavor and attractive nutritional profile.

In India, popped sorghum is a favorite snack food. It is prepared similarly to popcorn but requires more TLC because of the tiny size of the sorghum grains which predispose them to burning.

In fact, the first time I tried to make popped sorghum, I burned the whole batch into a blackened mess!

Popped Sorghum Must be Watched While Cooking!

My mistake was that I tried to prepare the popped sorghum in a manner pretty much exactly how I make popcorn. Heat up some oil in a frying pan, throw in a cup or so of popcorn kernels, turn the heat down to medium-high, affix the lid, and set the timer. No watching or stirring of the kernels is required.

In other words, popcorn made on the stovetop doesn’t require much babysitting. Popped sorghum most definitely does!

Once cooked, a bowl of popped sorghum looks remarkably like a bowl of regular popcorn. The pieces are just much smaller. The picture above hopefully gives you some idea.

As a bonus, sorghum grains that don’t pop are completely edible – crunchy, tasty, and not too hard to chew and eat. Feel free to include them in your bowl of popped sorghum so nothing goes to waste. This contrasts with unpopped popcorn kernels. There always seems to be at least a few, right?

Even tiny heirloom popcorn kernels are too hard to eat if they fail to pop and must be left out of the final bowl of popcorn else you risk harming your teeth.

Interestingly, the nutritional profile of a cup of popped sorghum is nearly identical to popcorn.

Per 100 grams, calories, fat, protein, and carbs are virtually the same.

The biggest difference is in the amount of fiber. Popcorn has 13 grams of fiber per 100 grams (1/2 cup) and sorghum has 6 grams. The difference is likely due to the fact that sorghum does not have a hull like popcorn does. So, popped sorghum won’t get caught in your teeth like regular popcorn which is great.

However, heirloom popcorn has a very thin hull that disintegrates when it is popped. This means that heirloom popcorn doesn’t get caught in your teeth either and would have a nutritional profile closer to sorghum than hybrid popcorn varieties.

With regard to minerals, sorghum has 3 times the amount of calcium as popcorn and 50% more iron.

Are you enticed enough to want to try a bowl for yourself? Here’s how to make it!  I’ve also included a short video at the end to show you what the popping sorghum grains look like.

I was surprised to discover that popped sorghum tastes almost exactly like popcorn.  The texture is a bit softer due to the lack of hulls and smaller size but that’s it as far as I can describe. Those of you who love popcorn but can’t eat it for whatever reason will be delighted to have found an alternative at last that won’t disappoint!

How to Make Sorghum Popcorn

Making popped sorghum is as easy as making regular popcorn!

The 20-second video included with the recipe shows you what the small sorghum grains look like as they are popping in a pan on the stovetop. Always remember to keep stirring them until the popping slows down, or else they will probably burn like happened with the first batch I made. 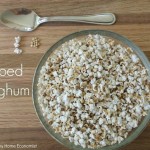 Substitute ghee for the coconut oil if you prefer. This article plus video shows you how to make ghee which is more affordable than buying in many cases.

*Note that a popcorn popper will not work as the sorghum grains are too small. Also, a microwave is not recommended (explanation below).

You can definitely pop sorghum in the microwave instead of the stovetop, but I don’t recommend it as I’m not a fan of microwaves because of the unhealthy levels of radiation exposure. If you have no other option, however, here’s how to do it:

As mentioned above, using a popcorn popper won’t work for making popped sorghum. The grains are just too small!