The history, benefits and uses of buckwheat traditionally and today with its resurgence in popularity as a highly nutritious gluten and grain-free option to wheat and other cereals. 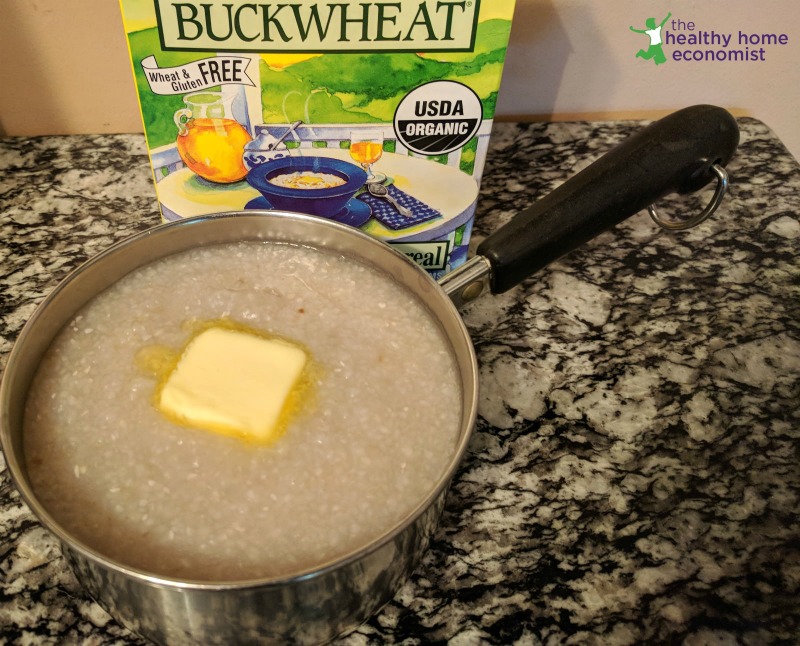 Buckwheat is one of my favorite plants. For gardeners, it produces beautiful flowers that attract bees galore! Cultivation also serves as a valuable cover crop for protecting and improving soil. As icing on the cake, it provides a nutrient dense, gluten and grain free food option for people, poultry and other livestock.

Is Buckwheat a Type of Wheat?

While most people consider buckwheat a cereal grain, technically it is a pseudo-cereal, neither grain nor cereal nor grass. Thus, while grain-like, buckwheat is not actually a grain. Consequently, its English name is quite misleading as it isn’t related to wheat or foodstuffs made with it like bulgur at all!

The edible part of the plant are the seeds that come from the flowers. Its closest relatives are the perennial herb sorrel as well as rhubarb and knotweed.

Buckwheat has a long history of traditional use both in the United States and abroad. Indeed, it is one of the oldest crops still popularly cultivated today with use dating back many thousands of years. As such, it played a large role in traditional diets and cuisines around the world. More on that below.

First cultivation is thought to have occurred around 6000 BCE in Southeast Asia. It then spread to Central Asia and Tibet, and from that point onward to the Middle East, Europe, and finally the New World.

The earliest documentary evidence of buckwheat in Europe is from 1394 in the Netherlands. According to the contemporary Italian botanist Valerio Giacomini, three possible routes brought buckwheat to the European continent. (1)

In short, buckwheat has played an essential role in nourishing the populations of Europe for many centuries!

Many people are familiar with Kasha, or roasted buckwheat. But traditionally, buckwheat was used in an array of dishes and across so many nations and locations as to provide almost a limitless set of cooking options.

In Japanese cuisine, buckwheat is the traditional backbone of Soba noodles, although today they are usually commercially made with conventional wheat or a blend.

Across the world and history, buckwheat has left its mark on mealtimes everywhere!

Most people today are less familiar with buckwheat as a food because of the advent of industrial agriculture and synthetic nitrogen fertilizer in the 19th century. This resulted in a massive decline in buckwheat cultivation in favor of conventional wheat, corn and soy. This harmed both the environment as well as people’s health!

But with the return of interest in ancient grains and grain free eating in the early 2000s, buckwheat is making a strong comeback.

Buckwheat isn’t just for grub! It has many benefits for both garden and homestead in general.

If you haven’t tried cultivating buckwheat in your home garden before, it is time to give it a try! As mentioned earlier, it makes a great cover crop for improving soil quality. A big plus is that it helps cycle vital phosphorous, one of the big three nutrients plants need to thrive.

Also, unlike a lot of other plants that seem to require chemicals to flourish, buckwheat grows well on its own with little assistance from humans. It also will attract a lot of bees to pollinate the other plants in the garden.

High in Phytase and Oxalates

Buckwheat is one of a handful of foods that is exceptionally high in phytase. This is the enzyme that breaks down that pesky phytic acid which protects grains, nuts, legumes and seeds from spoilage and sprouting until the proper time. Consumption of phytic acid blocks absorption of minerals in the food and can also cause gastric distress in sensitive individuals.

Thus, a simple soak of buckwheat before cooking or baking easily neutralizes anti-nutrients. Some people even like to add a bit of buckwheat flour to other soaking grains that are low in phytase to facilitate the process.

Buckwheat groats are also high in oxalates. While natural, these substances can build up in the body for some people causing formation of kidney stones.

Buckwheat is loaded with minerals like few other plant foods. It also contains the two important flavonoids, rutin and quercetin, substances found in the plant’s pigments that are important to human health. In addition, buckwheat’s protein is high quality (though not complete from a human health perspective), containing all eight essential amino acids.

Just how good? Try 34% manganese, 28% copper, 20% iron, 20% B-6, and 20% phosphorous required on a daily basis. Magnesium per 1 cup provides 392.7 mg or 98% of daily value. Since many people are dangerously deficient in magnesium, a simple bowl of breakfast buckwheat porridge would be a good way to remedy the problem (along with regular epsom salt baths). See the easy recipe below!

The nutritional powerhouse that is buckwheat reminds me of lentils and wild rice, other plant foods that could rightly wear the label “nutrient dense”. (4)

Note, buckwheat is also low in calories for just how much nutrition it provides. As Weston A. Price pointed out, this matters not because we worry about restricting calories, but because we need to get enough nutrients in the limited calories we have available to consume each day.

These limited calories are generous on protein. Each cup contains 23 grams. Even better, the protein in buckwheat provides all eight amino acids. Caveat: the amounts of these amino acids isn’t complete from a human health perspective. In other words, you couldn’t eat just buckwheat as your only source of protein and thrive like you could with a single source of truly complete animal protein. Still, when it comes to plant protein, buckwheat is one of the very best.

It isn’t just buckwheat’s excellent nutrition that should catch our eye. Buckwheat is a heavy hitter in other areas as well, especially its flavonoid content.

Indeed, all of this is why many studies point to buckwheat’s role in promoting human (and animal!) health. Studies have linked it to better cholesterol numbers – lowering LDL and raising HDL  – while optimizing total cholesterol and improving LDL/HDL ratio. Studies have linked it to a wide variety of health benefits, especially for our eyes and cardiovascular system (no surprise there given how much magnesium it contains).

Gluten free, Grain Free and PALEO (but not SCD/GAPS friendly)

For gluten free folks, buckwheat is another way to diversity beyond quinoa, oats, amaranth, rice, teff and other gluten free flour and whole grain options. It is also desirable for Paleo eaters who wish to enjoy a grain-like food that has more flavor and versatility than high starch options such as arrowroot and manioc.

Also, as mentioned above, buckwheat is legitimately nutrient-rich and if organic, a very clean option. This compares with organic rice, which still carries the risk of arsenic as do many other gluten free foods. (5)

While even Paleo people can enjoy buckwheat, those on GAPS, SCD, or other carb-restricted and gut-healing diets should not due to its starch content. For GAPS, after a couple of years of gut healing, traditional foods like buckwheat are reintroduced and usually tolerated well.

If you like to sew, making a homemade buckwheat pillow is a beautiful and much more comfortable alternative to hot water bottles or heating pads for soothing back pain, keeping warm when feverish or a myriad of other uses. Simply pick a pattern and sturdy fabric and sew all but an inch or two at the top. Fill with buckwheat hulls and sew up the remainder.

To use, heat the buckwheat pillow in the microwave with a small glass of water for about a minute to warm it up. Make sure you never heat it up without the glass of water! Repeat as needed. You can open up the pillow and change out with replacement hulls as needed when the heat retention ability wanes.

Buckwheat in the Kitchen

One of the most common ways to consume nutritious buckwheat is added to oatmeal recipes. For every cup of oatmeal, substitute a half to one tablespoon of buckwheat flour. Using freshly ground is best, as store-bought buckwheat flour tends to be stale and even bitter.

This doesn’t overly alter the flavor but improves the nutritional profile immensely if you are soaking oatmeal overnight. Adding a small amount of buckwheat flour helps to neutralize phytic acid more effectively than soaking oatmeal alone. If you like the taste of this traditional food, feel free to substitute even more, and find a balance that you and your family enjoy.

Buckwheat and oats go particularly well together in baking. This recipe for gluten free carrot cake uses a blend of the two flours to produce a confection that tastes just like wheat.

On cold mornings, a hot bowl of cream of buckwheat porridge really hits the spot. If you are grain-free, it makes a delicious alternative that is reminiscent in taste and texture to cream of wheat or cream of rice. Try it and see for yourself!