Roundup: Quick Death for Weeds, Slow and Painful Death for You 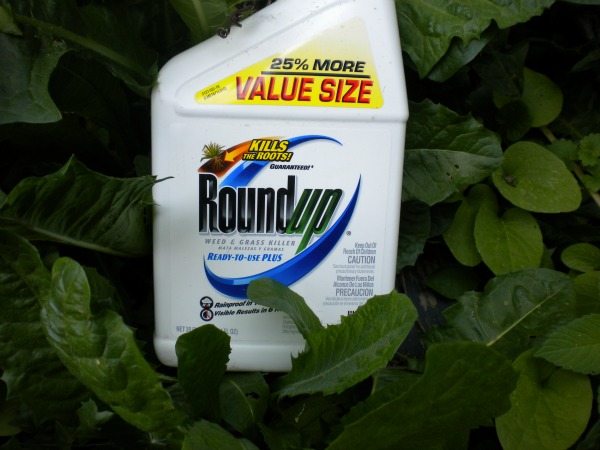 You’ve seen the commercials. All American Dad, pump sprayer in hand, attacking those pesky weeds growing in the cracks of his family’s driveway with a vengeance. He chooses Roundup, of course.

Why?  Because Roundup kills weeds to the root so they won’t come back making you the laughingstock of your suburban neighborhood.

Roundup, Roundup everywhere. Most homeowners use it without a second thought. Many schools even use it, blithely spraying around planting beds and sidewalks where children walk and play, tracking its residues into classrooms, cars, homes and little bodies.

Roundup is indisputably the King of Herbicides and one of Monsanto’s most lucrative crown jewels. Not only is it widely used by consumers, it is also heavily used by industrial agriculture – more popular than any other herbicide worldwide. Its residues are found on the staple crops of the Western diet – sugar, corn, soy and wheat – and in the plethora of processed foods made with these foods as well.  In particular, GMO corn and soy are heavily doused in Roundup as these crops are genetically engineered to be immune to its withering effects.

While the pesticide industry maintains that glyphosate is minimally toxic to humans, new research published in the Journal Entropy strongly argues otherwise by shedding light on exactly how glyphosate disrupts mammalian physiology.

In the in-depth video interview below on her groundbreaking research, Dr. Seneff describes the mechanism by which the glyphosate in Roundup disrupts human biological processes.

What has been completely overlooked until now is that the shikimate pathway is present in beneficial gut bacteria, which play a critical role in human health. Gut bacteria aid digestion, prevent permeability of the gastrointestinal tract, synthesize vitamins and provide the foundation for robust immunity.

In synergy with disruption of the biosynthesis of important amino acids via the shikimate pathway, glyphosate inhibits the cytochrome P450 (CYP) enzymes produced by the gut microbiome. CYP enzymes are critical to human biology because they detoxify the multitude of foreign chemical compounds, xenobiotics, that we are exposed to in our modern environment today.

As a result, humans exposed to glyphosate through the use of Roundup in their community or through the ingestion of its residues on industrialized food products become even more vulnerable to the damaging effects of other chemicals and environmental toxins they encounter!

What’s worse is that the negative impact of glyphosate exposure is slow and insidious over months and years as inflammation gradually gains a foothold in the cellular systems of the body.

The consequences of this systemic inflammation are most of the diseases and conditions associated with the Western lifestyle:

In summary, Dr. Seneff’s study of Roundup’s ghastly glyphosate uncovers the manner in which this lethal environmental toxin gradually and inevitably disrupts homeostasis in the human body with the tragic end result of disease, degeneration, and widespread suffering.

Still want to “shoot” those weeds this weekend with some Roundup and buy those unlabeled, GMO laced processed foods in the pretty packages at the supermarket?

In addition, Roundup residue in organic hydroponics is possible as there is no transition period from conventional farming. Stick with soil based organics!

How to Assemble a Safe, Waterproof Chicken Coop for ≈ $100

How to Break Broodiness in Your Hen

How Green is Your College?