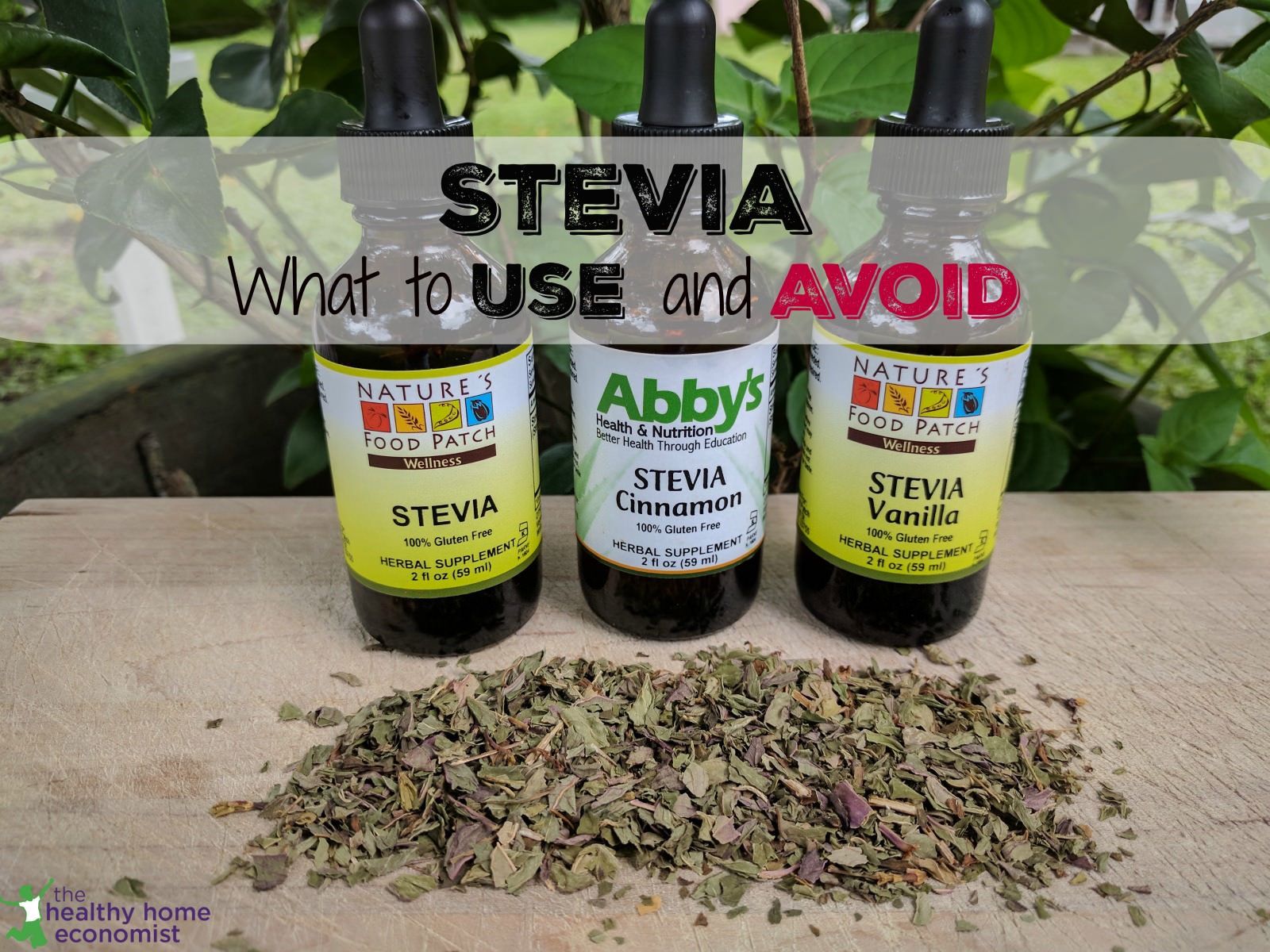 In the increasingly wide and (sometimes) wonderful world of sugar substitutes, what about stevia? Food manufacturers market this naturally sweet herb turned industrialized darling in many forms.

Healthfood store shelves have it on offer as green stevia leaf, white stevia powder, stevia extract, and by far the most popular, liquid stevia available in a dozen or so flavors to suit any palate’s sweet desires.

Sugar. Modern day scourge, yet secretly embraced. Americans have a love/hate affair with all things sweet, simultaneously decrying it yet adding it to almost every possible food. This sugar saturation is causing many to seek alternatives that give them the sweet without the calories. Diabetics seek it to enjoy sweetness without the insulin spike. By far, the most widely accepted as natural and healthy are extracts from the leaves of the stevia plant.

How Much Sugar Does Stevia Replace?

For those seeking to reduce their sugar intake, stevia has a significant advantage other many alternatives. First and most importantly, it is intensely sweet with a glycemic index of zero. Some concentrated stevia products are a whopping 500 times sweeter than sugar!

But what exactly is this South American herb known as Stevia rebaudiana? And do we really want to substitute our various natural sugars with it?

Will the real stevia please stand up?

There are a number of different types of stevia on the market as listed above. Unfortunately, some of them appear to have very little to do with the whole version that traditional cultures enjoyed.

The two sweet components isolated from stevia leaf for use as a sweetener are steviol glycoside (stevioside) and rebaudioside. Stevioside has a lingering aftertaste while rebaudioside does not.

Stevioside (steviol glycoside) traditionally makes up the majority of the sweetness and health benefits of this ancestral herb. However, when a stevia product contains a higher proportion of rebaudioside vs stevioside, the bitterness and aftertaste lessen considerably. It may even disappear entirely.

The manufacturing methods used to make stevia extract is what affects the quality, characteristics, concentration and taste. Food manufacturers can filter and purify rebaudioside up to 99%. This is why stevia extract containing primarily rebaudiana is more expensive. The more purified and concentrated, the sweeter and less bitter it is. Some versions are up to 500 times sweeter than sugar!

Traditional stevia is green and unprocessed. The leaves are simply dried and ground as shown in the foreground of the picture above. Sometimes the dried leaves are pulverized to a fine powder. The whole herb in this form has been used in Japan and South America for centuries as both sweetener and health remedy.

Because green leaf versions contain both sweet components of stevia (rebaudioside and stevioside), the whole form of stevia is slightly bitter and doesn’t have the intense sweetness of other products that are primarily filtered rebaudioside.

Green stevia powder is only 30-40 times sweeter than sugar. The bitterness creates an aftertaste that some people find disagreeable. The good news is that you get used to it after awhile.

The less bitter part of the stevia leaf (rebaudioside), which lacks the health benefits linked to stevioside, is generally used to make highly concentrated stevia extracts. The result is a far sweeter stevia than the whole green leaf type. It is also free of the disagreeable aftertaste.

Unfortunately, many of these products contain other fillers and ingredients. More on this below. They come in a wide variety of flavors too with a couple of the most popular shown in the picture above.

If you use a stevia extract, make sure it is from a reputable source that discloses all ingredients. Important information to obtain includes how it was processed and that it contains only stevia as the sweetener! The sweetness level generally runs around 100-200 times sweeter than sugar, but can vary a great deal from brand to brand.

Processed “stevia” products include Truvia, PureVia and others are to be avoided without exception. At up to 400 times the sweetness of sugar, these modern industrial amalgamations are “stevia in name only.”

It seems companies want to cash in on stevia’s “natural” and “traditional” street credentials without actually creating a product that is either. These, like the extracts above, don’t contain the beneficial stevioside part of the herb. On the other hand, they do contain a lot of other stuff the consumer likely does not want to consume like GMOs. Let’s look at that next.

Often, stevia products contain a number of other ingredients such as:

Note that the problem isn’t just about additives. Processing methods also matter a great deal. Let’s delve into this a bit further.

While humans have consumed the stevia plant for a long time, many modern versions bear little resemblance to the original. Worse, these industrialized products bring with them a host of modern contaminants.

The pure Reb A [rebaudioside] from the stevia plant that sweetens PureVia starts with stevia leaves, which are first milled and then steeped in water using a brewing method that is similar to brewing tea. The resulting stevia extract is then further purified to separate the Reb A through a proprietary technology using ethanol. (1)

But that isn’t all. Purevia also contains sugar alcohol (such as erythritol and xylitol) and the food industry’s favorite catch-all ingredient – natural flavors. It seems the comically named Purevia is not so pure after all.

Other methods of stevia extraction include methanol, toxic solvents, and a host of other chemicals. (2)

It seems our modern day stevia has wandered a long way from the whole leaf!

Stevia’s impact on blood sugar is unclear. Between studies and actual patient surveys, it seems best to conclude that stevia has an uncertain and individually specific impact on blood sugar levels. Some of this is because studies sometimes includes parts of the plant that don’t end up in the final, processed form.

For example, a 2005 study published in the journal Planta Medica found that the effect of stevioside on blood sugar levels was dose dependent with stevioside lowering blood glucose levels and decreasing insulin resistance in rats with diabetes. However, this research is preliminary. What’s more, FDA-approved forms of stevia for use in food don’t contain stevioside. Hence, most of the stevia products you can buy in the baking section in grocery stores won’t have this beneficial effect on your blood sugar levels. (3)

How to Determine Stevia’s Effects on You Personally

A glucose meter is the best approach to determining if stevia (and a lot of other foods!) have a negative impact on your body. They are incredibly affordable nowadays with easy to use models costing about $10. You don’t need to be a diabetic to make great use of these on a day to day basis.

Some warn that stevia can have a negative impact on the adrenals and other body systems.

Stevia is “sweet” on the palate, so the body assumes it is receiving sugar and primes itself to do so. Glucose is cleared from the bloodstream and blood sugars drop, but no real sugar/glucose is provided to the body to compensate. When this happens, adrenaline and cortisol surge to mobilize sugar from other sources (liver and muscle glycogen, or protein, or body tissue) to bring blood glucose back up. (4)

If this information is accurate, only low to no carb foods containing stevia present an actual concern. In such a scenario, stimulating the body’s sweet response without actually providing any carbohydrates appears to be imprudent. This is likely why the low carb Bone Broth Diet recommends against any stevia at all.

However, using stevia in foods that contain carbs as a way to increase sweetness without sugar or calories does not appear problematic. Similarly, using a stevia sweetened dessert with a meal that supplies carbs should not pose any issues.

Chris Kresser L.Ac notes that this particular point remains a contentious issue. Current research combined with information on traditional use versus modern versions leave many divided on stevia benefits.

Because stevia contains almost no calories, one potential issue with stevia is that the sweet taste without the influx of sugar might confuse our insulin response. While this is an understandable concern, stevia has actually been used traditionally as a treatment for diabetics and may actually improve blood sugar control. (5)

As if all the above isn’t enough to chew on, here is a bit more. Stevia may also be a hormone mimicker as pointed out by Dr. Sarah Ballantyne.

While small and occasional consumption of stevia likely has little to no impact on general health, it should not be consumed on a regular basis especially by those with altered hormone balance and dysfunctional immune systems. (6)

Some sources claim that stevia use negatively impacts fertility. However, the studies supporting this assertion have design flaws or otherwise lack merit. Other studies show no negative consequences for fertility. (7)

This doesn’t mean that stevia cannot negatively impact a particular person’s fertility.  However, it does mean that on the whole, this negative health effect seems unlikely.

Again, there is significant debate regarding the positive and negative health impacts of this herbal sweetener. It has a clear and long history of favorable use in many parts of the world as a health remedy for a wide range of conditions. However, a few certain and uncertain drawbacks and dangers exist, especially with processed forms.

So where does this leave us in the final analysis?

Some diets like Trim Healthy Mama advocate stevia and other no carb sugar replacements such as erythritol because of macro-nutrient combining rules (fats, carbs, and protein). Stevia allows sweetness without carbs, an approach that has legitimate health concerns touched on above.

For those who follow traditional dietary principles such as Wise Traditions, Paleo, SCD and others, the unprocessed, low temp dried herb and quality extracts appear to have little to no risk if consumed on occasion and in moderation.

At the same time, there is no reason to avoid the many nutrient dense, traditional sweeteners. These include maple syrup, coconut sugar, sucanat, raw honey, yacon syrup and others.

Stevia, like many other no calorie sweeteners is also a low to no nutrient option similar to monk fruit.

Lucuma is similar, though slightly higher in calories. Our ancestors consumed sweeteners not only as a source of calories, but also for valuable nutrients and minerals. Even the whole leaf form of this herb does not compare to the nutrient density of many other traditional sweeteners.

If you do need or want to use stevia, make sure you are getting only the true herb.

Trusted sources include Frontier and Sweetleaf among others.

Make sure to patronize brands that process without toxic chemicals and solvents. In addition, it should be free from other additives, processed ingredients, and artificial sweeteners.

Finally, don’t consume stevia in any form as part of a meal or snack that contains few to no carbs. This will avoid an undesirable adrenaline and cortisol stress response from stimulating the sweet induced metabolic process without any carbs to support it.