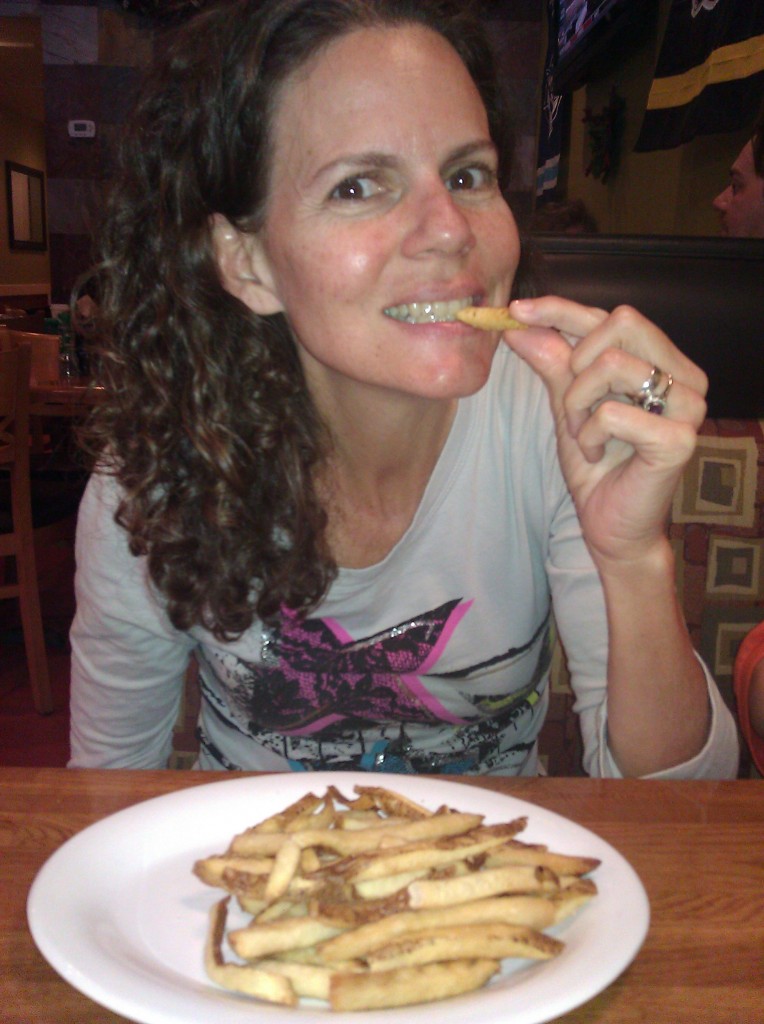 Yes, that’s a picture of me eating fries at a restaurant at lunch yesterday.

Can you believe it?   I’m actually enjoying the experience and not at all worried that I will be feeling rather sick or in desperate need of a nap later.

My kids have been bugging me lately to go to this new burger joint that was recently voted #1 in our metro area.

I’ve heard that one before.

I’ve tried Five Guys (barf) and Jakes’ Hamburgers (I had to take a 2 hour nap afterward).  I even tried this upscale restaurant called Grill One Sixteen that has Angus burgers for only $5 each for Sunday lunch.

Every. Single. One.  Makes me ill or desperately tired as my digestion grinds temporarily to a halt as it tries to figure out how to deal with what I just ate.

Even Evos, the so called healthy fast food, leaves much to be desired.

I’m just a sensitive gal, what can I say?

Ok, I’ll admit it.  I’m just a Food Snob who is used to feeling pretty darn good most of the time and any food that isn’t absolutely whole, awesome, and additive free makes me feel lousy in short order.

How does the general public get through the day, I often wonder?  If I felt all the time like I do after eating at a typical restaurant, what would I do to function on a daily basis?

That’s how most folks do it, right?

And, plenty of over the counter painkillers for the almost daily headaches, backaches, and joint pain.

So as you can imagine, I was in NO HURRY to try out Burger Monger.  But, kids have a way of getting to you, don’t they?  After a couple weeks of raving about this place, I said, “Ok, let’s go for lunch on Monday.”

Yesterday happened to be the first day of Winter Break so we all went to Burger Monger to celebrate.

Soooo, I’m sitting there in the booth with my arms folded in resignation about the negative eating experience that is about to be thrust upon me.

Sometimes we must suffer for the ones we love.

Suddenly, out of the corner of my eye, I spy a flyer that describes Burger Monger’s food philosophy.

I am not going to blog about this, I tell myself, as I grudgingly get out of my seat and go and pick one up to look at.

I open it and see that they use Haagen-Dazs vanilla ice cream for their milkshakes.

Not bad, I think to myself.   Better than the mystery mix that most restaurants use.  Haagen-Dazs is definitely one of the best quality commercial ice creams available.

I also read that their buns are fresh baked and preservative free and the cheeses are gourmet, real milk cheeses.

Next, I start to read about the meat they use for making burgers.

“Akaushi Beef contains a higher concentration of monounsaturated fat relative to saturated fat, which the American Heart Association says can lead to lower cholesterol, the prevention of coronary heart disease, and weight loss.”

Double yawn.  More of the lipid hypothesis baloney.  When will people actually wake up about saturated fat, I think to myself?   As many people with low cholesterol have heart attacks as those with high cholesterol.  Total cholesterol means nothing with regard to heart disease!

The flyer went on to say that the taste of Akaushi Kobe Beef is rich, buttery, and unbeatable.

Ok, that’s sounds good.  I was definitely interested in how it would taste compared with conventional and grassfed beef.

Flyer back on the table.  Arms folded again.

I notice one of the servers walking by me with a plate of fries.

“Don’t ask about the fries”  I say to myself.  “You know they’re fried in rancid vegetable oils cleverly promoted as “transfat free”, so why bother?”

The server looked over and smiled.

I smiled back.  “Could I ask you a question?  What oil do you fry your french fries in?”   I asked quietly.

I almost fall on the floor.

I sit in stunned silence taking this in for a few moments trying to figure out if what I heard is actually true. A restaurant actually frying its french fries in a healthy oil?

Hell has obviously frozen over.

Just then, the owner whose name is Jake walks by and I say hello.

I mention the fact that I am so pleased that they fry their french fries in beef fat because this is so healthy and traditional and how I do it at home.

Jake says that beef fat is the best fat to fry french fries in and he is going to do it this way regardless because it’s the right way to cook them.

I shake his hand and congratulate him on sticking to his guns.  I mention that I’m a food blogger and that I will be writing a post about his restaurant (what did I just say?).

Jake is obviously very passionate about what he does and mentions that they will be opening their second location in New Tampa soon.

I’m thinking to myself, now here’s a restaurant that needs to get franchised!

As my family is eating, I casually mention that I talked to the owner Jake and that the fries are cooked in beef fat.

“So that’s why we can only eat a few and be full” exclaims my 9 year old.

Don’t you just love it when your kids demonstrate that they get it?

Jake the owner drops by at the end of the meal and asks if it would be ok to give us dessert on the house.

Being a food blogger definitely has its perks.  Scoring free dessert is one of them.

Dessert was strawberry buttercake with 2 scoops of Haagen-Dazs vanilla ice cream on top.

The buttercake turned out to be Entenmann’s.   I looked up the ingredients.  It’s says it’s made from all butter.   Love the butter, but I’m sure there were some preservatives in there though.  The ice cream was, of course, sensational.

All in all, Burger Monger was the best burger experience I’ve ever had eating out.  Not perfect for sure, but moving very strongly and purposefully in the right direction.

Maybe there’s hope for the American restaurant after all.

Why Low Salt Diets Are Incredibly Harmful to Health

Have You Tried Kombucha Tea?