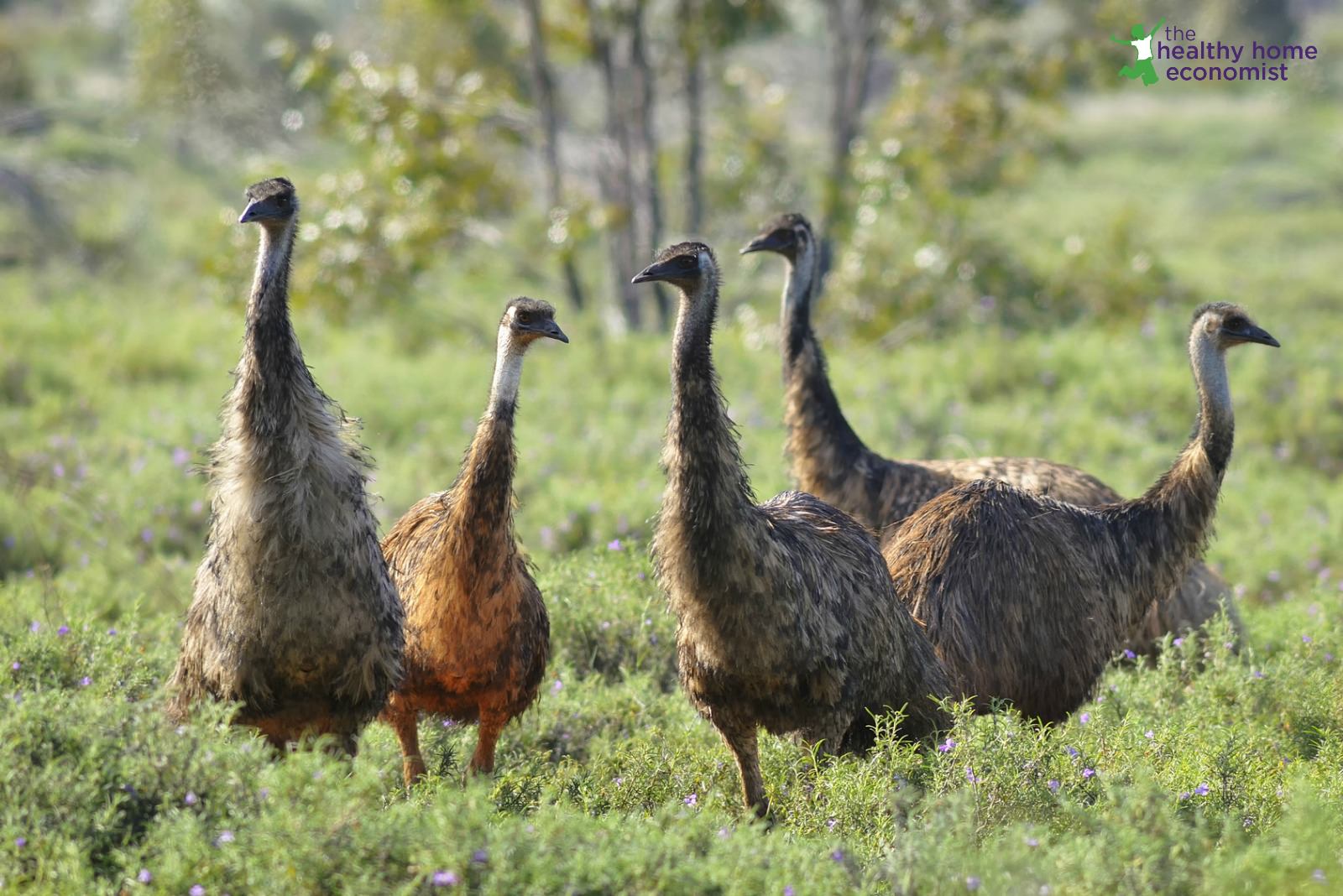 Nutritional pioneer Dr. Weston A. Price commonly referred to the wonder nutrient Vitamin K2 as “Activator X”. Did you know that emu oil is one of the highest food sources of this elusive and critical nutrient on the entire planet?

The problem is that it is extremely difficult to get sufficient quantities of this fat soluble vitamin in the diet even if whole foods based.

The vast majority of people don’t even come close to getting enough, currently estimated to be a minimum of 45 mcg/day.

In particular, MK-4, the potent form of vitamin K2 found in animal foods is extremely difficult to obtain in the diet. Grassbased foods are one of the best sources, but relying only on grassbased foods for MK-4 is risky due to the worrisome depletion of our soils which will take several decades if not even a century or two to reverse on a widespread basis.

Unfortunately, it is prohibitively expensive to isolate and put natural K2 in the form MK-4 into a supplement. Consequently, the MK-4 supplements that are available on the market are synthetic.

Seeking to obtain vitamin K2 solely from food is also a challenge. Natto is the food highest in Vitamin K2, but it is difficult to source and even more difficult to consume due to its strong taste, off-putting smell, and slimy texture. Natto contains up to 1,103 mcg of K2 per 3.5 ounce (100 gram) portion which is significantly higher than every other food. Unfortunately, there is no MK-4 in natto, only a less potent form of K2 known as MK-7.

The second highest food in vitamin K2 is goose liver pate which has 369 mcg of K2 (100% as MK-4) per 3.5 ounce (100 gram) portion. While delicious and wonderful to eat, goose liver pate is hard to find. It is also a high end, gourmet food which makes the price out of reach for most.

Given the difficulty of getting enough K2 via the diet (45 mcg/day minimum based on population studies and data obtained from vitamin K 2 doses given in clinical trials with several hundred mcg/day likely a much better target) and the synthetic nature of MK-4 supplements, I have in the past opted to take a vitamin K2 supplement derived from natto (nonGMO soybeans), which is the form of vitamin K2 known as MK-7.  This is the same K2 you would get if you actually ate natto.

The problem with taking just MK-7 supplements, however, is potentially missing out on the extremely potent benefits of natural MK-4 found in animal foods. As mentioned above, the highest food based source for MK-4 is goose liver pate which is hard to find and expensive. Grassfed butter and egg yolks (regular eggs and butter would have little to no vitamin K2) contain some K2 as MK-4 but not enough to easily reach the goal of at least 45 mcg/day (vitamin K2 has no known toxicity level).  Besides, consuming 3.5 ounces of grassfed butter per day (nearly a quarter of a pound) to obtain 15 mcg of K2 seems a bit unrealistic even for those of us who eat a lot!

And, what about those who are allergic to dairy or eggs? This makes it nearly impossible to get any natural MK-4 in the diet.

Fortunately, research on an ancestral Australian superfood, emu oil, has now made the task much easier.

The benefits of emu oil have been recently discovered via testing as it contains nearly as much of the elusive form of vitamin K2, MK-4, per 100 grams as goose liver pate.

No wonder the Australian Aboriginals considered oil from the emu to be a sacred food. This ancestral society has prized the emu as food and “bush medicine” for thousands of years. The native bird is even part of their mythology known as “Dreamtime”.

It wasn’t until 1860 that the traditional use of emu oil by the Aboriginals was first recorded by G. Bennett in his Gatherings of a Naturalist in Australasia.

Not just any emu oil, however.

Not All Emu Oil is Beneficial

The most biologically active emu oil loaded with K2, 100% as the potent MK-4, comes from a specific genotype of emu only found in Australia.  All emus outside of Australia are interbred and do not contain this special genetics.

In addition, the Australian emus must not be fed GMO feed or be subjected to antibiotics, growth hormones or chemicals of any kind. They must be allowed to live and reproduce in their natural habitat eating their natural diet.

When emus are raised in this fashion, their fat accumulates large amounts of K2. This fat is what enables these birds to survive the extremely harsh environment and climate of the Australian outback.  The emu’s fat stores allows it to store food and energy when it is needed most: during droughts, food and water shortage and especially during the reproduction phase each season.

During mating season, the male emu sits on his mate’s cluster of eggs for 54 days straight without food or water intake of any kind. The male emu does not even have a bowel movement during this important time. All hibernating animals such as bears, hedgehogs and snakes also accumulate this type of vitamin K2 rich fat. However, only the emu is able to provide this nutrient rich oil on a commercial basis.

Where to get Emu Oil from Pastured Australian Emus

I was privileged to be able to get to know Liz Schlinsog, one of the pioneers of Australian emu oil, who I met at a Wise Traditions Conference in Atlanta. She got me started with researching this sacred food and since that time, I’ve been using it myself (this is what I buy).  I have been so thrilled with this special emu oil that I was relieved when I learned that my friends at Radiant Life were interested in carrying the product as the very first distributor here in North America so that others could also try it for themselves.

Currently, this indigenous Australian emu oil is available in capsules and liquid.  Having used both, I would suggest that the liquid form is best used as a lotion because it is extremely thick (and feels absolutely gorgeous on the skin).  The capsules are best used as a K2 supplement.

Each 1 gram capsule of unadulterated Australian emu oil with nothing added and nothing taken away has been found by lab tests to contain approximately 3.6 mcg of K2 (100% as MK-4).

This means that taking 2 capsules in the morning and 2 in the evening would give you about the same amount of K2 as consuming 3.5 ounces (nearly 1/4 lb) of pastured butter.

The answer to this question is really up to you based on how much K2 you are trying to consume each day. According to the book Vitamin K2 and the Calcium Paradox, a few hundred mcg/day of K2 is a good idea for therapeutic reasons. In that case, using a nonGMO natto extract supplement in conjunction with the emu oil would be wise as it would be prohibitive to take just emu oil.

What About High Vitamin Butter Oil?

High vitamin butter oil is a good source of K2, but to my knowledge, there is no published data on the amount of K2 in it.  The best I could find was from the book Vitamin K2 and the Calcium Paradox which lists pastured butter as containing 15 mcg per 3.5 ounces/100 grams.

I think the bottom line is to get vitamin K2 from a wide variety of whole foods. Given that the amount of K2 in a food can tend to vary, this is especially important! The Australian Emu Oil provides an excellent option, particularly for those who are allergic to dairy or do not have access to pastured products. It ensures that this critical nutrient is being consumed in adequate amounts as potent MK-4.

Gatherings of a Naturalist in Australasia

Vitamin K2 and the Calcium Paradox

Are Nightshade Vegetables Worsening Your Pain?

Safest Sources of LECITHIN in Supplements and Food