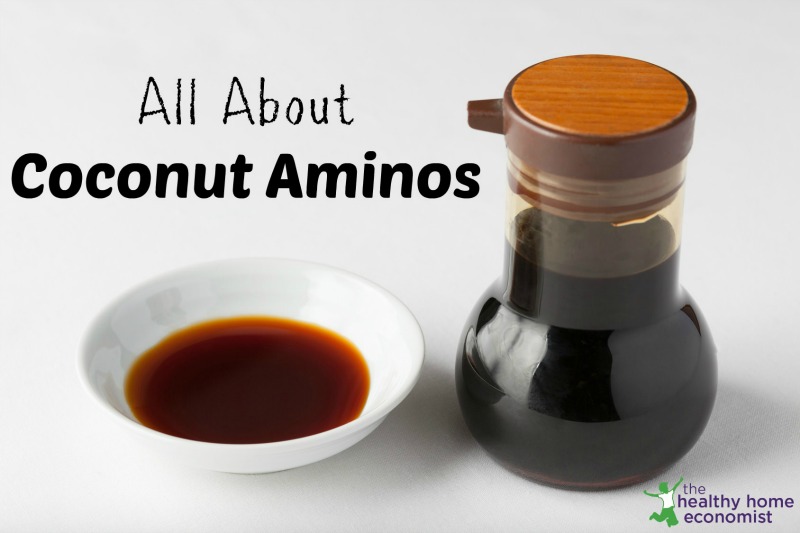 Many people allergic to soy sauce enjoy coconut aminos instead. It is also a competitive product to Bragg Liquid Aminos. Let’s take a look at this newest addition to the coconut cornucopia and see how it stacks up in comparison.

How Coconut Aminos Are Made

A single company is manufacturing many of these new coconut foods flooding the market. That company is Coconut Secret. Bragg has also jumped into the market, a company best known for the production of liquid aminos and raw apple cider vinegar.

The process of making aminos from coconut according to Coconut Secret is fairly simple. It involves cutting coconut tree flowers to prevent the production of fruit and then tapping the tree to collect the flowing sap. Vats of sap gradually ferment with additional salt with the final product transformed into coconut aminos.

What’s more, the product contains no additives or preservatives. It’s that simple.

Bragg is now making a coconut aminos product too. However, it is not fermented like the Coconut Secret alternative. The ingredients are organic coconut tree sap, distilled water, sea salt, and organic apple cider vinegar.

Aminos from fermented coconut sap has a nice balance of salty, a hint of sweet, and umami. Surprisingly not a hint of coconut flavor is detectable.

Even if made via fermentation, coconut aminos are not raw although it used to be when new to the market. This is because it is pasteurized to render it shelf-stable. Coconut Secret explains why:

We have now arrived at the point that it is no longer feasible for us to maintain the “Raw” status of this product, and have made the decision to implement a brief pasteurization process. This process simply involves heating the Coconut Aminos to 165 degrees Fahrenheit for 30 seconds during bottling, and then tipping the bottles upside down for one minute to sterilize the air space between the glass and the cap. Unfortunately this slows down our bottling capacity, but it is the only way that we can stabilize this product without adding any other ingredients possibly affecting the delicate flavor profile of this product. (1)

The good news is that this additional processing doesn’t affect the flavor, nutrition, or anything else about the product.

There are a number of reasons someone may prefer coconut aminos over soy sauce. First, GM soy is the source for most soy sauces in North America. As a result, those who consume it risk the GMO health dangers associated with it.

Also, a lot of soy sauces contain all sorts of questionable ingredients beyond just the conventional soybeans. This includes additives, preservatives, stabilizers and the like.

In comparison, coconut aminos are just coconut aminos. Products with ingredient lists that are short, clear and unambiguous as to the contents are preferable to those that are not.

Second, some people are allergic to soy but still want to enjoy dishes that require the flavors that soy sauce creates. Coconut aminos are a great option for such individuals and such dishes.

Most traditional soy sauces contain gluten (wheat), so coconut aminos offers an easy gluten-free option. Although gluten-free soy sauce options are now available, the fact that coconut aminos are both soy and grain-free makes this choice appealing to the Paleo community.

In addition, those on gut healing protocols such as the GAPS Diet, Autoimmune Paleo, or SCD (the Specific Carb Diet) can also enjoy it. (2)

Finally, coconut aminos contains less salt than soy sauce. Roughly two-thirds less in fact, which is significant! For people who need to watch or reduce sodium intake, coconut aminos are a great option.

Compared to liquid aminos, the coconut version is a decidedly better choice. Although Bragg Liquid Aminos contains less sodium than soy sauce, aminos from coconut is a much more desirable choice. According to Dr. Kaayla Daniel:

Liquid aminos are an unfermented liquid soy product invented by health food pioneer Paul Bragg and is a soy sauce alternative preferred by many health aficionados. Its main claim to fame has been a lower sodium content than tamari or shoyu.

As a hydrolyzed [nonGMO soy] protein, liquid aminos contain plenty of MSG produced as a residue of the hydrolyzing process. It also contains aspartic acid, another brain damaging excitotoxin, which is a component of aspartame as well.

The takeaway: No bragging rights for liquid aminos! (3)

In comparison, liquid aminos contain MSG derived from the highly industrialized process of hydrolyzing soy protein. Hence, the glutamate in fermented coconut aminos is safer and likely better tolerated than the manufactured MSG in liquid aminos.

For those susceptible even to the small amounts of glutamate or histamines in fermented foods, the unfermented Bragg coconut liquid aminos is a better choice than Coconut Secret.

Some websites attribute a wide and large array of health benefits to coconut amino consumption. The problem is, the studies that support these claims are studies on whole coconuts, coconut oil or other coconut products, not the aminos!

As of this writing, it appears that there are no known studies on the health benefits of coconut aminos specifically. Hence, beware of false health claims floating around about it.

Coconut aminos contain no medium-chain triglycerides (MCTs) one of the most beneficial macronutrients found in coconuts. In fact, they contain no fat at all. As a result, it seems highly unlikely that many of the positive benefits of coconuts and coconut oil apply to coconut aminos.

This doesn’t mean that the product is without health benefits, just that it would be highly improper to attribute the health benefits shown in certain studies for coconut oil and coconut products as applicable to the consumption of coconut aminos!

In addition, a person would typically use a rather small amount of coconut aminos for any given dish. Thus, given the very small amount consumed in a day or even a week, the impact on health is probably negligible.

Some organic and traditionally brewed soy sauces are unpasteurized (this is the brand I’ve used for years), which is an edge nutritionally if you are using it for dipping at the table with sushi and related dishes.

But, some dishes that use soy sauce are cooked after it is added. In that case, using enzyme and probiotic-rich unpasteurized soy sauce isn’t any better than coconut aminos.

Coconut oil is a sustainable product when farmers manage the groves according to green, environmentally friendly practices. But the plethora of new coconut products flooding the market, especially coconut sugar and sap (and thus also the aminos), some say may not be. (4)

Coconut Secret considers its product environmentally friendly. It even claims that it is more sustainable than coconut oil. Here’s what the company website says on the matter:

The most remarkable blessing about tapping a coconut tree, is that once tapped, it flows its sap continuously for the next 20 years.  From a sustainability viewpoint, the harvestable energy production from tapping coconut trees for their sap (which yields 5,000 liters per hectare), rather than allowing them to produce fruit, is 5-7 times higher per hectare than coconut oil production from mature coconuts. (5)

No information on the sustainability aspects of Bragg coconut aminos is currently available from what I could find at the present time. It is a good sign, however, that the coconut aminos come from organic coconut trees.

Go Ahead and Enjoy!

There is no reason not to use coconut aminos and high-quality soy sauce and enjoy both. Skip the liquid aminos, however!

It is especially important to skip restaurant soy sauces and use your own for takeout meals.

Coconut aminos have a similar but slightly different flavor profile than soy sauce allowing an easy change-up for the same dish. However, don’t expect it to be the perfect replacement for all dishes.

For those with allergies or other soy related issues, coconut aminos provides a perfectly acceptable alternative, and one that you can consume liberally and with good feelings!

Why Fermented Soy Is More Thyroid-Suppressing Than Plain Soy