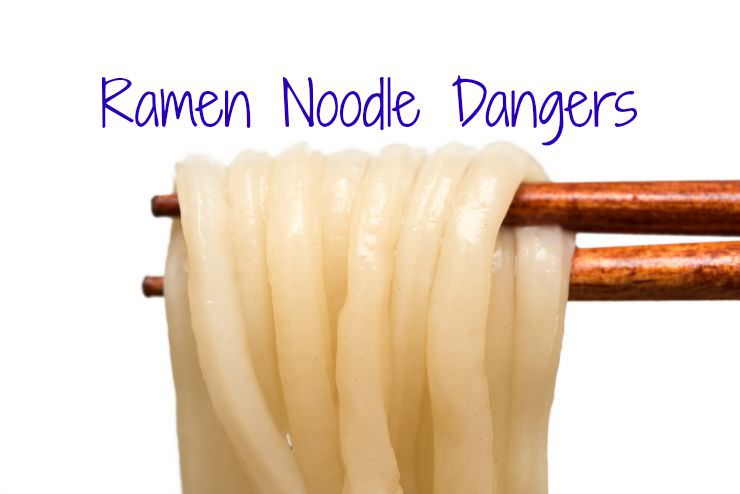 Like many other poor college students, ramen noodles were a primary line item in my bare bones food budget.

Gross at it sounds to me now, I typically ate ramen soup 3-4 times per week.   I loved every. single. bite.   No kidding.

At 10 cents per meal, the price was definitely right.

The high amount of synthetically derived monosodium glutamate (MSG) in ramen noodles tasted so good. It tantalized my tastebuds and fooled my body into thinking it was getting nourishment. The sad truth is that it was getting nothing but empty calories, chemicals, and additives.

Now, a new study involving over 10,000 people warns of the dangers of ramen noodles, especially for women, which go far and beyond the metabolism disrupting, hypothalamus frying MSG.

In fact, some of the dangers associated with ramen noodles have nothing to do with the noodles themselves, which means organic ramen noodles eaters are at risk too.

The findings published last week in the peer-reviewed Journal of Nutrition warned that those who consume ramen noodles as little as two times per week are at skyrocketing odds of developing metabolic syndrome with its host of prominent symptoms: obesity (particularly abdominal), diabetes, heart disease, and stroke. Women are at an increased risk.

The study bolsters previous research on rats which showed that MSG consumption caused blindness and obesity and studies on mice that demonstrated that MSG intake caused brain lesions on the hypothalamus.

Ramen noodle consumption is high among Asian populations. Consequently, the research of Dr. Hyun Joon Shin MD, a clinical cardiology fellow at Baylor University in Texas and a nutrition epidemiology doctoral student at the Harvard School of Public Health, focused primarily on South Korea, which has the highest per-capita number of instant noodle eaters in the world.

A total of 10,711 adults (54.5% women) ages 19-64 years of age were analyzed, with adjustment for sampling design complexity. The diet of the study participants was assessed by using a 63-item food-frequency questionnaire.

Researchers identified 2 major dietary patterns with the use of principal components analysis: the “traditional dietary pattern”, high in rice, fish, vegetables, fruit, and potatoes, and the “fast-food pattern”, with less rice intake but frequent consumption of soda, fried food, and fast food including instant noodles.

While instant noodle intake is greater in Asian communities, the association between instant noodle consumption and metabolic syndrome has not been widely studied. I decided to investigate in order to uncover more distinct connections. (1)

Dr. Shin’s findings did indeed uncover a disturbing association between eating instant noodles two or more times a week and the development of cardiometabolic syndrome. This condition raises a person’s likelihood, particularly in biological females, of developing heart disease and other conditions, such as diabetes and stroke. (2)

Dr. Shin said that the gender differences of consuming ramen noodles can likely be attributed to biological differences between the sexes, such as sex hormones and metabolism. The gender gap may also partly be caused by the different eating habits between men and women and variation in the accuracy of food reporting.

Another potential factor in the gender difference is a chemical called bisphenol A (BPA), which is used for packaging some ramen noodles brands. Studies have shown that BPA is an estrogen mimicker and endocrine disruptor as it interferes with hormone messaging within the body.

BPA-free packaging is likely no safeguard. Alternative chemicals such as BPS have the same and perhaps even worse hormone-disrupting effects. (3)

Dr. Shin is hopeful that the positive impact of the study on consumers can be substantial considering the popularity of ramen noodles and other instant noodle products. He also said it highlights the importance of understanding the effects of what we feed our bodies:

This research is significant since many people are consuming instant noodles without knowing possible health risks. My hope is that this study can lay a foundation for future research about the health effects of instant noodle consumption. (4)

Do you eat ramen noodles or other instant noodle type products?  Will you potentially change your consumption of these products based on this research?

I, for one, am glad I stopped eating ramen noodles a long time ago. I am also thankful that my kids know better than to be eating that kind of stuff at college!

If you wish to enjoy ramen noodles that are healthy, this recipe for ramen soup could be just what you are looking for as an alternative to unhealthy versions from the store.

Unfortunately, I have yet to come across a brand of commercial ramen noodles that is safe. This includes organic brands, which still have toxic packaging issues.

Headaches? A Most Likely Cause
Chicken Broth “No MSG” Labels are False

Ibuprofen Reduces Parkinson’s Risk? Are We Really That Stupid?