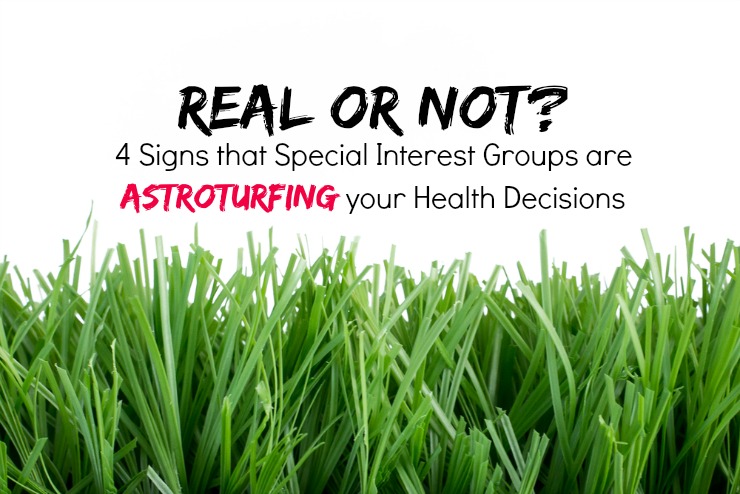 From paid social media trolls who pose as regular people to media reports on a new “wonder” drug, astroturfing has reached a level in our society where it is increasingly hard to separate fact from fiction.

At every turn, consumers are bombarded with carefully crafted messages on TV, online, and in print that are designed to appear objective and/or widely supported at a grassroots level. The goal is subtle manipulation of public perception and behavior for the benefit of the corporations, industry trade associations, or special interests that fund them.

Becoming a wise and very savvy consumer of information to quickly recognize when you are being played is an essential skill today. It has become critical to accomplish the most basic of tasks such as feeding your family healthy and selecting the most effective, nontoxic medical care when needed.

Author and investigative journalist Sharyl Attkisson knows the signs of astroturfing well. She has dealt with them her entire career and is now sharing this knowledge with the world so that the average person can use information as a means of empowerment rather than enslavement.

Cancer: The Most Astroturfed Media Message of All?

Nowhere is astroturfing more aggressive and shrill than in the fight against cancer.

Effective alternative cancer treatments to the cut, poison, burn (aka, surgery, chemo, radiation) standard of care are quickly snuffed out by the FDA, a frequent participant in astroturfed messaging.

Only three days before Dr. Bradstreet was found dead in a river, for instance, federal agents from the FDA raided his research facility to seize a breakthrough cancer treatment called GcMAF.

Other less recognizable forms of astroturfing include the pinkwashing that occurs every October in the United States by a variety of organizations to raise money for “The Cure”. In reality, the money gets funneled exclusively into pharmaceutical industry coffers either directly or via industry funded groups. Unwitting, sincere citizens get sucked into these astroturfing scams with thousands turning out for walks or runs to “Race for the Cure”.

As one example, for fiscal year 2009/2010, not one cent from the Susan B. Komen Foundation went into education about how a diet high in sugar and processed foods greatly affects the development and spread of cancer. In addition, Komen refuses to acknowledge nontoxic screening alternatives to mammograms such as thermography even though it is well known that mammograms cause a significant number of breast cancers and also result in misdiagnosis and unnecessary toxic treatment of thousands of women every single year. The astroturfed “research” funded by Komen is for the pharmaceutical industry only. Not a dime goes to any other doctor or organization conducting breakthrough, nontoxic cancer research and therapies that aren’t blessed by Big Pharma.

The truth is, cancer is big business and fueling the public perception that chemo gives the best odds of survival when cancer comes calling is highly profitable for the pharmaceutical industry.

Recognizing the Signs of Astroturfing

Knowing that astroturfing is going on all around us all the time is the very first step to stop being influenced by it. According to Ms. Attkisson:

Astroturfers often disguise themselves and publish blogs, write letters to the editor, produce ads, start non-profits, establish Facebook and Twitter accounts, edit Wikipedia pages or simply post comments online to try to fool you into thinking an independent or grassroots movement is speaking. They use their partners in blogs and in the news media in an attempt to lend an air of legitimacy or impartiality to their efforts.

Ms. Attkisson suggests being on guard for these blatant signs that astroturfing is headed in your direction which include:

Ultimately, astroturfing can come from almost any direction, and it is up to you to figure out what is truly authentic information, and what is artificially created with the purpose of maintaining corporate profits, control and/or power (usually it’s all three). Being gullible is a dangerous trait in this day and age, but you can overcome it by being highly observant.

Ms. Attkisson’s compelling 10 minute TED talk is below. I highly recommend taking the few minutes it takes to watch it. Your health may one day depend on it.

Why Low Salt Diets Are Incredibly Harmful to Health