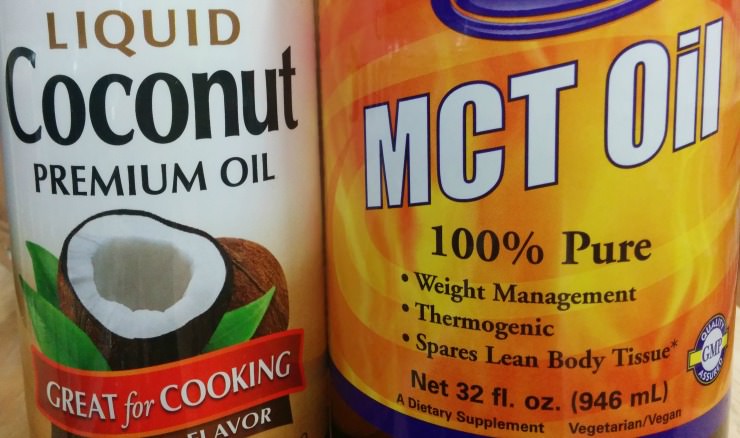 If there is one truism in the world of food manufacturing, it is this. If a particular whole food becomes popular with consumers, food manufacturers will figure out a way to adulterate and cleverly market it. The endgame is that the average consumer is fooled into believing that this new fractionated food is “better” than the original when, in fact, nothing could be further from the truth. This adage very accurately applies to the much hyped supplement MCT oil. It is also shrewdly marketed as liquid coconut oil for cooking purposes.

Both of these impostors have been popping up on healthfood store shelves sometimes boldly and inaccurately marketed as “better than coconut oil”.

Why Coconut Oil is a Fat Superstar

Coconut oil in its unprocessed, unfractionated state is one of the healthiest fats on the planet. It has nourished degenerative disease free traditional cultures in Asia for centuries. What’s more, these cultures suffered from essentially no heart disease. Thus, misguided accusations that coconut oil isn’t “heart healthy” are clearly false and completely unsupportable with anthropological evidence (1).

Coconut oil is loaded with beneficial fatty acids called medium chain triglycerides (MCTs). These MCTs or MCFAs (medium chain fatty acids) do not need to be digested by bile salts. These digestive juices are secreted by the liver and stored by the gall bladder. Hint: this is why coconut oil is a really good fat for those who’ve had gall bladder surgery (2).

What’s more, MCTs are not typically stored by the body as fat like longer chain fats are. Instead, they are quickly converted to energy which makes them particularly suitable for weight loss.

Consumers have caught onto the benefits of coconut oil for weight loss and overall wellness in recent years. Numerous companies now market virgin and expeller pressed versions for a variety of culinary uses.

MCT Oil is a Factory Food

Some companies are marketing impostor products trying to ride the wave of coconut oil popularity. Coconut oil processed into wannabes like MCT oil or liquid coconut oil becomes something else entirely, and for the consumer, it is definitely not for the better.

When I first saw liquid coconut oil on the shelf of my local healthfood store, I thought, “What in the world is this?  A coconut oil that stays liquid in the refrigerator and is “excellent” for cooking?”  I secretly wondered and knew that something fishy was going on.

Anyone familiar with coconut oil knows that it is a solid fat at temperatures below 76 F/ 24 C.  If the coconut oil stays liquid all the time, even in the refrigerator, something has been altered.

Similarly, I was receiving emails from readers who were using MCT oil, the supplement version of liquid coconut oil, instead of actual coconut oil for weight loss and other health purposes.

Things just didn’t seem on the up and up to me, so I started to sniff around ….

MCT Oil is the Dregs from Fractionated Coconut Oil

The dominant medium chain fatty acid in coconut oil is lauric acid, comprising 50% of the total fat content. It is no exaggeration to call lauric acid a superstar of fats, as it has scientifically proven antiviral, antibacterial and antifungal properties (3). Our human digestion converts lauric acid into monolaurin which defends us against viruses, bacteria, parasites and other pathogens.  In short, lauric acid is a huge boon to the immune system.

Lauric acid is not only one of the healthiest fatty acids on the planet, it is highly elusive as well. Made only by the mammary gland in humans and available in small amounts in butterfat and significant amounts in palm kernel oil and coconut oil, this beneficial fat is not widely found in nature.

Here’s where the trouble with MCT Oil comes in ….

People want lauric acid for the health benefits, but personal care manufacturers want it too for enhancing the quality of their products.

Isolated lauric acid functions as a skin conditioning agent. It is an inert and stable emollient used in creams, ointments, lotions, and lipsticks. Lauric acid slows the loss of water from the skin by forming a barrier on the skin’s surface. It also alters the thickness of liquids acting as a viscosity controlling agent and provides surface glide by promoting color dispersion in finished products. This is why lauric acid is removed from coconut oil and sold off for manufacturing purposes to personal care companies.

What’s left when the highly saturated lauric acid (and potentially a few other highly saturated fatty acids too depending on the manufacturer) with a melting point of 110F/ 43C is removed from coconut oil?  You guessed it: MCT oil, which is sold as a supplement and liquid coconut oil, sold for cooking. They are both the same thing, in essence the coconut oil “dregs”.

Another problem with MCT oil and its cooking counterpart liquid coconut oil is how they are manufactured. Forcible removal of lauric acid from coconut oil is not an easy process. It typically requires chemical recombination of refined fatty acids in coconut oil with a synthetic vegetable based ester. Chemical residues in the resulting MCT oil would be a definite concern as a result.

A more natural process is molecular distillation of virgin coconut oil. This method involves no chemicals and is a physical process only. While MCT oil manufactured in this manner would be nontoxic and safe to consume, it is important to note that MCT or liquid coconut oil is not found anywhere in nature. As such, regular consumption would have unknown health consequences.

To obtain the full health and weight loss benefits of MCTs in the proper proportions as found in nature, you need to consume virgin coconut oil, and if you need one with no taste, expeller pressed coconut oil.

Don’t fall for the MCT oil scam! It is a manmade product found nowhere in nature.

The reason I suspect that liquid coconut oil is marketed as better than coconut oil as a cooking fat is because it stays liquid even when refrigerated. However, while this is better for convenience, it is not better from a health perspective especially considering that coconut oil itself doesn’t need to be refrigerated due to a high resistance to rancidity even in very hot climes. For example, I keep a 5 gallon bucket of coconut oil in my garage which regularly gets over 100 F/28 C during summer days, and it keeps perfectly for months on end (it usually takes me about 18 months to use the whole bucket).

Note also that the most beneficial and elusive fat of all in coconut oil, lauric acid, is completely absent from liquid coconut oil. What’s primarily left are two saturated fatty acids, caprylic acid and capric acid, that are easily found in dairy foods, particularly goats milk and cheese.

The other fats remaining in MCT oil/liquid coconut oil after the high melting point fats like lauric acid are removed are oleic acid (the primary fat in olive oil) and linoleic acid found in vegetable oils.

While oleic acid is heat stable and fine for cooking, linoleic acid definitely is not!

When lauric acid and other high melting point saturated fats are removed from coconut oil, the resulting liquid coconut oil is not ideal for cooking. It is a far worse choice than virgin or expeller pressed coconut oil. The reason is because it contains a much larger percentage of heat unstable fats. What’s more, the longer chain fats, linoleic acid and oleic acid, actually encourage weight gain, not weight loss (4).

Do yourself a favor, if you want to experience the benefits of coconut oil for cooking or weight loss, use the real thing. Skip the cleverly marketed liquid coconut oil versions.

Here’s where I buy my coconut oil in case you’d like to compare brands.

As if not being as good as real coconut oil isn’t enough, food manufacturers have the gall to charge a fortune for MCT oil and liquid coconut oil. Sometimes the price tag is higher than a quality jar of virgin coconut oil itself!

This is one trick that manufacturers use to make you “believe” that their factory foods are better than the real thing.

MCT Oil is similarly priced, at or higher than the same amount of real, authentic virgin coconut oil.

You get the dregs and pay more for the “privilege”. Nice huh?

But Wait! What about MCT Oil with Lauric Acid?

While most MCT oil on the market has no lauric acid whatsoever, I have seen some brands of MCT oil recently where there is some lauric acid present. This means that only some of the lauric acid was removed (and sold off for industrialized purposes). The lauric acid amount present is not at the same high percentage as in unadulterated coconut oil, however.

If you remember the discussion from above, virgin and expeller pressed coconut oil are approximately 50% lauric acid. MCT oil with lauric acid contains far less. The highest I’ve seen to date is 30% with some brands not stating how much lauric acid is present at all!  One thing is for sure, if the MCT oil or liquid coconut oil stays fluid in the refrigerator, it doesn’t have much lauric acid in it. Also remember the problem with chemical residues in MCT oil if it wasn’t extracted using a physical process only.

The bottom line is that MCT oil is a factory fat.  It doesn’t occur naturally in nature and using it regularly won’t produce the health benefits and weight loss results of using the real thing: coconut oil.

There’s been quite a bit of buzz in recent years surrounding MCT oil and its application in Alzheimer’s reversal. It is true that MCTs are the active ingredient in Axona, a popular drug for those with Alzheimer’s Disease.  It is highly doubtful that MCTs are better than virgin coconut oil (VCO) on its own for this purpose however!

Dr. Bruce Fife, author of Stop Alzheimer’s Now, recommends VCO instead of MCT oil or MCT drugs such as Axona because the drugs become ineffective over time, wear off quickly, have side effects and cause free radical damage to the cells. And, MCT oil on its own is an adulterated, inferior form of coconut oil.

When the MCTs in virgin coconut oil are converted into ketones they act as a super fuel for the brain. This super fuel provides energy to the brain as well as stimulates healing and repair. Hence, these fatty acids are very important for those who espouse the keto diet.

And, don’t forget. Lauric acid is the most beneficial MCT of all and yet is absent in most MCT oil brands on the market or in significantly reduced amounts.

Go for the real thing and you won’t ever be disappointed down the road that clever marketing has somehow cost you your health or failed to produce the wellness results you seek.

Coconut Oil Capsules: As Effective as Straight Up?

How to Use Coconut Oil for Weight Loss

When Coconut Oil May Not Be Right for You

Why Buying Coconut Oil at Costco is Risky Business

Why Bulletproof Coffee Shoots You in the Foot