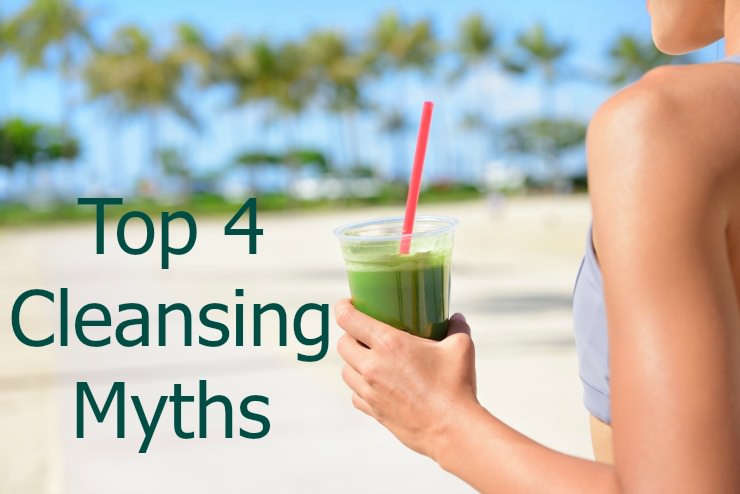 Why is it that the health community today seems totally obsessed with cleansing? Everywhere, even in supermarkets and gas stations, potions, powders, teas, and supplements are heavily promoted as the best way to detoxify the body, lose weight, and help gain muscle. Despite the well documented and very real dangers of drinking frequent green smoothies, people line up at juice bars to drink them regularly.

Cleansing proponents point out the fact that both Eastern and Western cultural traditions considered cleansing a healthful practice typically performed seasonally. While this is true, the modern equivalent has become distorted into something else entirely with questionable long term value to the consumer and dangerous methods the common denominator.

My first encounter with cleansing gone awry was in college. A friend who was fixated on maintaining her ideal weight with as little fluctuation as possible credited her weekend use of laxatives as the best solution for clearer skin and zipping up ultra tight jeans.

While cleansing can indeed help flatten the tummy and resolve breakouts, it must be combined with a healthy, nutrient-dense diet and nontoxic lifestyle else it can be seriously depleting. And, dependence on laxatives whether herbal or chemically based, is obviously not the way to maintain regularity!

Our World is No Longer Pristine – Anywhere

There can be no doubt that we live in a very polluted world. Ancestral cultures never had to worry about the chemicals in their food, water, and homes. They enjoyed a pristine environment, something we can only dream about today.

Dioxin, the chemical by-product of numerous industrial processes that is toxic to the human body, is stored in body tissues and considered a persistent environmental pollutant, has been found at the North Pole! There is a large vortex of garbage roughly twice the size of Texas swirling out in the middle of the Pacific Ocean that keeps growing with each passing year.

Gently cleansing the body of toxins on a regular basis is an important activity given these dire circumstances. You can no longer avoid all toxins, only minimize exposure.

Cleansing and detoxification can be (and frequently is) a critical aspect of healing and resolving chronic or degenerative diseases. It is also important for maintaining health when no disease is present. However, care should be taken that cleansing doesn’t become an unhealthy preoccupation – the end-all, be-all, if you will, for achieving health.

The cleansing methods used must also be considered with a critical eye. According to John Kozinski, author of Cleansing Myths and Dangers, appearing in the journal Wise Traditions:

” … the most popular cleansing methods are worthless at best and dangerous at worst.” (1)

Considering Mr. Kozinski’s experience for nearly 3 decades with the Kushi Institute where he witnessed the catastrophic illness that can result from faulty cleansing methods and restrictive natural diets, this quotation is worth careful consideration before any cleansing protocol is undertaken.

Mr. Kozinski goes on to explain the most popular and yet highly damaging cleansing myths that persist within the health community and promoted by so-called “health gurus”.

A very common misstep in extreme cleansing protocols is to eliminate one or more categories of foods from the diet.

Red meat or even worse, all meat, is the category to usually get the ax first.

The truth is, meat, the very food some diet gurus are quick to condemn, is easily digested by the body – much easier than plant foods as it turns out. They don’t clog anything, especially the colon!  If you think this idea is ludicrous, consider the digestion of a carnivore versus a herbivore. Herbivores require multiple stomachs and for some species, slow and repetitive chewing of their cud to facilitate adequate digestion. On the other hand, a dog can gulp down a pound of meat with a swallow or two suffering no digestive complications from the event. The gulped meat is easily handled by a single stomach!

Meat, which is a rich and complete source of protein, stimulates the production of stomach acid, a key component for complete and effective digestion. Consumption of incomplete sources of protein such as grains, legumes, and vegetables do not stimulate stomach acid to the same degree. Consequently, advocates of a plant-based diet frequently suffer from digestive disorders that stem from a lack of sufficient stomach acid production.

Eating some meat would be the best thing possible for these individuals, not avoiding it!

Don’t fall for the “meat clogs the colon” cleansing myth. The reality is that plant fiber is the food most likely to rot, ferment and feed pathogens in the large intestine.

It is important to realize that the concept of food combining is a theory! It is based on the premise that different foods have different digestive requirements. Competing digestive demands could then potentially cause ineffective digestion with food putrefaction in the stomach and intestines. It is the basis for many popular food philosophies such as the Trim Healthy Mama diet and cookbook series.

Specific food combinations that are to be avoided according to this myth are proteins like meat and starchy foods such as grains and potatoes.

The truth is that there isn’t any credible science to support this theory. Why this popular approach to cleansing of the digestion persists is a mystery given that it was based on incomplete science when it was first introduced in the 1920s by William Hay and then again by the book Fit for Life in the 1980s.

A quick look at ancestral cultures easily dispels the folly of food combining. Starches and proteins are regularly consumed together by traditional peoples across the globe. My own primary ancestry from Northern Europe considered sourdough bread and a thick slab of raw cheese to be a preferred lunchtime staple, a meal to provide lasting energy working in the fields until sundown, not a food combination worthy of an afternoon nap because digestion has ground to a halt.

If food combining had any validity whatsoever it would be reflected in the dietary patterns of healthy, degenerative disease free societies such as those written about in the classic Nutrition and Physical Degeneration.

The acid-alkaline approach to cleansing is another unproven theory that damages the health of so many unsuspecting consumers.

It is based on the notion that lots of green juicing or consumption of other primarily alkaline foods is necessary to maintain proper blood alkalinity.

While this might sound compelling, a basic knowledge of physiology renders it for what it is: a myth.  The kidneys are responsible for the pH of our blood, not our diet.

Further, measuring the pH of our urine or saliva does not accurately reflect the pH of the blood. These two articles by Chris Kresser clearly explain the scientific reality behind this cleansing myth. (3, 4)

If you enjoy juicing, then do it, but don’t practice it too excess thinking this will somehow alter your body’s pH and is a beneficial cleansing process to undertake for long periods of time. It’s not. 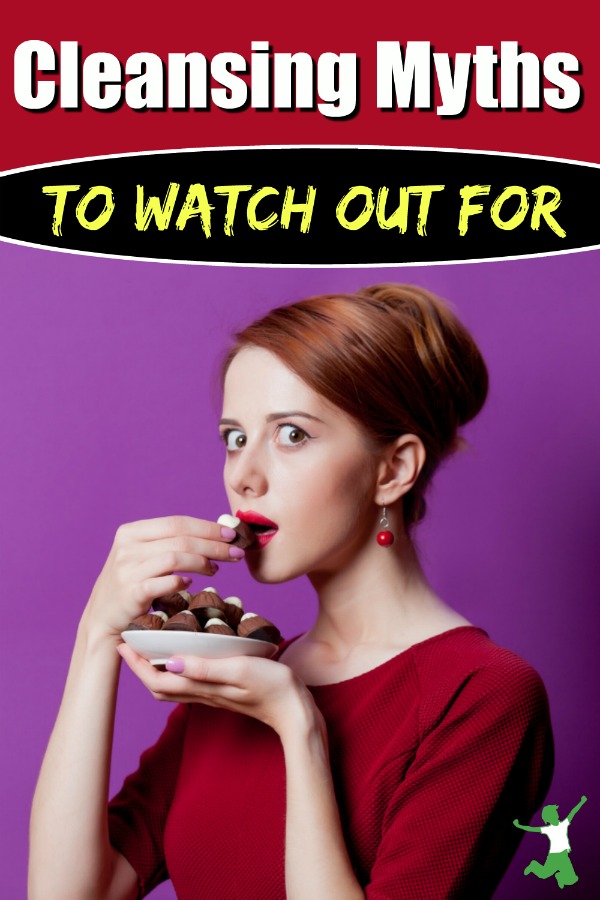 One cleansing myth that is very persistent and widespread is the use of fasting or calorie restriction with green smoothies or other liquid meal replacements (like SlimFast or the Master Cleanse, aka Lemonade Diet) in order to speed up the release of toxins and weight loss.

Here’s the myth: fasting or restriction of calories does not in any way cause your body to start dumping toxins. What does happen is that stress hormones shoot through the roof when you commence a cleansing protocol like this which temporarily speeds up the body’s biological functions including bathroom visits. This increase in stress hormones doesn’t last long, though. Eventually, the body adjusts to this metabolic roller coaster, and what Mr. Kozinski calls the “stress honeymoon” is over.

Another possible scenario that can occur is if a person is under constant stress so that no additional stress hormones are produced by fasting or calorie restriction. In that situation, elimination and other bodily functions can actually decrease with increased toxicity and a worsening of overall health.

Don’t fall for the calorie restriction approach to cleansing. You might lose a few pounds quickly, but the trade-off to health is devastating. This approach has the potential to further disrupt metabolism and harm health with a potential surge in stress hormones. You don’t need that especially in 2020!

Just because some popular and dangerous cleansing myths abound doesn’t mean that cleansing is a bad thing. As mentioned above, gentle cleansing is frequently necessary to resolve disease and experience optimal health. Below is a brief summary of gentle cleansing options to consider to get started.

Of course, cleansing for pregnant women is best avoided. With the exception of the adoption of a nutrient-dense diet which is the gentlest and most basic cleansing approach of all, detoxification protocols for breastfeeding women or children should be commenced under the advice of a health practitioner.

How to Make and Use a Castor Oil Pack

When is Iodine Supplementation Helpful to Health?