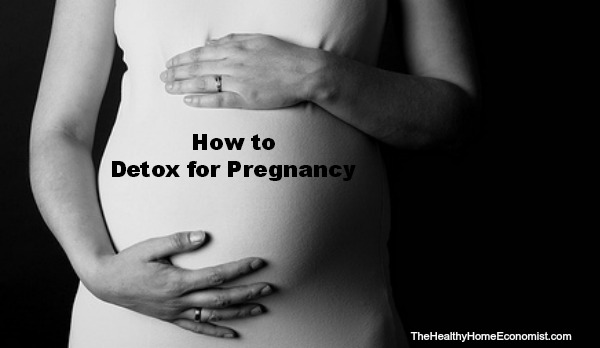 When planning to have a baby, how to do a pregnancy detox is an important issue to consider before conceiving. Women today have to resolve any history of exposure to toxins either from the environment or an unhealthy diet in order to appropriately cleanse the Body Temple. This is crucial preparation for carrying a healthy baby to term.

This is a modern-day challenge that Traditional Cultures did not have to grapple with. While Ancestral Societies initiated periods of special feeding prior to a couple conceiving a child in order to ensure proper nutrients were available for the optimal development of the fetus, detoxification from environmental poisons was unnecessary due to pristine water, air, and food.

Unfortunately, our world today has become a toxic soup with persistent environmental pollutants such as dioxin, the chemical by-product of numerous industrial processes found even at the North Pole. Exposure to dioxin results in storage in body tissues.

There is a large vortex of garbage roughly twice the size of Texas swirling out in the middle of the Pacific Ocean that keeps growing with each passing year.

The grouper in the Gulf of Mexico are so deformed from the BP oil spill I’m told by fishermen friends that I have decided not to eat it anymore. This is sad because I live on the Gulf Coast and just love grouper sandwiches.

Hike off many country roads in small towns or large — doesn’t seem to matter — and you will find garbage and illegally dumped chemicals everywhere. No doubt these pollutants are seeping into the groundwater.

While I could go on and on about the environmental contaminants each and every one of us are exposed to on a daily basis, the point is clear – the synthetic prenatal vitamins recommended by conventional doctors three months before conception is not appropriate preparation for such a huge life event.

A minimum of 6 months and ideally a full year of slow detoxification combined with nutrient dense dietary preparation is wise. Toxic babies born to toxic mothers are more likely to have allergies and even be allergic to their own mother’s breastmilk. Autoimmune issues, behavioral problems, and excessive crying characterize babies born with a large toxic load according to Nutritionist Kaayla T. Daniel PhD.

Above all, efforts to detox your body for pregnancy should be gentle!  Long juice fasts or doing the Master Cleanse is totally unnecessary and even counter-productive. There is no need to stress and strain the body with fasting or highly restrictive diets to get effective results. 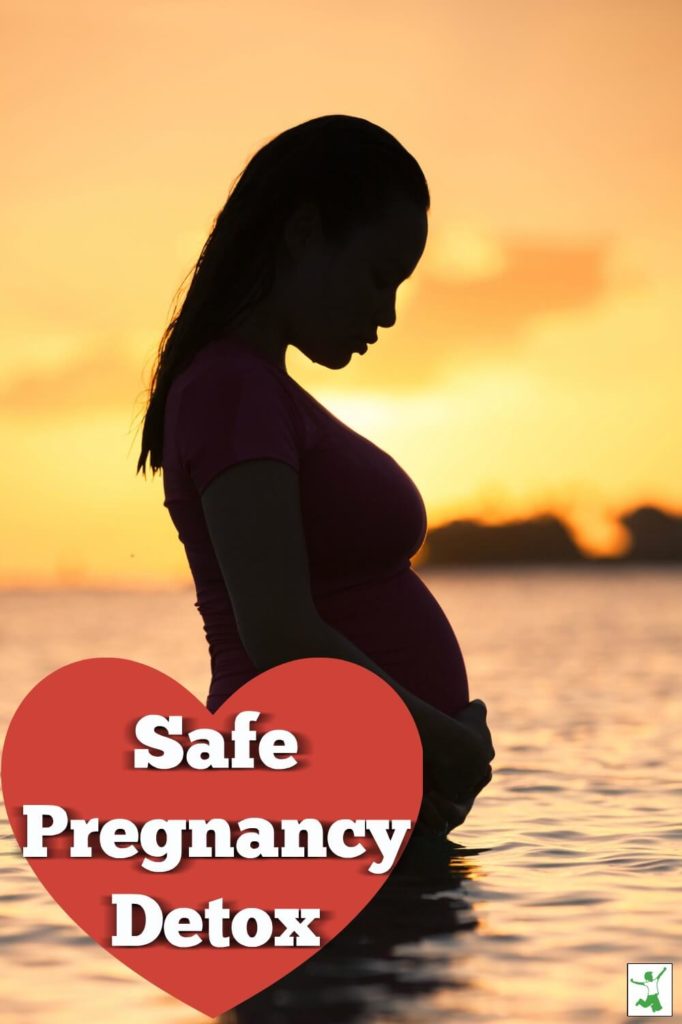 How to Safely Do a Pregnancy Detox

With gentle and effective as the primary goals, here are six strategies to consider as the foundation for a pre-pregnancy detox regimen.

My approach to detoxification for my first pregnancy 16 years ago was very simple – an organic diet which included a shot of fresh, organic wheatgrass juice almost every single day for several months. The chlorophyll in wheatgrass is what makes it so cleansing as chlorophyll is a potent blood, liver, and gastrointestinal cleanser.

Fresh wheatgrass juice (not cold-pressed) also contains a variety of vitamins, minerals, amino acids, probiotics, and enzymes. In addition, it is low in oxalic acid which can be extremely problematic to health especially for those with candida overgrowth or gut imbalance issues.

Using wheatgrass to detox is much safer than daily green smoothies, which carry the risk of kidney stones and painful oxalate buildup in tissues. If the wheatgrass is too strong, try it mixed with fresh ginger juice for a healthy power shot. Or, be sure to follow these tips for making safe green smoothies.

Most important to me at the time was the experience of nutritional pioneer Ann Wigmore in using wheatgrass juice. She regularly incorporated its use for detoxification for many years with great results.

Gelatin is collagen that has been broken down into its basic components by reacting with water through a process known as hydrolysis. Collagen is the main component of bones, tendons, cartilage, and skin. It is also plentiful in homemade stocks. It is so important to learn how to make bone broth at home before you get pregnant!

Gelatin has been demonstrated to soothe and heal the intestinal mucosa. In 1905, Erich Cohn of the Medical Polyclinic of the University of Bonn recommended gelatin to people with what is known today as Irritable Bowel Syndrome or IBS.

Probably the most exciting thing about gelatin that even people who are familiar with bone broths don’t generally know is its role as a very safe method to detox your body.

This is due to the large amounts of the amino acid glycine which assists the liver with its housecleaning duties.  The simplest of all the amino acids, glycine can be produced by the body and is therefore not considered essential, although the ease of the body in manufacturing glycine as needed is probably highly contingent upon whether a person is in radiantly good health!

The ability of the liver to do its job sufficiently is limited by the amount of glycine that is available so it makes sense to provide the body with all that it could possibly need through plenty of bone broths, ideally a small cup with every meal.

Given the toxicity of our world today and the high level of chemicals in our air, water, and food, large amounts of glycine in the diet through regular consumption of bone broths has become one way to assist the body with the nearly constant detoxification that is required to maintain health, in particular, detoxification before pregnancy.

Prior to the Industrial Revolution, home preservation of vegetables and fruits was accomplished without the aid of canning, refrigeration or freezing.

The traditional method for the preservation of milk, vegetables, and meat involves a process called lacto-fermentation. Lactic acid preserves food by inhibiting putrefying bacteria. This organic acid is produced by a beneficial bacterium present on the surface of all plants and animals – even our own skin!

The process of lacto-fermentation works in a similar manner with plant foods, transforming cabbage into sauerkraut and cucumbers into pickles.

Regular consumption of traditionally fermented foods and drinks promotes the growth of healthy flora and overall balance in the intestines. A 1999 study published in the Lancet found that consumption of lacto-fermented vegetables in children was associated with low rates of asthma, skin problems and autoimmune disorders in general.

Lacto-fermented foods are rich in enzymes as well as beneficial bacteria. Think of them as “super-raw” foods that will help detox your body and prepare it well for the rigors and nutrient drain of pregnancy.

Regular soaking with Epsom salts or magnesium flakes will help to open the elimination channels both via the skin and the gut to rid the body of unwanted toxins. If you use salts instead of flakes, be sure to buy magnesium sulfate that is human grade only.

Vinegar baths are another gentle cleansing ritual to consider. If you don’t have a tub, foot baths can work too.

A weekly soak of baking soda and sea salt (1 pound of each) for 30-45 minutes helps detox your body of accumulated radiation according to nutritional pioneer Hazel Parcells. It is a good practice after airplane flights or exposure to x-rays.

For more information, this article on the various detoxification bath recipes can help.

According to a University of Rochester Medical Center study, exposure to the pervasive environmental pollutant dioxin alters the induction of milk-producing genes occurring around the very first week of pregnancy.  This has the effect of decreasing the number of ductal branches and mature lobules in the mammary tissue which can in turn negatively affect breastfeeding.

Diana West, coauthor of The Breastfeeding Mother’s Guide to Making More Milk, says that there has been a dramatic increase in recent years of women who are having trouble producing enough milk for their babies, likely due to environmental contaminants like dioxin.

Fortunately, food can be protective of exposure. True Vitamin A found in plentiful amounts in saturated animal fats plays a unique role in protecting a woman from environmental pollutants.

Therefore, any detoxification regimen for a woman preparing for pregnancy should include generous amounts of grass-fed dairy and other animal fats like egg yolks and liver which contain plentiful amounts of true Vitamin A.  Note that while carotenes in plant foods can be converted to Vitamin A in the body, the conversion rate is very inefficient at best and may not occur at all at worst for those with gut problems. Plant foods cannot be relied upon for adequate Vitamin A.

Toxic metals lurking in body tissues are a potential harm to a developing baby.  Hair analysis and other tests from a professional can determine with certainty whether or not this is a problem for you. In lieu of expensive tests, however, a simple supplement consisting a tablespoon of food grade diatomaceous earth per 100 pounds of body weight per day in a glass of water can be used to detox your body by pulling toxic metals from the digestive tract.

Please note that while a gentle detox for pregnancy is a good idea, detoxification while pregnant and breastfeeding is most definitely not!  If any physical discomfort is experienced, this article outlines ways to quickly relieve detox symptoms.

* Be sure to watch out for these top 4 cleansing myths that especially should be avoided before pregnancy as they are very depleting!

7 Ways to Avoid Detox Symptoms on a Cleanse

Natural Deworming Methods that are Safe and Effective

Detox Baths: Which are Best and for What Ailments

How to Do a Hair Detox and Enjoy Healthy Locks Naturally

Juicing 101: Why Do It, Which Juicers are Best, Recipes to Try

Mad as  Hatter: How to Avoid Toxic Metals and Clear Them from Your Body

Hazel Parcells in Her Own Words