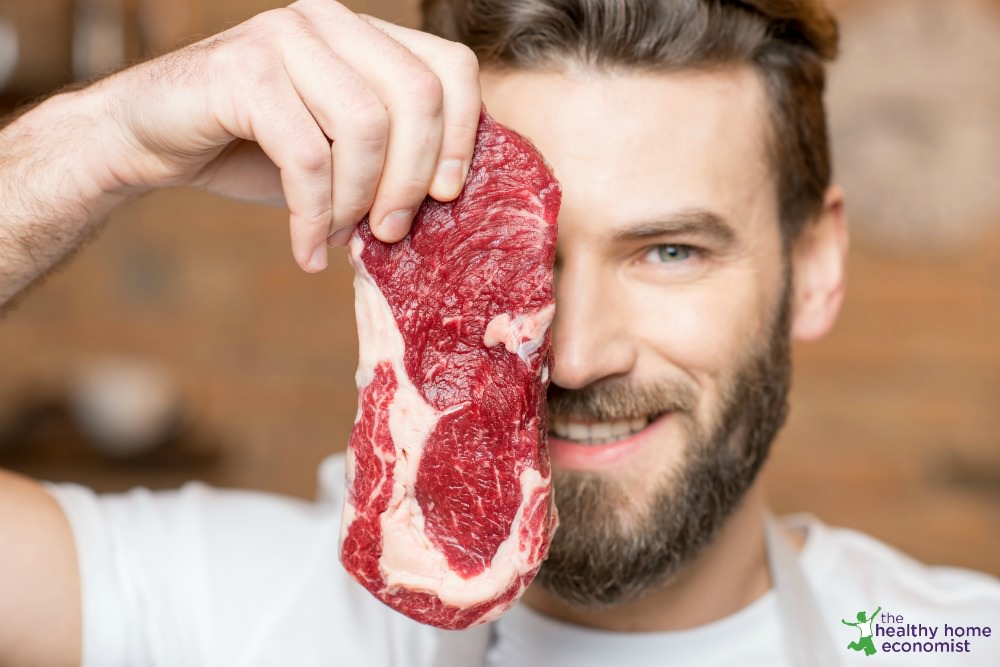 The world of food and nutrition has no lack of charismatic and entertaining personalities. At times, I’ve wondered if this is a relatively new thing born out of the Industrial Revolution’s global disruption to food production. At least for the last couple hundred years, extreme diets coupled with extreme personalities have typically gone together. The latest food philosophy that qualifies on both fronts is the carnivore diet.

The first time I read about an all meat diet, it was because of an enigmatic man named Vilhjalmur Stefansson. A Harvard professor, he left his post to become an anthropological researcher on a polar expedition.

After this adventure in the Arctic, he began to champion an all meat diet. He even went so far as to spend an entire year with another researcher to study the effects of an all meat diet on the human body. (1)

One proponent of the modern version of the carnivore diet is Mike Fishbein. Given that Stefansson’s experience of the diet started with Eskimos and fish, I find this a bit of historical humor. Here’s how Mr. Fishbein describes a meat only diet.

The carnivore diet – also known as the all meat diet or the carnivorous diet – entails eating almost nothing but meat for every meal, every day. That means a lot of protein, a lot of fat, and almost zero carbs… The carnivore diet is based on the theory that our ancestors ate mostly meat because it wasn’t energy efficient to gather a lot of fruit or vegetables. As a result, our bodies have evolved to run optimally on a meat-centric diet. So the theory goes. (2)

Is this ultra high protein, high fat, zero carb diet which even includes raw meat ever a good idea? Or is this way of eating something only a meathead would consider?

Is a Carnivorous Diet Healthy?

The most well known proponent of a carnivorous diet is Dr. Shawn Baker.  He has appeared on shows such as Joe Rogan and has a book covering his approach to a diet of mostly meat.

Unlike Paleo or other diets, there really isn’t much variety to debate about the carnivore diet. Nor are there too many subtleties. You eat animal foods like meat and eggs, period! Some versions also include dairy since this is an animal food as well.

Other proponents of the diet rightly point out that the world has yet to produce a civilization which followed a vegan diet from childhood through death for multiple generations. This indisputable truth runs contrary to agenda driven books such as The China Study and the documentary What The Health.

On the flip side, numerous examples exist throughout recorded history of healthy people from a variety of cultural, ethnic and geographical backgrounds who lived for generations on mostly meat diets.

Anthropologically speaking, real world examples of cultures eating all meat diets for long periods of time for multiple generations is much more instructive of the wisdom of such a practice than conventional scientific studies conducted over short periods of time in which one group of people eats a little more meat or a few extra servings of vegetables than another group of people. (3)

An important aspect of a properly implemented carnivore diet is the need to embrace “nose to tail” cuisine in order to ensure optimal health. This is an extremely important and yet frequently overlooked point.

One reason eating lots of meat may be harmful today is because of the imbalanced way we consume animal products. Modern people consume almost nothing but muscle meat, ignoring the skin, bones, and organs that provide vital nutrients and compounds and also balance out the protein and nutritional profile of muscle meat. Over time, this leads to a systematic amino acid imbalance, which research has consistently linked to inflammation, lower life span, and other problems.

Is an All Meat Diet Historically Accurate?

As people familiar with the research of Weston Price know, when he set out on his work, he expected to find that the healthiest groups consumed the least animal products. In fact, he was apparently disappointed that he failed to find a vegetarian culture that exhibited the same health and vitality as those that ate meat.

But unlike modern researchers, who tend to fudge things to fit their beliefs and expectations (or those of their corporate sponsors), Price soon realized that animal foods were crucial to human health writing about it in his book Nutrition and Physical Degeneration.

Dr. Price came across two very healthy people groups that qualified as carnivorous cultures. The Eskimos ate almost exclusively meat and fat. The African Maasai ate meat, milk and blood with very few plant foods. It is worth noting that the Maasai were dominated by the stronger, better physically proportioned Dinkas, who ate a more balanced diet of about 50% animal foods and 50% plant foods.

Does a Carnivore Diet Work for Anyone?

On point criticism of the carnivore diet is the selective sampling of people groups used to justify it as an ideal diet for the rest of humanity. Many of the all meat or mostly meat eating ancestral cultures often adopted (and thus adapted) to such a diet because of extreme environmental conditions – not because of choice!

The groups cited are either arctic, sub-arctic or desert dwelling tribal type groups. Under these conditions, other foods are scarce with unpredictable availability.

When you look across all of the world and history, you find that all sorts of people groups enjoyed excellent health on mixed diets. Some with more access to animal products than others, some with less. But, there are NO healthy people groups that don’t consume at least some animal foods.

The big benefit of an extreme diet like the carnivore is that it smashes to bits the dogma about saturated fat and cholesterol causing heart disease, that while completely discredited, still haunts modern American nutritional advice. Certainly, the decent bloodwork of those on a good quality carnivore diet is convincing enough to the average person of the folly of a lowfat diet.

In both the “surf” eating Arctic groups and the “turf” eating African tribes, heart disease and similar ailments were unknown until the introduction of modern foods. (4)

The carnivore diet does overlap – but not much – with a ketogenic, paleo or low carb diets.

Indeed, a carnivore diet makes the carb restrictions of even the keto diet look rather mild!

Keto now has a fair and growing body of research behind it. On the other hand, the carnivore diet, save the earlier work involving Steffanson, hasn’t been studied much. Thus, not much research exists on how to set up ratios of fat to protein, etc. to give you guidance. (5)

The only exception to the carb intake is if you consume fresh dairy. Fresh and some fermented dairy products can contain a fair amount of carbs (unless the whey is removed a la Greek yogurt). Some carnivores embrace them while others don’t.

As I mentioned earlier, for those on this diet, it is vital to embrace a nose to tail approach to eating, balancing muscle meat with the rest of the animal and the animals products – including eggs and milk. If this is not done, the carnivore diet will be an unhealthy rather than healing experience.

One of the most fascinating parts of this diet is talking to people who are on it. I have no less than half a dozen friends who consume an almost all meat or animal product diet. Often, much of it is raw! While on this diet, a few were able to overcome chronic, quite severe health conditions such as Lyme disease and other autoimmune issues. Achieving these almost unbelievable results had eluded them on any other diet or doctor prescribed protocol.

Moreover, some have sustained this diet for over a decade or more with continued good results. No problems, deficiencies, or other issues emerge when following a nose to tail carnivore diet.

My experience within my circle of friends isn’t uncommon. As one researcher put it, “I’m not sure that the carnivore diet is optimal for everyone, but in light of all the n = 1s, it’s hard to say it doesn’t provide amazing results for a lot of people.” (6)

As with so many things health and diet related, what works for some doesn’t work for others. If the carnivore diet works for you, it can be a powerful way to protect and improve your health.

If you are going to go all carnivore, I can’t caution enough that you need to eat good quality meat. Industrial meat is loaded with all sorts of problematic leftovers and residues. The source of these toxins is primarily low quality animal feeds laced with antibiotics, pesticides, GMOs, antibiotics and other drugs.

Pasture raised, grassfed (for ruminants), naturally or organically fed animals are absolutely a must on a meat heavy diet. Depending on the amount and type of animal products you consume, this will definitely increase your food cost.

If you are wondering how to cook these types of meats, numerous recipes for grassfed meat and pastured poultry dishes are found on this blog!

If you have a large family, going carnivore can quickly tally up. In any food budget, good quality meats are definitely some of the most expensive line items. Be prepared for an easy doubling of your food bill on a monthly basis unless you have the ability to source and process some of the meat yourself. Buying in bulk (i.e., an entire cow including bones and organs) will greatly reduce the cost as well.

At the same time, carnivorous eating certainly simplifies cooking. Many doing the carnivore diet report not just improved health, but a whole let less time spent in the kitchen. The reason is that almost all the foods that take a great deal of careful, traditional preparation such as grains and legumes or lots of cutting and processing are removed from the diet.