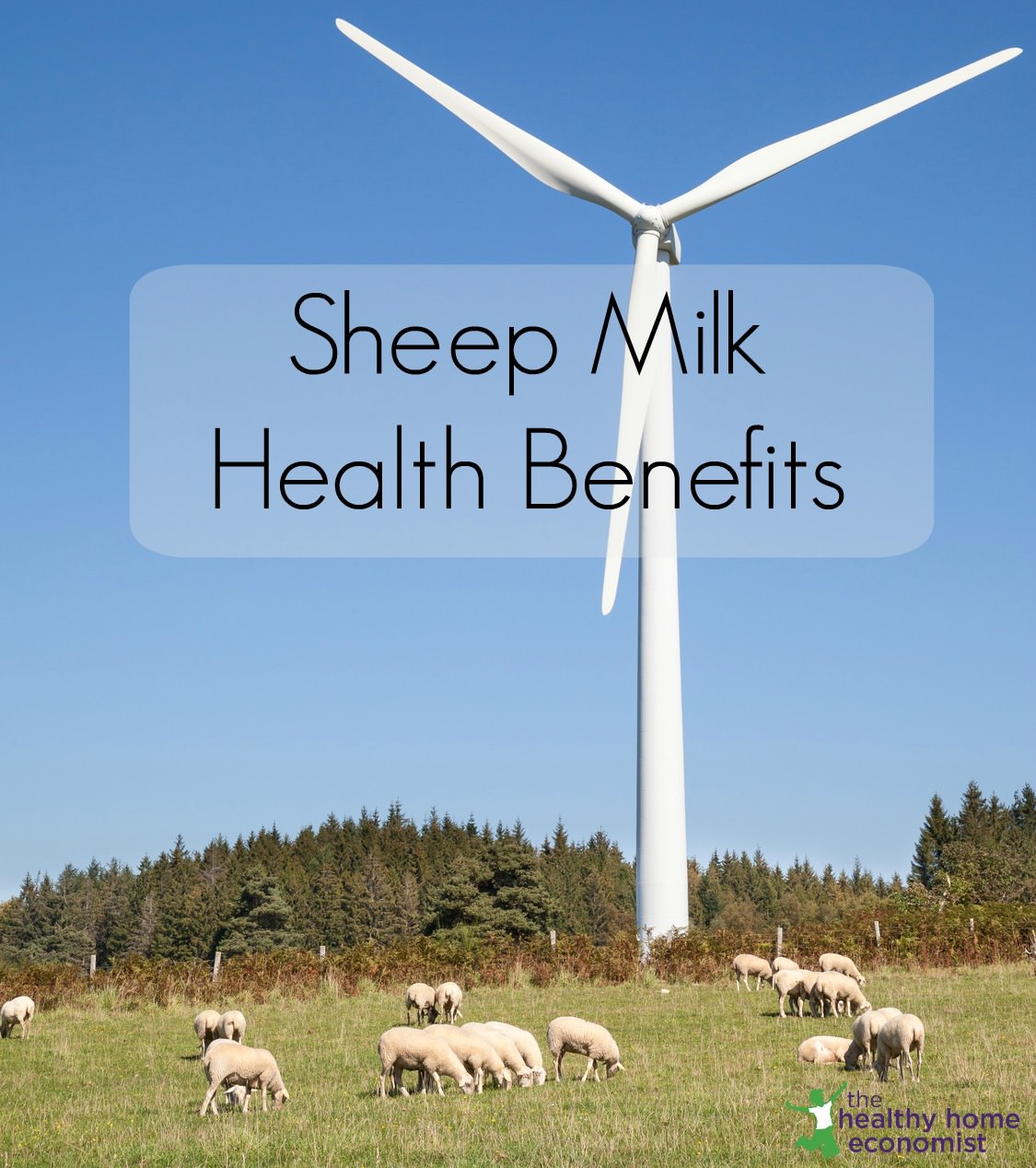 When people ask me what type of dairy milk I prefer, they are usually surprised when my answer is sheep milk! I particularly adore sheep milk cheese and when it is seasonally available locally, I stock up.

In my travels across parts of Europe last summer, I was pleasantly surprised to see that sheep milk is readily available in some places that I visited. It’s even available at some farmers markets in the larger cities! This is in contrast to North America, where fresh sheep milk is extremely hard to find, and sheep dairies are few and far between.

On the other hand, quality sheep milk yogurt is becoming more commercially available in the United States. More on this trend below.

Sheep and humanity have coexisted together for thousands of years. In fact, sheep were milked by humanity even before cows!

As mentioned above, sheep milk is not widely available in North America yet, as the industry is still in its infancy. But it is rapidly gaining in popularity with two breeds most common:

Sheep milk is much more prevalent in other parts of the world, particularly in countries that ring the Mediterranean Sea. Currently, sheep milk represents a little over 1% of the world’s total milk production. Most of this is made into cheese. In France, Lacaune is the sheep breed of choice with the milk used to make the world famous Roquefort cheese. (1)

Much of the reason for the rarity of sheeps milk is due to low milk production from these dairy animals no matter the breed. The typical ewe averages less than ½ gallon of milk per day! Compare this to grassfed cow or goat milk. Depending on the breed, grassfed cows produce anywhere from 2-8 gallons of milk per day. After kidding, a goat often produces a gallon or more of milk per day. Nigerian Dwarf goats produce less because they are smaller – around 1/2 gallon per day. (2)

Of course, like cows and goats, ewes can be injected with hormones to increase production. But who would want to drink that kind of milk? Not the typical consumer that is seeking sheep milk, that’s for sure! People who don’t care if their dairy animals are abused and otherwise subjected to drug based assaults usually mindlessly buy their milk at the supermarket not from small family farms producing sheep milk!

Four distinct sheep milk benefits stand out in comparison to other types of dairy:

Like goat milk, sheep milk is naturally homogenized. This means that the fat molecules are small enough to stay suspended in the milk. This makes for an easier digestive experience for some people.

Cow milk (as well as water buffalo milk) is not naturally homogenized. Thus, commercially produced cow milk even if organic is usually forcibly homogenized, which oxidizes the cholesterol making it dangerous to consume. Factory homogenized milk should be avoided without exception.

Non-homogenized cow milk from small farms has a distinct creamline at the top, particularly high butterfat milk from old fashioned breeds like Jersey, Devon, and Guernsey. The creamline from the milk of holstein cows is much smaller and harder to identify.

A huge benefit of sheep milk is that it contains more cream than any other type of dairy. This is why sheep milk is so prized for making cheese as it produces a higher yield per gallon.

Most exciting, sheep cream contains plentiful amounts of conjugated linoleic acid (CLA) and medium chain triglycerides (MCTs). These two types of fatty acids are particularly beneficial to health and rare to find in other foods.

A2 milk has become a bit of a buzzword recently. Some commercial dairy companies are even marketing their milk as A2 milk from A2 cows.

The A1 milk versus A2 milk discussion relates to the type of beta casein proteins contained in the milk of a dairy animal, particularly as it relates to cow breeds. A2 beta casein is better tolerated by some people otherwise sensitive to A1 beta casein.

Clearly, how a dairy animal is treated, what she eats and whether she is subjected to drug based assaults are the most important considerations, not A1 or A2 genetics. I would certainly take the raw A1 milk from a grassfed family farm over factory processed commercial A2 milk (usually overpriced) any day of the week!

However, when it comes to sheep (and also goats and camels), the discussion is moot because all breeds are A2. So if you are seeking A2 milk and have a source for sheep milk, know that without exception, the milk is A2. This is true even if there is no genetic testing of the herd. This is important, because A2 milk from cows is usually very expensive due to the genetic testing required.

High in Vitamins B12 and Folate

Sheep milk is extremely high in vitamin B12 and folate. In fact, it is nearly 50% higher in these nutrients than cow milk and 7-8 times higher than levels in goat milk. (3)

At first, you might think that this is no big deal. Just take a multi-vitamin if you need B vitamins, right?

It’s true that folic acid is easy to get. It is found everywhere including supplements and fortified foods. However, folic acid is not the same as folate. It is the dangerous, synthetic form of folate. Natural folate is a bit harder to come by. Eating foods high in folate (B9) is very important particularly during pregnancy.

B12 is particularly elusive. Most vegans and vegetarians are extremely deficient and are in danger if they don’t supplement because no plant foods contain B12 in usable form. Even omnivores tend to be very deficient, which is why consciously selecting animal foods high in B12 is a smart move for long term health.

Great Use for Sheep Yogurt!

As mentioned at the beginning of the article, the most widely available form of sheep milk particularly in the United States is sheep yogurt.

This yogurt is of course delicious to eat, but it has another great use … to make safe and nutritious homemade baby formula!

Most health conscious mothers who cannot breastfeed ask the question “how do I make baby formula?” to avoid dangerous commercial formulations. Even organic powdered baby formulas contain arsenic from the heavy use of brown rice syrup.

The best homemade formula is traditionally made with safe raw milk (along with some other important ingredients), but when this is not an option, using yogurt is the next best thing. The good news is that sheep yogurt is widely available (many Whole Foods carry it) and is made on small family farms rather than at a Big Dairy processing plant.

Using yogurt made from sheeps milk has another advantage. No extra cream needs to be added to the formula because sheep milk has significantly more fat than either cow or goat milk. (3) This is true even for cow breeds known for producing milk with a large creamline.

Sheeps milk is also higher in lactose than cow or goat milk. However, when sheep milk is made into yogurt, the lactose is converted to beneficial lactic acid. So the addition of lactose to homemade baby formula made with sheep yogurt is still necessary to mimic breastmilk as closely as possible.

If raw milk is unavailable in your area and shipping in unpasteurized camel milk to make baby formula is out of reach of your budget, consider the healthful and well tolerated sheep yogurt available at many healthfood stores instead.

Whatever you do, never ever use milk powder from any dairy animal to make homemade baby formula! It is a heavily processed, denatured and allergenic food. 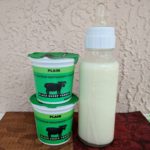 Homemade formula made using sheep milk yogurt which is becoming more available across North America and around the world.

*Do NOT use powdered whey from the store as it is denatured.

Collagen powder may be substituted for the gelatin in a pinch (more on peptides in baby formula in this article).

Use only cold pressed, unrefined, low oleic, organic sunflower oil for this recipe. The brand linked to in the ingredients list is recommended as there many different types of this oil on the market.

If you are wondering where is the iron in homemade baby formula, this article provides an explanation.

If the formula becomes slightly congealed in the refrigerator, it is due to the gelatin. It will re-liquify when warmed for your baby's next bottle.