The pros and cons of substituting hydrolyzed collagen peptides for grassfed beef gelatin in homemade baby formula whether made from cow or goat milk. 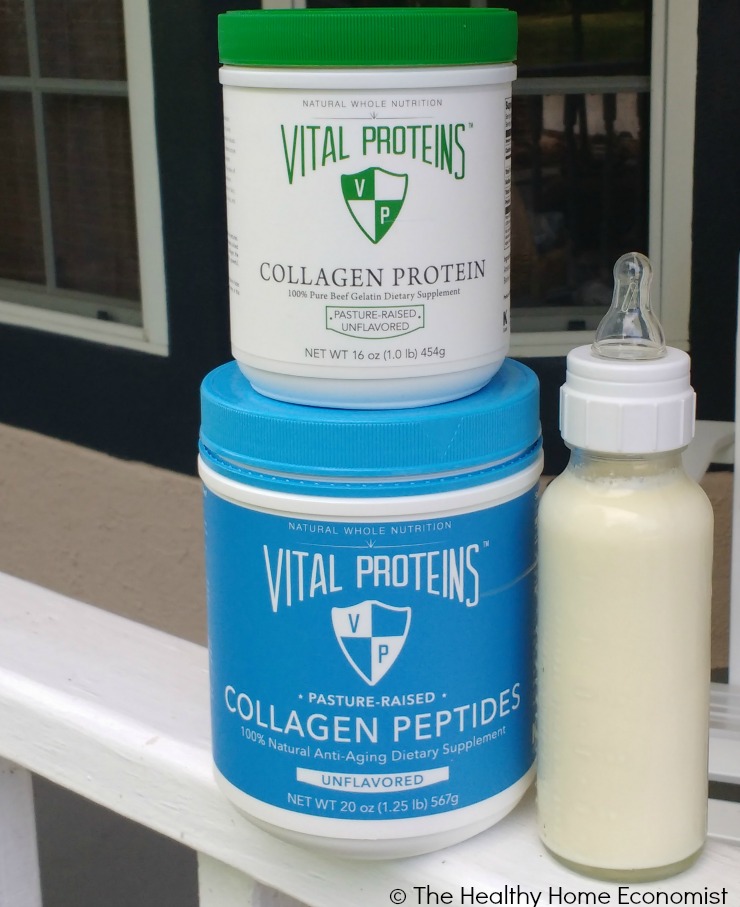 Mothers who are unable to breastfeed or procure a sufficient quantity of quality donor milk to feed their babies are increasingly turning to a homemade baby formula recipe made with whole, unprocessed ingredients to fill in the gap.

This is because a growing body of research suggests that commercial formula is not only bad for babies, it may very well damage their health for life. Most recently, scientists discovered unlabeled and unregulated nanoparticle additives in every single powdered baby formula tested. This included Gerber, Enfamil, Similac and Well Beginnings products currently available on store shelves (1).

As the popularity of homemade baby formula continues to grow within health-conscious communities around the globe, so do attempts to make the process of whipping up a batch ever faster and more convenient.

One very obvious way to reduce the time required to make a batch of homemade formula is to substitute collagen peptides (aka, hydrolyzed collagen or collagen hydrolysate) for the gelatin in the recipe.

The Case for Peptides

Making baby formula would definitely be an easier process if peptides were substituted for gelatin.

The biggest reason is that peptides dissolve in liquid no matter what the temperature while gelatin requires warm to hot liquids. This would allow all the formula ingredients to be conveniently blended together in one step, which eliminates the necessity of warming the water portion of the formula in a small pan on the stove first (not a microwave) in order to dissolve the gelatin before adding in the other ingredients.

Using peptides instead of gelatin also eliminates the problem of the formula congealing slightly when refrigerated. While this problem is not a safety issue or really a problem at all, as it is resolved when a bottle of the formula is warmed up for baby, it can sometimes alarm parents who are making the formula for the first time.

From a nutritional perspective, collagen peptides have a very similar amino acid profile to gelatin and look and taste almost exactly the same. They are processed in a similar manner and are made from the same ingredients.

Both collagen peptides and gelatin remain hydrophilic even after cooking or heating too. This means that both attract digestive juices in a manner similar to raw foods. All other cooked foods repel digestive juices, making gelatin and peptides unique in how they benefit the digestive process.

Seems like a no brainer to make the substitution!

However, before you make the change in your home, here are some guidelines to consider.

When to Try Peptides Instead of Gelatin in Baby Formula

While most babies tolerate the gelatin just fine, when a parent emails me that their baby is gassy or fussy after feeding, one of the first things I typically suggest is to try removing the gelatin and/or the nutritional yeast from the formula and see if that helps.

If this is the situation for your baby where the gelatin is not well tolerated, then, by all means, try the peptides instead. The manufacturing of peptides is more intensive than the processing of gelatin, which breaks up the amino acid chains (protein) into smaller units. This can make them a bit easier to digest than gelatin for some people with, especially sensitive digestion.

Another reason to substitute the peptides for the gelatin is when the baby has an allergy to beef. While rare, this type of allergy is on the rise, and I have definitely had a few parents email me about it over the years.

Grassfed beef gelatin is the type recommended for the homemade baby formula (tested free of glyphosate residue). If an allergy is present, it may be prudent to try the wild marine peptides (tested for purity) instead.

When Not to Substitute Peptides

If your baby is doing well with gelatin added to the homemade formula, then it is not advisable to substitute the collagen peptides just for the sake of convenience.

While collagen peptides are a bit easier to digest than straight gelatin for some people, remember that extra processing is required to make peptides.

Providing baby with ingredients that are processed as little as possible is the optimal approach as long as the gelatin is not causing any issues.

In other words, if it ain’t broke, don’t fix it! Stick with the original homemade formula recipe devised by the brilliant food scientist Dr. Mary Enig, co-author with Sally Fallon Morell of the nutritional classic Nourishing Traditions.

6 Strategies to Safely Detox Your Body for Pregnancy