Healthy Home Economist / Archives / Raw Milk History / A1 and A2 Milk: Do Cow Genetics Even Matter? 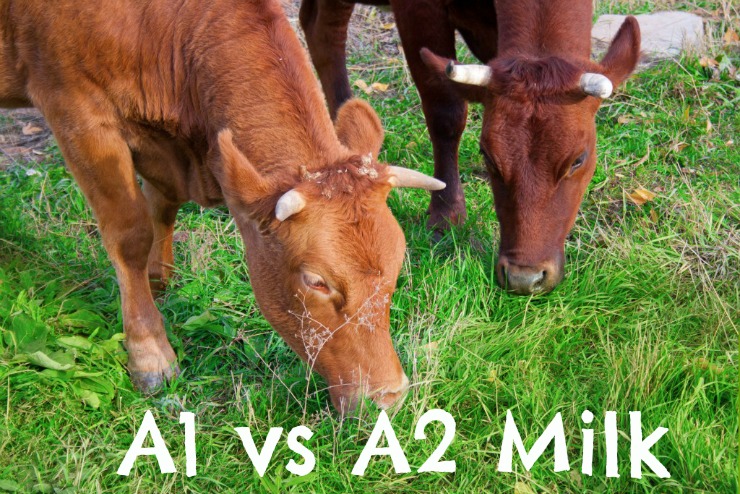 Four years ago, I wrote an article and filmed a video about the differences between A1 and A2 milk.  The A1 versus A2 factor refers to the different type of casein in raw milk from various breeds of cows.

Note that sheep milk, goat milk, and camel milk are all A2 milk regardless of breed.

Much of the hubbub regarding A1 versus A2 milk at that time and in the ensuing years resulted from an article written by Dr. Tom Cowan based on the book The Devil in the Milk which claims that cows made a genetic split about 5,000 years ago which resulted in Holsteins and Friesians (black and white cows) becoming favored for domestication because of calmness and other traits.

These cows became the A1 dominant cows of today which supposedly produce milk which acts like an opiate when consumed and which epidemiological studies have implicated in heart disease, Type 1 diabetes, autism and schizophrenia.

The book also claims that old fashioned breeds of cows produce A2 milk that is far healthier and that genetic testing is required to determine if a cow has A1 or A2 genetics.

As I have read more about this issue, it seems that in reality, we have no way of knowing whether any of this is true or not. There is no other research that confirms this historical split. If this genetic divergence truly occurred 5,000 years ago and A1 milk  is one of the sources of heart disease and makes autism worse, why doesn’t this match up with what other researchers are finding?

Unnatural feeding of dairy cows, confinement and pasteurization/homogenization that got started early in the last century are far more likely culprits for any health issues associated with milk consumption, not cow genetics.

If fact, in the comments section of that post I wrote four years ago, Mark McAfee, Founder of Organic Pastures Dairy in California, said the following:

I agree with much of what you have shared….but let me help out by filling in the blanks a little. I am very close to this A-2 subject matter and can help clear the air.

Dr. Cowan has privately apologized to me for writing the forward to The Devil in the Milk. He said that if he knew then what he knows now he would not have said what he wrote.

Keep up the great teaching and nutritional work!!

I recently emailed Mark to see if he had any additional information on the A1 and A2 milk issue, and he responded by saying that he would be attending the upcoming International Milk Genomics conference in Aarhus, Denmark, where A2 will be discussed in depth.  But, at the present time, his opinion is the same – that the jury is still out on the A1 versus A2 milk issue and whether cow genetics is of any importance whatsoever.

Should You Care About A1 and A2 Milk?

The most important thing for the consumer at the present time is to ensure that the farm they purchase their milk from has a healthy herd which grazes on well kept, unsprayed green pasture. In addition, visual examination of the milk to assess the size and color of the creamline indicating the presence of fat soluble vitamins and co-factors is most important.

Organic Pastures Dairy in California seems to be of the same mindset.  The FAQ on the OP website says the following:

We do not test for A1/A2 genetics.  It is our opinion that raw, non-homogenized milk, from organic cows that graze on pasture makes the most nutritious milk.  We have 10 different breeds that make our milk delicious and nutritious.  We believe the genetic diversity of our cows adds to the overall nutritional diversity of their milk.

The A1 and A2 Factor in Raw Milk

Why Milk Is Not Just for Baby Cows