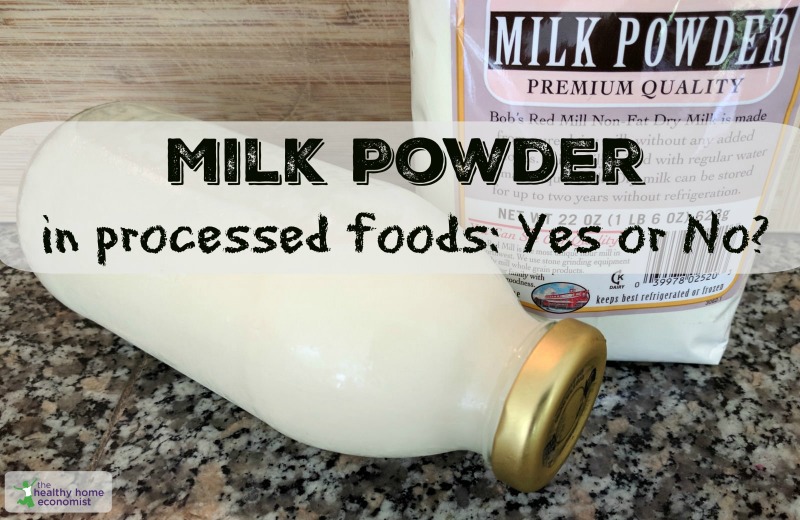 Milk, it does a body good. Or does it? Or did we do something bad to it?

Dairy in the modern world has come a long way from just the cow. Pasteurization, homogenization, and dozens of 5+ syllable words are needed to even begin to capture the industrial processing that dairy now undergoes today.

You wouldn’t think that a food that is 85-95% water would be a good candidate for turning into a dry powder.

But Big Food thought otherwise. So along with all the other processed and pseudo dairy products that line our stores and shelves, we have powdered milk.  And wow, it is added to A LOT of foods both organic and conventional. From baby formula to milk chocolate and everything in between, milk powder is a very important ingredient to the industrialized food system.

But why do this to dairy? How do food companies make this stuff?  And what does it do to us? Does organic powdered milk pass as safe food for us to consume?

The History of Powdered Milk

In similar fashion to modern rice syrup, it seems a few traditional people groups consumed something similar to milk powder. During Marco Polo’s explorations, he came across Mongolian Tartar troops:

They also have milk dried into a kind of paste to carry with them; and when they need food they put this in water, and beat it up till it dissolves, and then drink it. [It is prepared in this way; they boil the milk, and when the rich part floats on the top they skim it into another vessel, and of that they make butter; for the milk will not become solid till this is removed. Then they put the milk in the sun to dry. And when they go on an expedition, every man takes some ten pounds of this dried milk with him. And of a morning he will take a half pound of it and put it in his leather bottle, with as much water as he pleases. So, as he rides along, the milk-paste and the water in the bottle get well churned together into a kind of pap, and that makes his dinner. (1)

Powdered milk has come a long way since Mongol days. Modern milk powder is made from nonfat skimmed milk, whole milk, buttermilk, or whey. One of three methods is employed, with spray drying the most common.

The raw dairy is first pasteurized and then concentrated in an evaporator to approximately 50% milk solids.

The concentrated milk is subsequently sprayed into a heated chamber. The heat causes the water in the milk to evaporate almost instantly. What’s left are fine particles of powdered milk solids.

Another method of making milk powder is drum drying. The pasteurized milk is applied as a thin film to the surface of a heated drum. The water evaporates and the dried milk solids are scraped off. You have to wonder what those drums are made of … hopefully, not aluminum or a Teflon coated material like the Teflon coated dies that shape cheap pasta.

The problem with this method is that the powdered milk tends to have a cooked flavor. This is the result of caramelization from the direct contact of the milk solids with the heated drum.

A third method that preserves the nutrients in the milk much better than spray or drum drying is freeze-drying. However, freeze-dried milk powder still comes from pasteurized milk.

First, note that the process of making powdered milk starts with pasteurization. If milk was ultra-pasteurized, that is even worse! Thus, by the time it is finally reconstituted, the milk has generally been cooked twice! This overprocessing significantly damages nutrients and denatures the protein too.

Even milk powders made through the superior process of freeze-drying will have been made from pasteurized dairy.

Also, the storage of powdered milk can lead to further nutrient losses. Both light and warmth can cause a reduction of vitamin A and E levels.

In all cases steeper decline of both vitamins in first 14 days of storage was identified. The highest losses of vitamin A and E in powdered milk occurred during storage in the light at room temperature. The value decreased by 91 resp. 95% of the original value. (2)

Another problem is that the quality of the protein, depending on the way the original milk was processed and other factors, may decrease substantially between manufacturing and consumption. (3) This is similar to the degradation that occurs in protein powder processing even if low temp.

Powdered milk, like most milk products in America, comes from confinement raised animals. These animals are given substantial amounts of antibiotics (around 80% of all antibiotics used in the United States are given to animals!). (4)

Instead of foraging on pasture, they are force-fed large amounts of genetically modified grain. Their natural life span of ten to fifteen years is reduced to as little as three to five. Even if the final product isn’t any more dangerous or damaging than the original, the clear research and studies on all the dangerous and deleterious impacts of conventional dairy mean almost all powdered milk is unhealthy. But some studies do shed light on additional issues with powdered milk.

Studies of milk powder show that the manufacturing process leads to oxidized cholesterol, called oxysterols. This is the dangerous cholesterol – the kind to avoid as opposed to the natural cholesterol in egg yolks, butter and other foods which is beneficial.

“The levels of the different oxysterols are discussed attending to the type of milk. UHT and skimmed powder milks provide the highest concentration of oxysterols. Particularly, high concentrations were found for 7β-hydroxy-cholesterol (up to 205.6 ng/mL), 5-cholesten-3β-ol-7-one (up to 21.8 ng/mL), cholesterol 5α,6α-epoxide (up to 14.9 ng/mL), and 25-hydroxycholesterol (up to 5.1 ng/mL). An increase in cholesten-3β-ol-7-one and cholesterol 5α,6α-epoxide, resulting from the skimming process, was also observed. (5)

The amount of oxidized cholesterol in milk powders is substantial, as much as 30mg/g, or 3% of the total.

Why should we care about oxidized cholesterol?  Because Dr. Fred Kummerow MD, the doctor who succeeded in getting the FDA to “ban” trans fat and who was one of the earliest whistleblowers about the fat and cholesterol fraud foisted upon the US populace stated simply,

Cholesterol has nothing to do with heart disease, except if it’s oxidized… You can have fine levels of LDL and still be in trouble if a lot of that LDL is oxidized. (6)

One of the biggest problems with milk powder is that when the label of a food says “powdered milk”, that isn’t all you’re getting. Many unlisted additives come along with it.

This is possible because the FDA doesn’t consider these additives to be true “ingredients”. Hence, they remain hidden, completely unlabeled on products containing powdered milk. Here are the most common ones:

While organic powdered milk is much safer than conventional because the toxins, GMOs, and antibiotics at the agricultural level are not used, it is best to still avoid it as much as possible.

The reason is that the processing of milk into dry milk powder denatures the fragile milk proteins. This results in exposure to a highly allergenic food for those who consume it which has the potential to trigger autoimmune symptoms.

In addition, the huge problem of oxidized cholesterol still exists with organic powdered milk. Hence, just say no to powdered milk and the foods that contain it especially for children! They need natural cholesterol for their developing brains and bodies, not the oxidized version of this extremely important nutrient!

Avoidance is of particular importance for babies, where some parents are using organic goat milk powder in place of raw milk to make dairy-based homemade baby formula recipes.

Just say no! If you can’t get raw milk, use vat pasteurized yogurt or kefir cultured for 24 hours instead, NOT milk powder!

Some people like to store milk powders to use as food in the event of an emergency situation. Instead of dairy milk powder, a better alternative is coconut milk powder (this quality brand is organic and has no additives).

Coconut milk has no cholesterol and very little protein. Hence, the serious issues of allergenic, denatured proteins and oxidized cholesterol when it is powdered are significantly reduced or eliminated.

Why Eating Organic Alone Won’t Get You Healthy

3 Crucial Reasons You Need More Gelatin in Your Diet

New Guidelines Aim to Double the Number of People on Statins