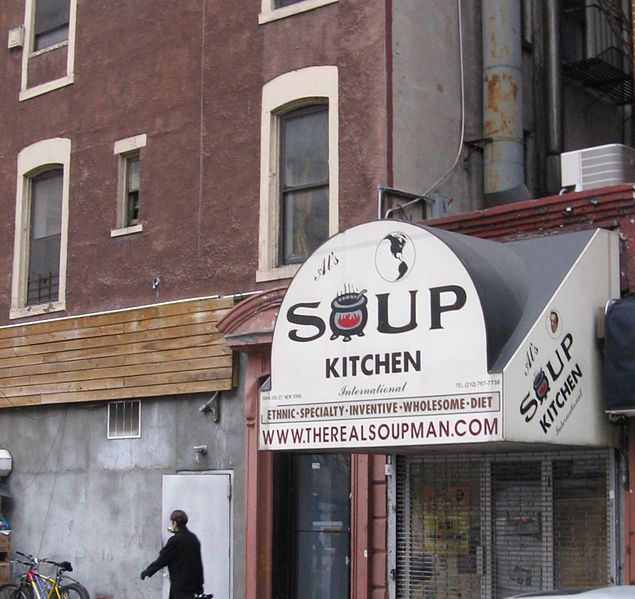 Fans of the beloved 90’s sitcom Seinfeld will no doubt remember the words of the Soup Nazi which were quickly directed at any customer who did not strictly follow his no nonsense rules for standing in line, ordering, and payment at his popular New York deli.

“No soup for you!  NEXT!” the Soup Nazi would shout at the red faced customers who would silently slink away in shame after being lambasted for not adhering to his standards.

The nanny-esque ban, put in place in March 2012, still stands despite city resources stretched to the breaking point by the devastating effects of Hurricane Sandy on the City’s five Boroughs in October 2012.

Perplexingly, the reason for the ban is not the result of homeless getting ill from food contamination!

Rather, Mayor Bloomberg has become New York’s new Soup Nazi by insisting that because the nutritional content of donated food cannot be adequately assessed by the Department of Homeless Services (DHS), homeless shelters are thereby required to turn away all Good Samaritans wishing to donate even such innocuous items as soup and bagels.

Seth Diamond, Commissioner of the DHS, defends the decision saying that the ban is in line with Bloomberg’s passion for improving the nutrition of all residents of New York City.  The measure tightly controls what can and cannot be served at city run facilities for New York’s down and out including portion sizes and the amount of sodium, fat, fiber and calories per serving.

No exceptions to the strict ban are given even for established donation centers with a healthy track record such as Ohab Zedek, an Upper West Side Orthodox congregation which has donated freshly cooked and nutrient rich foods left over from synagogue events for over ten years.

Mayor Bloomberg’s relentless pursuit of a New York food utopia through implementation of his social justice agenda, while well meaning, is certain to fail (note the ban on all sugary sodas larger than 16 oz in September 2012 which head scratchingly exempted diet sodas which are arguably just as bad if not worse as diet drinks have been shown to trigger overeating).

The reason is that is removes all personal choice and responsible actions from the individual – be it positive or negative.  If people want to drink a Big Gulp, they should be free to do so.  And, if citizens like Glenn and Lenore Richter, who lead a team of food-delivery volunteers from their local congregation, want to donate fresh foods to homeless shelters in their neighborhood, they should have the freedom to perform such charitable activities as well.

Attempting to control consumer behavior with a socially “just” agenda cannot and never will accomplish health.  It just creates a populace that becomes highly adept at circumventing the “rules” such as what happened in America during Prohibition.

Should Vegetable Cooking Water Be Saved?

My Awesome Discoveries at the Healthfood Store