You are here: Home / Healthy Living / Many Types of TOFU … Are Any of Them Safe? 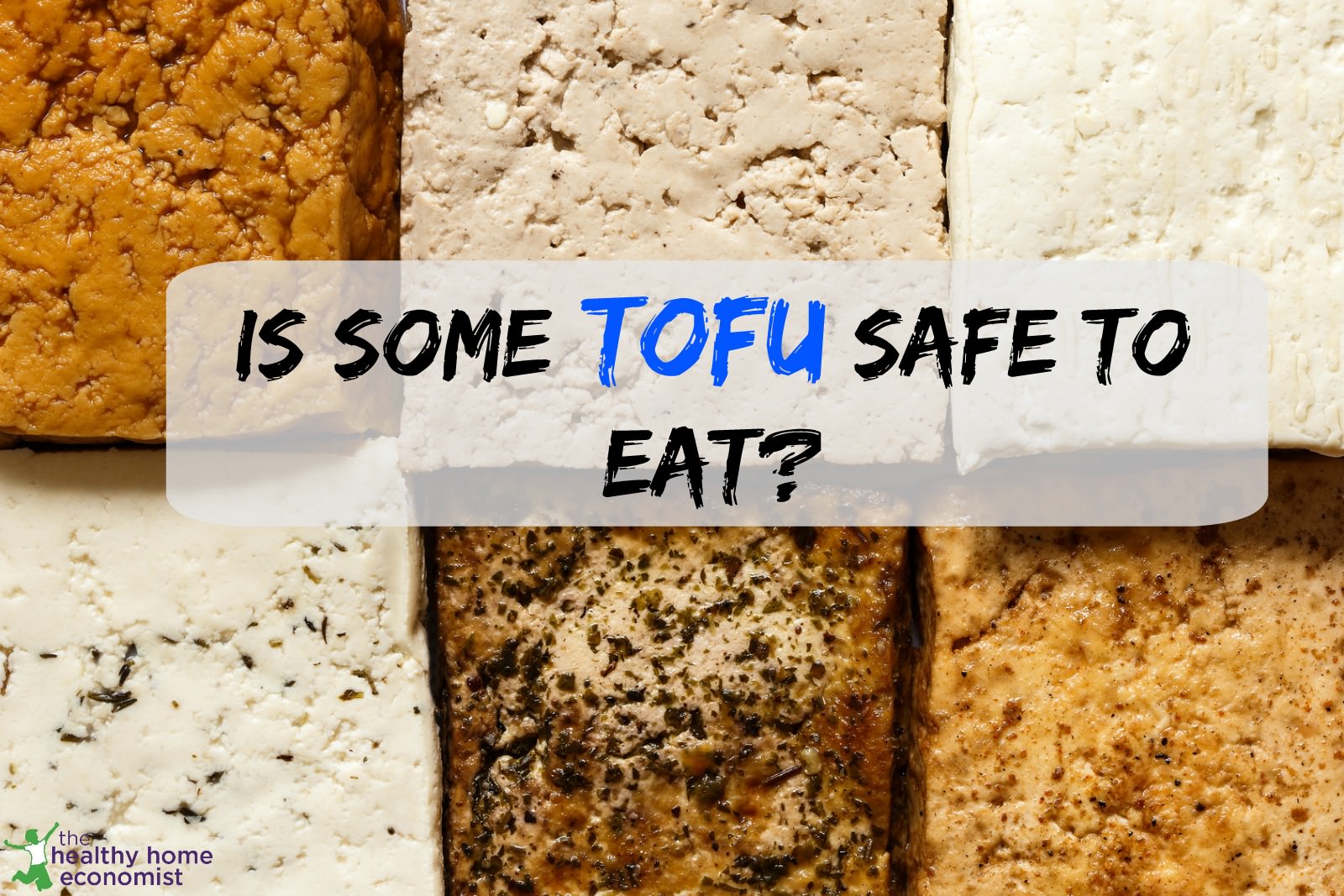 Of all the things on grocery stores shelves, tofu is one of those that is both interesting and repelling at the same time. What exactly is this jiggly food also known as bean curd? Is it a modern invention or authentic traditional cuisine? How is it made? Should I eat it a lot, only occasionally, or take pains to avoid it?

Let’s take a look at this traditional Asian food, its history, safety, and more. Is tofu for you or is it best to be singing the bean curd blues?

What is tofu and how is it made?

Tofu, like miso paste, edamame, soy sauce, natto and tempeh, is a traditional food made from processing soybeans. Asians commonly refer to it bean curd.

Around two thousand years ago, tofu and other soy based foods began their trek across Asia. This occurred as people found ways to process soybeans to remove their extremely high levels of anti-nutrients and other problematic compounds. These included phytic acid and lectins. This traditional preparation usually required months-long fermentation to render them edible. Even still, evidence suggests that traditional cultures consumed soy in very small amounts.

Tofu is an exception in that it is a more processed, traditional Asian food, and one that doesn’t use fermentation. The process is three step.

While ancestral cultures discovered the benefits of bean curd sometime in the 200-0 BC range, it didn’t gain popularity in Asian cuisine for another thousand years. At first, vegan sects such as celibate Buddhist monks primarily consumed it. They discovered that eating a lot of soy dampened their libido and reproductive capacity. (1)

Why is Bean Curd so popular as a “health” food?

Many health conscious consumers view tofu as having an appealing nutritional profile. It is very low in fat and cholesterol. These characteristics make the diet dictocrats pant with delight! At the same time, it is also low in calories, but high in protein, although not complete from a human health perspective. This makes it appealing to people trying to keep their protein intake up without involving animals in the process. Like red meat, bean curd is high in iron too.

In addition, while it is high in calcium and other minerals, this has more to do with the coagulant used to make it than the tofu itself. Because such a wide array of coagulants are used – not just salts, but acids or enzymes – the final nutrition can vary substantially.

Tofu is also popular as a health food because of its history of consumption among some extremely healthy people groups, like the Okinawans of Japan. This anthropological evidence coupled with a nutritional profile that conforms to the misguided lowfat, low cholesterol dietary guidelines makes it a dietitian’s darling. (3)

If you step into a grocery store, is the tofu you see the same as what Asians have consumed for hundreds of years? Maybe yes, most likely no.

Tofu has quickly proliferated into a host of tofu-like products. Some of which have little in common with the traditional food.

Bean curd comes in a variety of textures, typically firm, extra firm, or silken/soft. But these aren’t the only types of tofu we find in the supermarket or healthfood store. It also comes fermented, smoked, dried, fried, and frozen! (4)

Some of these resemble their traditional counterparts, which came about because of the lack of refrigeration and the need to preserve freshly prepared tofu. But given the host of modern ways to make tofu and process it, it certainly makes it difficult to know if what one is getting is even close to traditional tofu without contacting each manufacturer individually to examine the processing used.

Also, kind of like the bastardization of cheese, with all sorts of non-dairy cheeses now filling store shelves, tofu is getting similar treatment. Peanut tofu, almond tofu, egg tofu, and others are now available. Many of these don’t even follow a similar production process to soy tofu, but still try to claim the name (and the associated health benefits) for their own!

The biggest thing to watch out for is the common and totally misguided use of tofu as a meat replacement. This is in no way a traditional use of this food!

In Asian cooking, tofu is eaten in a myriad of ways, including raw, stewed, stir-fried, in soup, cooked in sauce, or stuffed with fillings. The idea of using tofu as a meat substitute is not common in East Asia. Many Chinese tofu dishes such as jiācháng dòufu and mápó dòufú include meat! (5)

For Asians, tofu is a side dish, a supplement to meals, with a wide array of other fermented soy foods as well. In the US and other western nations, tofu often becomes a meat replacement. As a result, vegetarians consume it in far greater amounts than Asians ever would have or did. Worse, the transformation into fake meat creates a dangerous food loaded with additives and MSG.

Asians consume tofu as a side dish, not main ingredients in an entree or meal. It is certainly not a featured feast like the additive and MSG infused Tofurkey gobbled by vegans at Thanksgiving!

Like with a lot of things, there is significant debate over exactly how much soy foods Asians consume, both currently, but also, historically. That debate won’t be settled anytime soon.

GMO Tofu Just for YOU!

Almost all soy grown in the US and in many other places is genetically modified. Thus, if you do consume tofu, make sure it is certified organic. If it isn’t, you are almost certainly getting a hefty dose of GMOs and gut destroying glyphosate residue with every bite!

Warning! Because of genetic drift, even organic soy can have some contamination from surrounding conventional crops. The problem is so pervasive, in fact, that the USDA advises organic farmers worried about the problem to get insurance! (6)

Along with the issue of genetic modification, tofu, like all soy foods contains goitrogens, phytoestrogens, and other problematic compounds.

Why don’t these substances negatively impact Asian populations in the same way as those living in Western countries? There are a few possible or known reasons. First, Asian diets tend to be higher in iodine. This imparts a protective effect from foods high in goitrogens.

Second, Asians generally consume soy foods in moderation, more as condiments or as side dishes and small portions of meals. As noted above, there is vigorous debate on this point over just how much!

People with thyroid or similar issues should be very cautious when consuming any soy foods, including tofu. Contrary to popular belief, fermented soy and sprouted soy also pose risks. For those struggling with fertility issues, remember this before biting into bean curd. Buddhist monks and other such groups traditionally consumed tofu and other soy foods to suppress libido and reproductive functioning.

Tofu contains a fair amount of phytates, which contribute to its firm texture, but they also block proper nutrient absorption. (7)  Frequent consumption can also do a number on digestion because of potent enzyme inhibitors. It can even harm the pancreas.

As if the above wasn’t enough to think twice about chewing on your bean curd, there is more. Tofu has been linked to cognitive and heart issues. On the brain side, a study showed that high intake resulted in cognitive decline. (8)

Another study showed a correlation between tofu consumption, Alzheimer’s and dementia. (9)

Indeed, the safety of soy foods in general and tofu in particular are not settled science by any stretch. Many groups and organizations are battling it out over the studies and science of soy foods and the benefits and dangers to human health. What does this mean for you and me? After all, we need to eat and feed our families every day. We don’t have the luxury of waiting until all this is settled!

FDA About Face: Tofu No Good for Heart Health

An interesting development recently is the FDA’s initiation of a process to revoke the health claim that soy protein reduces the risk of heart disease. This includes tofu. Susan Mayne, director of the FDA Center for Food Safety and Applied Nutrition, said this in October 2017:

To Tofu or not to Tofu?

While mainstream “experts” heartily recommend tofu, it is not a food that appeals to a person well researched in the wisdom of traditional foods.

As a small, occasional part of a nutrient dense, traditional diet that is high in minerals and nutrients, it is probably benign. An example, would be a few cubes of nonGMO tofu in a bowl of miso soup. This assumes that the person eating it does not have a history of thyroid disease or hormonal imbalance.

But in a nation full of people with weight, thyroid, hormone, and other related issues, tofu and dishes made with it don’t appear to make much sense. It simply adds to the already body taxing mix of overly processed foods and damaging chemicals we face.

For those who wish to eat soy foods anyway, make sure they are organic and traditionally prepared. Stick with choices like natto and tempeh, whose fermentation reduces anti-nutrients and increases the overall nutritional value. As for me, I will be enjoying a grass-fed steak with mineral rich reduction sauce instead!

John Moody is an author, speaker, farmer, homesteader, and Real Food activist. Most importantly, he is husband to an amazing wife and five awesome kids. John speaks nationally at a wide range of events, along with writing for numerous publications and consulting for farmers, homesteaders, and food businesses.

He recently published his first book, The Frugal Homesteader: Living the Good Life on Less.

7 Benefits of Annual Breast Ultrasound Instead of a Mammogram
Next Post: High Dose Vitamin C “Flush”: Safe or Risky?